The year’s epic animated adventure comes home when EPIC releases on Blu-ray 2D & 3D and DVD on 7th October 2013, as well as DigitalHD™ on 16th September 2013 from Twentieth Century Fox Home Entertainment. Directed by Chris Wedge (the Ice Age Franchise) the hit film let’s viewers discover more fun, cool characters and amazement hidden in a secret forest like no other. 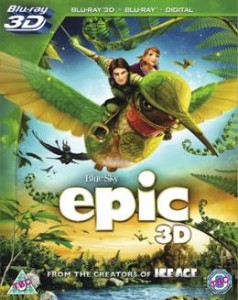 From the creators of Ice Age comes the year’s funniest, most exhilarating animated adventure. Transported to a magical world, teenager, M.K. (Amanda Seyfried) is recruited by a nature spirit, Queen Tara (Beyonce Knowles), to help the “Leafmen” save their forest from evil warriors. The entire family will love this fast-paced thrill-ride, with its astonishing animation and an all-star voice cast that includes Oscar Winner Christoph Waltz and Steven Tyler alongside UK talent in the form of Colin Farrell and Chris O’Dowd.

The EPIC Blu-ray and DVD takes viewers deeper into the forest with exclusive special feature content that will engage kids while they learn about the environment. Exciting featurettes further explore the hidden and wondrous EPIC world — what life would be like for a person two inches tall; more about the birds, bugs & slugs of the magical forest; and how rot can actually benefit our ecosystem.

For your chance to win one of these amazing DVDs, answer the simple question below in our dedicated competition page (USE ONLY THE DEDICATED PAGE & DO NOT SEND MESSAGES OR DO NOT POST MESSAGES ON THE WEBSITE OR ON THIS PAGE AS THE ENTRY WON’T BE VALID – YOU WON’T BE NOTIFIED OF THE WRONG ENTRY) https://londonmumsmagazine.com/competition-area. The question is: ‘What’s the name of Epic film director?’ The deadline to enter is 30th October 2013.

· Birds, Bugs and Slugs: Forest Explorer – journey into the forest to meet the real-life counterparts of the EPIC world

· Rot Rocks – Mandrake might be the bad guy, but his world of rot benefits ours in a number of ways, here you can discover how

· Bugs of Camouflage – find out how bugs use their environment to hide right under our noses, just like the Leafmen

· The Epic Life At Two Inches Tall – how would your life be different if you were only two inches tall? Aside from being small, there are some surprising and amazing benefits.

· Mysteries of Moonhaven Revealed – meet the incredibly talented filmmakers, artists, and animators at Blue Sky, and learn all about the making of EPIC:

Also included in the Blu-ray and DVD is a free in-game currency to grow your epic forest in the globally popular EPIC mobile game “Battle for Moonhaven.”

This entry was posted on Tuesday, October 1st, 2013 at 2:45 pm and is filed under Competitions. You can follow any responses to this entry through the RSS 2.0 feed. You can leave a response, or trackback from your own site.