Exclusive interviews! The Girl from Tomorrow – The cinematic portrait of a woman who reminds us to fight against the laws imposed by the dominant power of men

To celebrate World Day of Italian Cinema which coincides with film director Federico Fellini’s birthday (famous for La Dolce Vita), I share my exclusive interviews with the talents behind The Girl from Tomorrow, the cinematic portrait of a woman who reminds us to fight against the laws imposed by the dominant power of men.

The Girl from Tomorrow is an inspiring and motivational Italian film, presented at the last London Film Festival and to be released in cinemas on International Women’s Day 8th March 2023. It’s the story of a woman who had the courage to do something for our tomorrow. The Girl from Tomorrow is the portrait of a woman who reminds us to fight against the laws imposed by the dominant power of men.

The plot (and true story)

This gripping feature debut by Marta Savina, set in 1960s Sicily, is based on the true story of a young woman violently forced into marriage and who fights for justice

It is 1965 and Lia, a spirited young woman living in a small Sicilian town, is initially attracted to Lorenzo, the son of the most prominent (and possibly Mafia connected) local family. His possessiveness eventually repels her. But soon after, he appears with his cronies to kidnap, rape and force her into a shotgun marriage, all with the collusion of the town’s authorities. Lia and her family refuse to accept this barbaric ‘tradition’ and, despite the constant intimidation and violence, they take their fight for Lia’s rights to court. It’s an extraordinary true story and one that eventually led to a change in Italian law (this only happened in 1981). Directed with great skill, style and sensitivity, this is an impressive first feature by Marta Savina.

I had the pleasure of talking about The Girl from Tomorrow with the star and talents: film director Marta Savina, actress Claudia Gusmano and veteran actor Paolo Pierobon.

MC: Identifying with a Sicilian girl of the ‘60s must not be easy for a girl of today. How did you prepare for this role? What does it mean to you to represent a woman who marked a fundamental step for justice and gender equality?

Claudia Gusmano: It certainly gives you the meaning of our acting work that becomes a mission: communicating, informing, transforming. All the characters are difficult. The choice of generosity you have to put into each character is what makes the difference. Playing such a role could certainly not have had any inner reservations on my part. We worked very little with rationality and a lot with the belly, with the chest, with the body.

We created relationships of maximum trust between us all and I must say that working with Marta means relying on very wide and very welcoming arms. I believe that the beauty of this job is not being afraid of falling, not being afraid of getting dirty and not being afraid of not making a good impression. What woman in the world for once did not feel the ‘duty’ to say yes by force or did not struggle to say no? 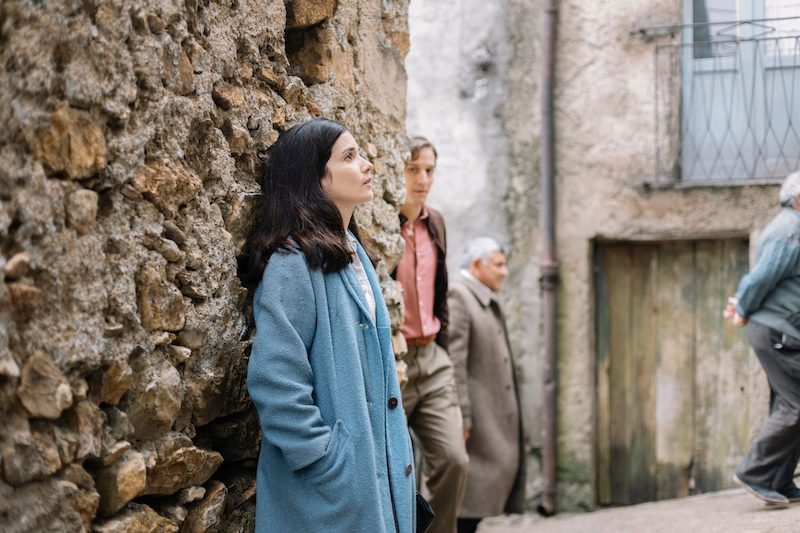 The violence on Lia is not just physical. The peculiarity of physical violence is that you cannot have the body strength to counteract that of a man. This alone makes you feel totally at the mercy of the other. I had to do a great job of deconstructing the character because I’m much older than Lia in real life. I’m 37 years old and I had to go a long way back. It was a wonderful journey because I had to turn this girl into a woman.

I had to work with every part of myself and have the comfort to be surprised by everything that could happen in working with others. Lia’s great strength lies in having done this for herself without thinking about tomorrow.

Nowadays we do everything to be equal to everyone else and not to be noticed and not to make ourselves heard. If you stop, you feel and maybe you really know what your gut is saying.

MC: Listening to the film in the original Sicilian dialect gave me special vibrations and emotions. For you experiencing first-hand the reality of Sicily today, has this law really brought a change in the local mentality? Is it true that ‘fuitine’ are not happening any longer?

Marta Savina: Nobody cares any more. The law changed in 1981. First comes the law and after many years the social change follows. But in 2022, we still live that mentality: if something happens to a woman, then you hear people saying: ‘She went looking for it’ or ‘she had a short skirt’ or ‘she provoked’. 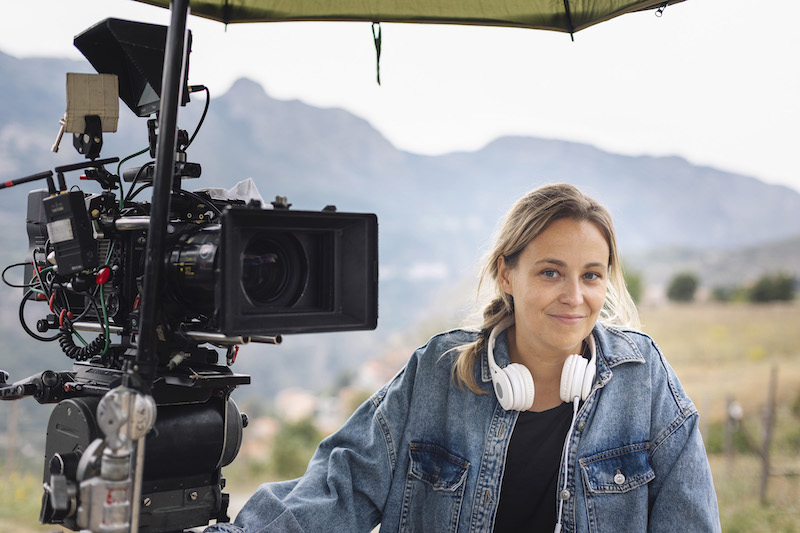 And it is clear that the law here cannot heal. But the law is a starting point from which social change and mentality starts. If there never is a law, it is very difficult for the mentality to change as well. For example, what we are experiencing now in Iran, if one day the law changed so that girls can walk around without a veil, maybe there would always be men throwing stones at them because they are without a veil.

In general, this mentality is extended in a pandemic way even in a city in the north of Italy not only in a Sicilian mountain village. And that’s why I felt it was necessary and I had the desire and urgency to tell this story today. Because it is still a relevant issue.

Through cinema we can try to change the mentality. Cinema becomes popular culture. They are images and sounds that become entertainment, which is important to change thinking.

I hope that it will also be accepted by men. Ironically, the protagonist Lorenzo is a victim and not just an executioner. If Lorenzo hadn’t met Lia, he would probably have children and grandchildren by now. And instead he did the same thing that men did for generations before him and that did not seem wrong to him. But he met the one woman who told him ‘no!’. For me this is the tragic story of a victim. The message I would like to convey is that there always is the possibility to choose the right thing and there never is an excuse for having done the wrong one.

MC: Italian cinema has a peculiar beauty, not only for photography. Behind there’s the love of those who make it.

Marta: I tried to approach a story that risked becoming too niche. The value of telling these stories that have social importance is to show, not wanting to teach anything but only wanting to communicate.

Communicating through entertainment and fun in a broad sense. The big challenge was to take an inherently political story and take it to the widest possible audience. Because it makes no sense to ‘preach to your own choir’.

MC: Marta, you are known for covering women’s issues in your films.

Marta: These are issues that burn inside me. Since I was a young girl I was interested in political issues. I was passionate about the stories of the last and the marginalised ones. These are issues that I deeply care about. I find it very stimulating to try to get them out of the political manifesto and try to make them usable and interesting for everyone. In the end, the mistake of politics is often to remain detached from everyday life and ordinary people.

We think of politics as something foreign and extra-terrestrial. We are the politics. What is happening in Iran is politics in action, it is history that is happening before our eyes. For me as a director and screenwriter it is interesting to find a key to tell these stories that burn me inside and that give me the courage to go on.

Also, during the London Film Festival, I had the opportunity to have a chat with Paolo Pierobon about his career between cinema, theatre and books. We also talked about her role in The Girl from Tomorrow.

MC: At the London Film Festival, I recently saw two new films in which you played very different priests. Was it easier to play the corrupt priest of The Girl from Tomorrow or the good priest of Esterno notte by Marco Bellocchio?

Paolo Pierobon: They are different approaches that depend on the temporal contexts in which you are inserted. 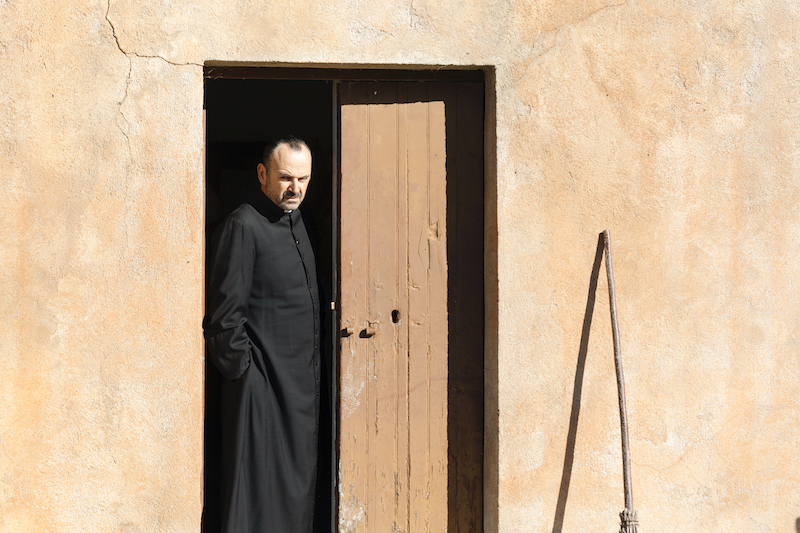 In Esterno notte we are talking about the terrorist climate of the 70s, the most important and most serious event of Italian politics from the post-war period onwards: the kidnapping and murder of politician Aldo Moro by the Red Brigades.

In THE GIRL FROM TOMORROW we talk about another historical fact, not as serious but very important, which is the first case of a woman who rebels against the ‘fuitina‘ (literally: “sudden escape”). In Sicily it was common practice for a young couple to elope in order to get married against the wishes of their families. That often became a kidnapping with violence and rape.

This provocative and daring film is inspired by a true story; set in 1965 it follows a young woman whose quest to avenge her rapist – who she would be expected to marry – changed Italian Law.

In hindsight, it’s like standing in front of the double side of a coin. On the one hand, the clergy acted in good faith, and on the other hand the corrupt clergy flirted with power completely forgot their vocation. So, it’s just engaging in a completely different way. I prefer imagination to identification.

The power of imagination allows us to be much freer to see the viewpoints on which to take a character. The identification must be there, but it forces your mental attention to many ‘stakes’. And you miss out on a lot of stuff. There is a risk of being a bit stubborn compared to being open to imagination.

Read these interviews in Complitaly in Italian here.

This entry was posted on Friday, January 20th, 2023 at 3:09 pm and is filed under Celebrity Interviews. You can follow any responses to this entry through the RSS 2.0 feed. You can skip to the end and leave a response. Pinging is currently not allowed.