Musician and presenter, Myleene Klass has combined two of her passions in her latest project as she unveils a brand-new album, My Lullabies: Motown. Going back to her classical roots and creating music with little ones in mind, the album is a charming collection of 13 tracks including Motown classics such as My Girl, I’ll be There and Endless Love, offering over half an hour of pure tranquillity. The album also sees Myleene recording with her own children for the first time, making this a truly special launch. 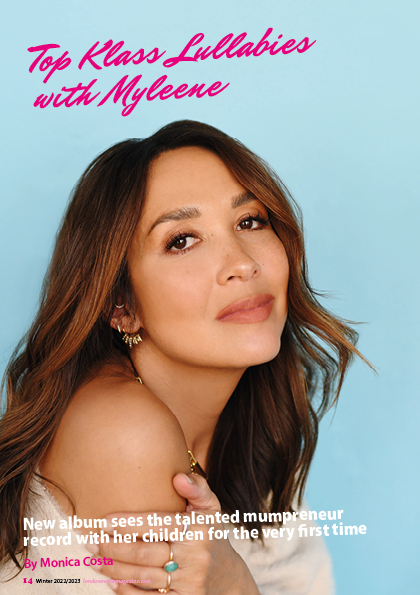 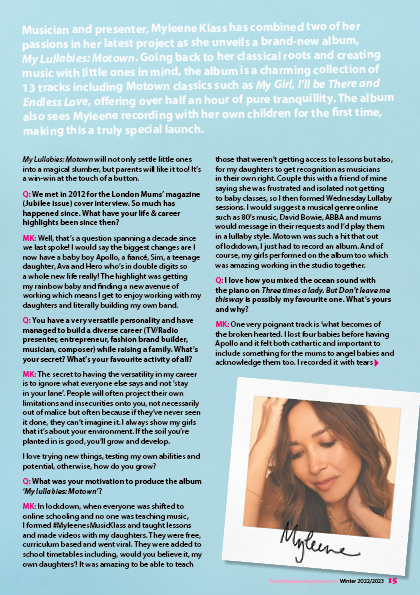 My Lullabies: Motown will not only settle little ones into a magical slumber, but parents will like it too! It’s a win-win at the touch of a button.

Q: We met in 2012 for the London Mums’ magazine (Jubilee issue) cover interview. So much has happened since.  What have your life & career highlights been since then?

MK: Life and career highlights since the 2012! Well that’s a question spanning a decade since we last spoke! I would say the biggest changes are I now have a baby boy Apollo, a fiancé, Sim, a teenage daughter, Ava and Hero who’s in double digits so a whole new life really! The highlight was getting my rainbow baby and finding a new avenue of working which means I get to enjoy working with my daughters and literally building my own band.

Q: You have a very versatile personality and have managed to build a diverse career (TV /Radio presenter, entrepreneur, fashion brand builder, musician, composer) while raising a family. What’s your secret? What’s your favourite activity of all?

MK: The secret to having the versatility in my career is to ignore what everyone else says and not ‘stay in your lane’. People will often project their own limitations and insecurities onto you not necessarily out of malice but often because if they’ve never seen it done, they can’t imagine it. I always show my girls that it’s about your environment. If the soil you’re planted in is good, you’ll grow and develop.

I love trying new things, testing my own abilities and potential, otherwise, how do you grow?

Q: What was your motivation to produce the album ‘My lullabies: Motown’?

MK: In lockdown, when everyone was shifted to online sc 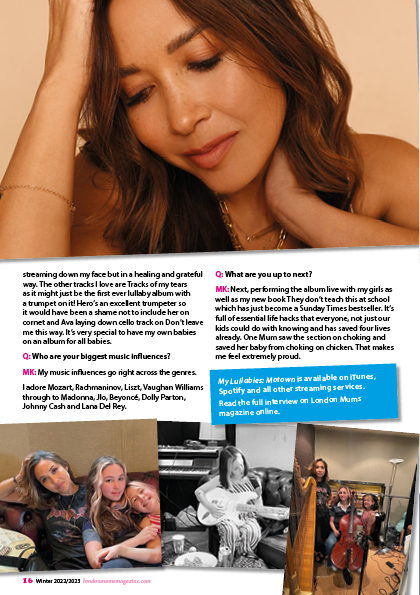 hooling and no one was teaching music, I formed #MyleenesMusicKlass and taught lessons and made videos with my daughters. They were free, curriculum based and went viral. They were added to school timetables including, would you believe it, my own daughters’! It was amazing to be able to teach those that weren’t getting access to lessons but also, for my daughters to get recognition as musicians in their own right. Couple this with a friend of mine saying she was frustrated and isolated not getting to baby classes so I then formed Wednesday Lullaby sessions. I would suggest a musical genre online such as 80’s music, David Bowie, ABBA and mums would message in their requests and I’d play them in a lullaby style. Motown was such a hit that out of lockdown, I just had to record an album. And of course, My girls performed on the album too which was amazing working in the studio together.

Q: I love how you mixed the ocean sound with the piano on Three times a lady. But Don’t leave me this way is possibly my favourite one. What’s yours and why?

MK: One very poignant track is ‘what becomes of the broken hearted. I lost four babies before having Apollo and it felt both cathartic and important to include something for the mums to angel babies and acknowledge them too. I recorded it with tears streaming down my face but in a healing and grateful way. The other tracks I love are Tracks of my tears as it might just be the first ever lullaby album with a trumpet on it! Hero’s an excellent trumpeter so it would have been a shame not to include her on cornet and Ava laying down cello track on Don’t leave me this way. It’s very special to have my own babies on an album for all babies.

Q: Who are your biggest music influences?

MK: My music influences go right across the genres.

MK: Next, performing the album live with my girls as well as my new book They don’t teach this at school which has just become a Sunday Times bestseller. It’s full of essential life hacks that everyone, not just our kids could do with knowing and has saved four lives already. One Mum saw the section on choking and saved her baby from choking on chicken. That makes me feel extremely proud.

My Lullabies: Motown is now readily available on iTunes, Spotify and all other streaming services.

This entry was posted on Thursday, November 10th, 2022 at 3:53 pm and is filed under Celebrity Interviews. You can follow any responses to this entry through the RSS 2.0 feed. Both comments and pings are currently closed.