Commuters on the Waterloo to Chessington South line were left bemused this Wednesday 21 March 2012, first day of Spring, by the appearance of four larger-than-life travel companions in their train carriage. 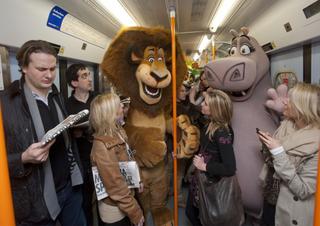 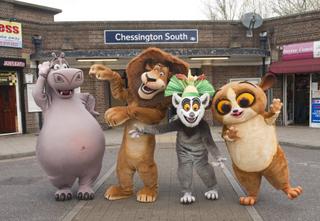 Madagascar stars Alex, King Julien, Gloria and Mort were spotted en route to Chessington World of Adventures Resort in Surrey, where they are due to appear in new live stage show, ‘DREAMWORKS MADAGASCAR LIVE! PREPARE TO PARTY’, which opens at the resort on 23 March 2012.

The new show, which is the only one of its kind in Europe, is launching as part of Chessington‘s 25th anniversary as a theme park.

Tags:  london attractions madagascar live
This entry was posted on Thursday, March 22nd, 2012 at 10:31 pm and is filed under Attractions, Blog. You can follow any responses to this entry through the RSS 2.0 feed. You can leave a response, or trackback from your own site.