You must be Hank Marvin! Why are the Seventies so in vogue?

As a marketeer, I am always fascinated by well produced or quirky advertisements. I have come across this one which is really peculiar and surely appeals to most parents in particular those who grew up in the Seventies (like me). 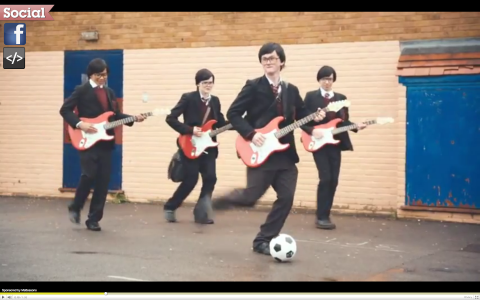 Personally I am a big fan of the era of Mad Men when advertising as we know it now was born. In this commercial the advertised products are not shown until the very last moment so it teases its audience and keeps them interested until the end.

The ‘You must be Hank Marvin!‘ advert is also socially minded and responsible towards children hence it has great appeal to us mums.

‘You must be Hank Marvin!‘ is a great example of a current trend in TV commercials that show a revival of the Sixties/Seventies merged with modern quirkiness and good music as the soundtrack.

Why are the Seventies so in vogue these days?

I was born in 1970 and I cannot remember those years as a grown-up but my mum and my aunties pointed that nowadays it feels like we’re going to have the Seventies all over again.

Economically speaking there are huge similarities and fashion-wise Seventies’ vintage clothes are very trendy now due to the popularity of TV series such as Mad Men, Pan Am and BBC the Hour.

Recently the BBC also featured several documentaries on the Seventies showing people’s lives then and comparing them to ours today. The tough economic climate made people rethink how to use products and recycle then and this is also happening now.

It’s my dream come true reliving the Seventies as a grown-up person! Maybe this will happen after all?! Do you feel the same?

Tags:  advertising mad men marketing Pan Am tv commercial
This entry was posted on Thursday, June 21st, 2012 at 8:48 pm and is filed under Blog. You can follow any responses to this entry through the RSS 2.0 feed. You can leave a response, or trackback from your own site.