Yogi Bear, one of our (as mums) favourite characters, is now back to be enjoyed by our children too. The new “Yogi Bear” movie has just been released in 3D Blu-Ray Pack, 2D Blu-ray Triple Play, DVD and Digital Download. The beauty of the movie is the fun combination of live action with computer animation. 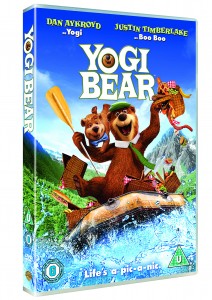 The film is funny and adventurous and includes educational environmental messages which the children will appreciate through the hilarious plot.

PLOT: When Yogi finds out that Jellystone Park is being sold, tossing him, Boo Boo, and all their friends out of the only home they’ve ever known, he and Boo Boo join forces with his long-suffering nemesis, Ranger Smith. They must find a way to save the park from closing forever! Dan Aykroyd (Ghostbusters, The Blues Brothers) stars as the voice of Yogi, Jellystone Park’s notorious troublemaker, and Justin Timberlake (The Social Network, Shrek The Third) is the voice of Boo Boo, Yogi’s faithful pal and co-conspirator in his never-ending schemes.

Directed by Eric Brevig, Yogi Bear features the voices of Dan Aykroyd, Justin Timberlake, and stars Anna Faris (Cloudy with a Chance of Meatballs, Alvin and the Chipmunks: The Squeakquel), Tom Cavanagh (TV’s Ed) in the film’s live-action cast.

This entry was posted on Friday, July 15th, 2011 at 9:38 pm and is filed under Blog. You can follow any responses to this entry through the RSS 2.0 feed. You can leave a response, or trackback from your own site.