World leaders, Celebrities and mums sign up to say ‘Healthworkers Count’, but more must be done, says Save the Children

Gathered at the end of the second day of the UN General Assembly in New York, Christy Turlington Burns, 50 Cent, Jennifer Connelly, Dikembe Mutombo, Yvonne Chaka Chaka, Alexis Bledel, and influential bloggers @Dooce and @Christinemosler signed up to Save the Children’s campaign to save children’s lives by investing in healthworkers around the world. The support marks ‘positive steps forward’ voices the charity, but is not yet enough to fill the gap of 3.5 million doctors, nurses and midwives around the world. 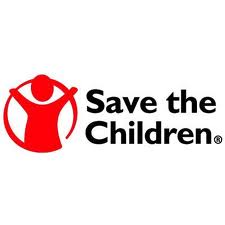 The charity engaged high profile actors, campaigners and social media ambassadors to raise awareness of the present day crisis with new statistics showing 350 m children never see a healthworker in their lives. The shortfall of doctors and nurses around the world means millions of children are dying from easily preventable diseases such as pneumonia and diarrhoea. Meanwhile, in the UK, a child will see a doctor or a nurse at least 10 times in the first five years of their lives. 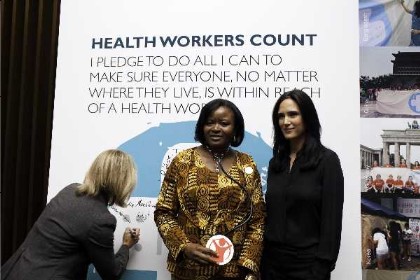 Attending Tuesday’s Every Woman Every Child UN Event, Beverley J. Oda, Canadian Minister of International Development, Dr. Raj Shah, Administrator of USAID, Dr. Tedros Adhanom Ghebreyesus, Ethiopian Minister of Health, and celebrities joined midwife Dr. Joan Shepherd from Sierra Leone in signing a giant plaster to indicate their support for Save the Children’s campaign to fill the global healthworker gap of 3.5 m around the world. The pledge reads: “I pledge to do all can to make sure everyone, no matter where they live, is within reach of a health worker.”

Christy Turlington Burns said: “Too many around the world do not have access to a healthworker. This is a universal issue we can all relate to and it’s something we have to change.”

Jasmine Whitbread, Save the Children International’s Chief Executive says: “The UN Secretary-General’s ‘Every Woman, Every Child’ initiative is spurring greater action on saving women and children’s lives – including investing in healthworkers. We saw positive new commitments from key countries and private sector organisations – commitments which, if kept, will mean that children who would have died, will now live. We also saw a greater emphasis on healthworkers and the critical role they play in curbing child and maternal mortality in the world’s poorest countries. As Ban Ki Moon said, frontline healthworkers are the unsung heroes and are in desperately short supply.”

Building the campaign for more healthworkers, inspirational mummy bloggers, championed by British blogger, @ChristineMosler, reached well over 3 million online with findings from the charity’s new report showing how effective a healthworker can be in stopping children from dying. A single healthworker can reach up to 5,000 children in one year with life saving treatment, and a country with enough doctors and nurses for all can increase a child’s chance of survival fivefold. Bangladesh and Nepal, both low income countries, are proof that progress is possible. Both have prioritised training health workers in local villages and communities; both have managed to reduce the number of children dying.

Whitbread continued: “Momentum has continued to build even in this difficult economic climate. However, it’s also clear that the progress today is not enough to tackle the 3.5 million shortfall in healthworkers globally – including 1 million frontline healthworkers. If we are to reach the Millennium Development Goals on child and maternal mortality, much more concerted action is needed from both developing countries and donors to tackle this crisis. “

Tags:  save the children
This entry was posted on Wednesday, September 21st, 2011 at 11:56 am and is filed under Blog. You can follow any responses to this entry through the RSS 2.0 feed. You can leave a response, or trackback from your own site.