Both the release of new movie Wadjda and this story haven’t been talked about very much in the media but that I think provide great food for thought and inspiration in the fight for women’s rights. The Cinema for Peace Foundation honored UN Women, the United Nations organization tasked to advance women’s empowerment and gender equality and its Goodwill Ambassador, Academy-Award winning actress Nicole Kidman, in Berlin tonight. Nicole Kidman received a special honorary award for her long-term social engagement for women’s rights together with UN Women Acting Head Lakshmi Puri. 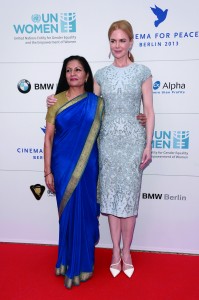 The high-profile advocacy evening at Soho House – among the main supporters were the leading German actresses Veronica Ferres, Martina Gedeck and Katja Riemann, human rights advocates such as the ambassador of the European Council, Bianca Jagger, and the Chief Prosecutor of the International Criminal Court, Fatou Bensouda.

In an evening where promoting the rights of women was the key leitmotif, Nicole Kidman said in her acceptance speech: “I have learned much about the horrific scope of violence against women around the world and seen its devastating impact. When I first learned that one in three women and girls experience violence in their lifetime, I was utterly shocked. Much of my work for UN Women has been since dedicated to this issue.”

Assistant Secretary-General and UN Women Acting Head Lakshmi Puri also received an honorary award. She expressed the need for strong partnerships for women’s empowerment and gender equality: “There is so much to do. Right now, we are looking to Egypt where UN Women has supported women since the early stages of the democratic transition.

At this crucial juncture, women must be part of a peaceful and democratic dialogue to determine the country’s future.” She added: ”In Syria, too, women must fully take part in the mediation and reconciliation process.” In their laudations, Veronica Ferres and Bianca Jagger strongly praised Nicole Kidman’s and UN Women’s engagement for the rights of women and underlined that there could still be done much more. “Investing in women is not just the right thing to do, it is also the smart thing to do”, Veronica Ferres stated. She was also deeply touched by the case of the Pakistani girl Malala who was brutally assaulted for claiming her right to go to school.

The Chief Prosecutor of the International Criminal Court, Fatou Bensouda, mentioned that women also often suffer heavily in wars. “It is incumbent upon all of us here today to work together to stop this scourge of sexual violence.” The described gender violence as an universal issue where everyone shares the duty to bring change to the world.

Nicole Kidman was appointed as UN Women Goodwill Ambassador to promote and protect women’s rights worldwide. She has also served as the international spokesperson for UN Women’s “Say NO – UNiTE to End Violence against Women” initiative. Say NO has been supported by Cinema for Peace in 2008, too, with Catherine Deneuve and others, while raising 100.000 US Dollar.

UN Women was established in 2010 to serve as a global champion to advance women’s empowerment and gender equality, dedicated to upholding the rights of women and girls worldwide. The organization is acting on the fundamental premise that every woman has the right to live a life free from violence, poverty, and discrimination, and that gender equality is central to achieving development.

Empowering women fuels thriving societies, spurring productivity and growth. Yet gender inequalities remain deeply entrenched in every society: Women lack access to land, credit and decent work and are paid less for equal work. They are too often denied education and health care. In political and economic decision-making women are disproportionately underrepresented. 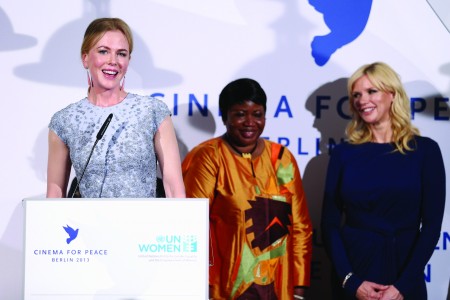 UN Women stands behind women’s equal participation in all aspects of life, but pursues a handful of elements proven to unlock rapid transformation, such as eliminating violence against women; supporting women’s participation and leadership, including in peace and security processes; and enhancing women’s economic empowerment. The organization works with UN Member States to set global standards for achieving gender equality, and then helps individual countries design laws, polices and services they need to implement these standards. UN Women also lends expertise to other UN agencies in advancing gender equality through their programs.

This entry was posted on Saturday, July 20th, 2013 at 1:00 pm and is filed under Blog. You can follow any responses to this entry through the RSS 2.0 feed. You can leave a response, or trackback from your own site.