This half term is “Prime Time” for Transformers thrills

Optimus Prime is back and bigger than ever before as he leads his Transformers in a new action packed battle against evil in the award winning series Transformers Prime: Darkness Rising, out on DVD from 22nd October 2012. 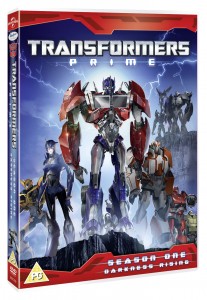 The DVD sees old favourites Optimus Prime and his heroic autobots like Bumblebee, Arcee, Ratchet and Bulkhead continue their battle of good over evil…the evil served up as only the dangerous Decepticons, led by Megatron, can.

Not only do the bio-mechanical aliens, who cleverly transform from enormous vehicles to giant robots, have to contend with their battle against the Decepticons they also have to guard over Jack, Miko and Raf – three normal kids who have stumbled across the existence of the Autobots and become unlikely allies.

In Season One while Megatron is missing, Starscream appoints himself as the new Decepticon leader. But things don’t go his way when Megatron is found barely alive and recovers to punish him. Throughout the series Jack, Miko, and Rafael develop closer bonds with the Autobots, and we meet new characters including the Autobot Wheeljack, the Decepticons Airachnid, Knock Out, and Breakdown, and the human terrorist organisation M.E.C.H., led by former US army colonel Leland ‘Silas’ Bishop. At the end of the season, the Autobots form an uneasy alliance with Megatron when Earth is threatened by the ancient and destructive being Unicron.

The DVD and features five episodes giving fans more than two hours of action and adventure as the Transformers face their most epic battle to date. What better way to transform the next half term than getting some prime Transformer time!

Transformers Prime:Darkness Rising DVD is available at all major retailers and also available for digital download and via video-on-demand on 22nd October 2012 – RRP DVD: £10.99.

This entry was posted on Monday, October 29th, 2012 at 3:05 pm and is filed under Blog. You can follow any responses to this entry through the RSS 2.0 feed. You can leave a response, or trackback from your own site.