Kermit the Frog and Miss Piggy joined co-stars Jason Segal and Amy Adams on the green carpet
at the World Premiere of The Muppets on Saturday 12th November 2011 in the US. 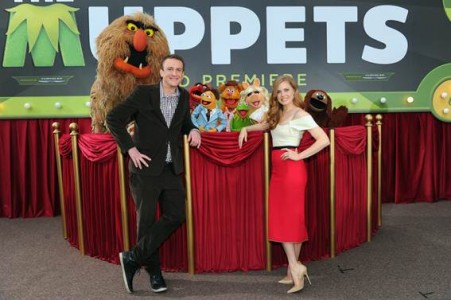 To stage a telethon and raise the $10 million needed to save the theater, Walter, Mary and Gary help Kermit reunite the Muppets, who have all gone their separate ways: Fozzie now performs with a Reno casino tribute band called the Moopets, Miss Piggy is a plus-size fashion editor at Vogue Paris, Animal is in a Santa Barbara clinic for anger management, and Gonzo is a high-powered plumbing magnate. With signature celebrity cameos, Disney’s “The Muppets” hits UK cinemas on February 10, 2012.

This entry was posted on Monday, November 14th, 2011 at 1:04 pm and is filed under Blog. You can follow any responses to this entry through the RSS 2.0 feed. You can leave a response, or trackback from your own site.