Are you spending too large a proportion of your wages on rent? And what are your thoughts on the private rental sector in London? Shelter research released yesterday has revealed the areas of London where soaring rents are eating up more than half of family wages. The news comes after Boris Johnson launched a public consultation asking Londoners to tell him how to improve the capital’s rental market. 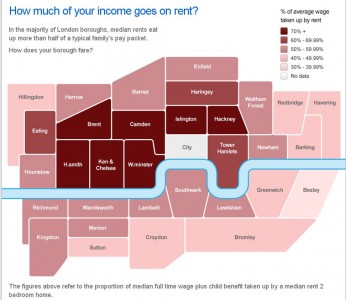 Government figures analysed by the housing and homelessness charity found that in 23 of London’s 32 boroughs, typical private rents take up more than 50% of family incomes, rising from 19 boroughs last year.

Across the capital, average rents take up 59% of family earnings.

A recent poll of Londoners commissioned by the charity revealed that almost half (49%) of London renters say that they receive poor or very poor value for money from renting from letting agents or private landlords in the capital.

Shelter is urging Londoners to add their voice to the public consultation launched by the Mayor into London’s rental market. Its campaign asks renters to answer four simple questions about their experiences of finding and paying for a rented home at http://lrs.homesforlondon.org.uk/tell-boris to make sure their voice is heard.

Londoners are among the unhappiest renters in the country, with a third (33%) of London renters worry about their contract being ended before they are able to move out, and 43% saying they don’t think of their rented house as a home.

Shelter’s analysis found that the most unaffordable boroughs to rent in London are:

Campbell Robb, chief executive of Shelter, said: “The news that renting in the capital is unaffordable isn’t a surprise to the families across London who are stuck in the rent trap, unable to save anything towards a home of their own because they’re paying out so much each month in rent.

“But the fact that rental costs in most areas of London are eating up more than half of family incomes should stop us in our tracks.

“Rising rents, the constant threat of eviction, and hidden fees are all par for the course in London’s frantic rental market.

“With a quarter of Londoners now renting their homes, it’s vital that they take this opportunity to make their voices heard. Boris Johnson has shown he’s listening to what renters have to say. This is our chance to re-design renting for a city which deserves a better deal.”

Tags:  london attractions london living rental in london
This entry was posted on Wednesday, January 9th, 2013 at 2:46 pm and is filed under Blog. You can follow any responses to this entry through the RSS 2.0 feed. You can leave a response, or trackback from your own site.