Mind Candy announces that it will be supporting BBC Children in Need this year; through a partnership with its children’s brand Moshi Monsters™ raising £100,000 via the Moshi Foundation and a limited edition collector’s tin. 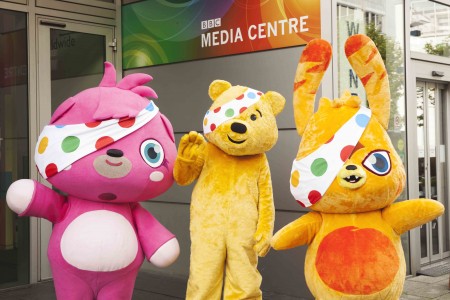 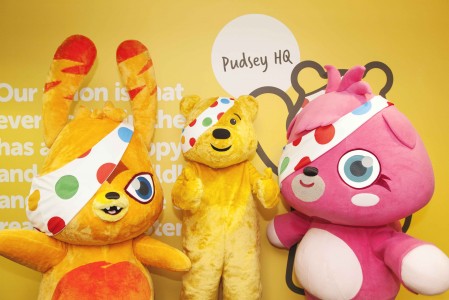 To help celebrate the partnership, popular characters from Moshi Monsters, Poppet and Katsuma, have visited Pudsey to be presented with the iconic multi-coloured spotty bandana for a photo-shoot at the home of BBC Children in Need – the Media Centre, White City.

The activity was kicked off earlier this month when Pudsey stopped by Moshi HQ for a special broadcast, which aired on CBBC’s Newsround. The BBC Children in Need Mascot was seen exploring Moshi HQ and was made available to be bought in game on MoshiMonsters.com, where players can purchase the famous bear with their in-game currency (Rox). Alongside this as part of the partnership, Mind Candy and Vivid Toy Group have created 30,000 limited edition Spotty Moshlings Collectors Tins, with £3 of each sale going direct to the charity fundraiser.

“BBC Children in Need does a fantastic job. Everyone here at Moshi Monsters is delighted to help them and hopefully we will continue to raise lots of money to support disadvantaged children and young people.” said Michael Acton Smith, Founder and CEO of Mind Candy.

Moshi Foundation is an independent charity set up in 2011 by Mind Candy Ltd. The Foundation is a grant giving organisation supporting the advancement of education, relief of financial hardship, sickness and poor health in children and young people anywhere in the world. It is run by a team of Trustees who review and assess all grant requests. It has previously supported a wide range of charities, including, Kids in Need Foundation, African Promise, Medical Detection Dogs, Mary’s Meals and Charity: Water.

BBC Children in Need’s vision is that every child in the UK has a safe, happy and secure childhood and the chance to reach their potential. We will realise this vision by supporting, promoting and publicising work that addresses the challenges that children and young people face and work that builds their skills and resilience. We are currently supporting c.2,700 projects that are working with children facing a range of disadvantages for example, poverty and deprivation; children who have been the victims of abuse or neglect or disabled young people. The BBC Children in Need 2013 Appeal show is on BBC One on Friday 15 November 2013.

This entry was posted on Thursday, October 24th, 2013 at 1:13 pm and is filed under Blog. You can follow any responses to this entry through the RSS 2.0 feed. You can leave a response, or trackback from your own site.