There has been a sea change in attitudes to pregnancy and early parenting over the past few decades, with parental behaviour shifting in most aspects: from dieting, discipline, breast feeding, returning to work and the role of the partner. These are the findings of a survey commissioned for Practical Parenting & Pregnancy Magazine, celebrating its 25th anniversary in its April 2012 issue. 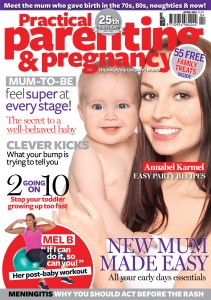 The comprehensive survey questioned over eight hundred women who became parents over the past few decades to look at how attitudes had changed. Some of the main findings were:

· The amount of time mums stick with breastfeeding has altered over the past few decades. In the 1970s 45% of mums breastfed for six months or more, this rocketed to 68% in the eighties, but had fallen back to 56% by the noughties.

However, it is not all change. The trusty buggy remains the nation’s most recommended piece of equipment through the decades, recommended by 23% of respondents in the 70s and 26% today.

According to Practical Parenting & Pregnancy editor Daniella Delaney: “It’s fascinating to see how pregnancy, birth and bringing up children have reflected the social changes in our society and changing health information. It’s incredibly encouraging to see mums-to-be cutting back on their pregnancy drinking and to see how much more involved fathers are. But clearly more work needs to be done to support mums with breastfeeding.”

In this month’s Practical Parenting & Pregnancy magazine there is a comparison between parenting 25 years ago and today, the secret to a well behaved baby and a guide to a happy pregnancy.

The online survey of 834 mothers across the UK, who are readers of Immediate Media Co magazines, took place in February 2012.

Tags:  parental advice parenting parenting skills
This entry was posted on Thursday, March 15th, 2012 at 9:43 pm and is filed under Blog, Parenting Skills. You can follow any responses to this entry through the RSS 2.0 feed. You can leave a response, or trackback from your own site.