No Gold Medals to the parking organisers at the Olympics! Parking in Olympic boroughs being eased by FREE online service

Let’s face it. As much as I want to stay positive about transport across London during the Olympics I am realistic and I know that we are facing eight weeks of total traffic and parking chaos across the Capital. It is inevitable because London will receive lots of tourists from all over the world and from the UK too. 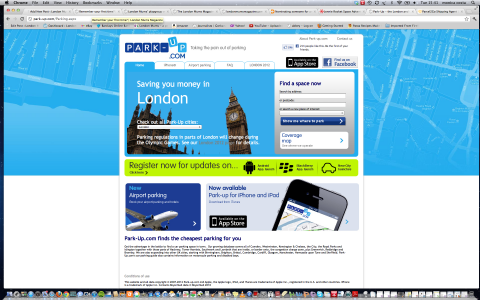 I don’t usually review apps but I have come across an excellent one that has just released by Park-Up.com which I absolutely love due to its simplicity and usefulness. You can leave your house and not worry about where you will be parking as you can check on the Park-Up.com website from your device or the APP at arrival.

For someone like me who often avoids driving not just because of the traffic itself but more importantly out of fear for not finding a parking space when arriving at destination, this app is the perfect solution. It has now removed my fear of driving in London. That’s why I love it. Most apps on iTunes are useless but this is the first and maybe the only one that solves real problems. Simply try it!

Park-Up.com‘s website is a searchable database of car parks and on-street parking in London and nine other UK cities. Car park coverage is nationwide and on-street information currently covers the whole of Central London, Manchester, Birmingham, Brighton, Bristol, Cardiff, Cambridge, Sheffield, Newcastle and Glasgow. The Park-Up.com website is FREE to consumers and iPhone app’s are available in the iTunes store from £2.99. For more information, please visit: www.park-up.com

This service and the app will come handy during the Games as there are new parking restrictions in the Olympic boroughs being introduced almost on a daily basis.

Ordinarily there are 36,000 public parking spaces available in Newham, Hackney, Tower Hamlets and Waltham Forest. However during the Olympics this will drop to less than 16,500 due to Olympic parking regulations.

London Organising Committee of the Olympic and Paralympic Games (LOCOG) Chair Seb Coe and his team have certainly done a great job organising the Games but have they done a similarly good job in warning motorists about the draconian local parking regulations enforced in the Olympic boroughs?

For many months rumours have been rife about the proposed parking regulation plans of the areas within the key Olympic London boroughs. With only a few weeks until the opening ceremony many councils are altering their plans almost daily. However, what has become clear is that the new regulations are going to have a dramatic effect on locals and visitors alike.

LOCOG new parking proposals aren’t easy to access or understand online, and for specifics citizens and visitors are expected to check with individual council websites.

Park-Up.com has now collated this information on its website.

Leading up to and during the Games the four key Olympic boroughs will become virtual “no-go parking zones”. Restrictions will run from early morning (times vary by borough) to late evening. Every street, even those without normal restrictions will be subject to new restrictions. Only residents and business permit holders have the right to park. Anybody wanting to park in these boroughs will require a permit from the relevant council and will have to purchase it in advance.

Park-Up.com has updated all on and off-street parking locations within the Olympic boroughs and elsewhere in central London on its website. This information is also available on its new iPhone app.

Tags:  exclusive Olympics jubilympic year london 2012 olympic games Olympic rings olympics
This entry was posted on Tuesday, July 10th, 2012 at 3:45 pm and is filed under Blog, Travel with kids. You can follow any responses to this entry through the RSS 2.0 feed. You can leave a response, or trackback from your own site.