A gorilla who was taken off the Pill on Valentine’s Day last year has given birth to a baby. 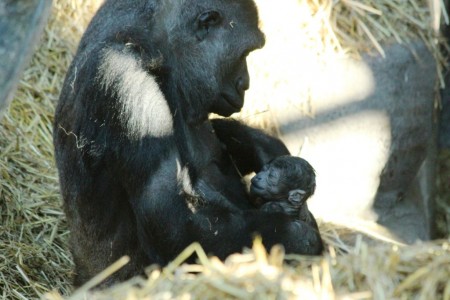 Mother Asili – one of the six female Western Lowland gorillas at Chessington World of Adventures Resort in Surrey – gave birth to the youngster yesterday (Thursday 23rd February), and both mother and baby appear to be doing well.

Animal keepers took Asili off the contraceptive Pill on February 14th 2011, in the hope that they could encourage some monkey business between Asili and partner Damisi. 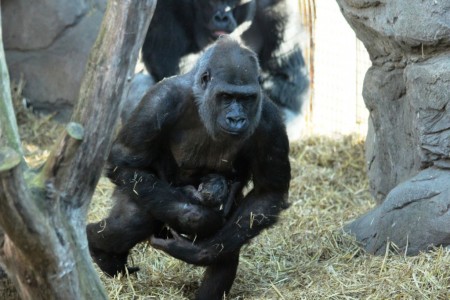 Some of the 27,000+ fans of the Chessington Facebook www.facebook.com/chessington page were able to witness the birth online and in real time, thanks to special webcams set up in the gorilla enclosure to stream live footage 24 hours a day. The birth took just 30 minutes, and saw mother Asili naturally deliver her baby, who has not yet been named, at 2.14pm. The sex of the baby may not be known for some time.

This is the second baby gorilla to be born at Chessington in the past three years, thanks to the Zoo’s successful breeding programme, reputed to be one of the best in Europe.

It is hoped that the new youngster will befriend young gorilla Mbula, who was born to mother Buu in March 2009. Both baby gorillas were fathered by breeding male Damisi. 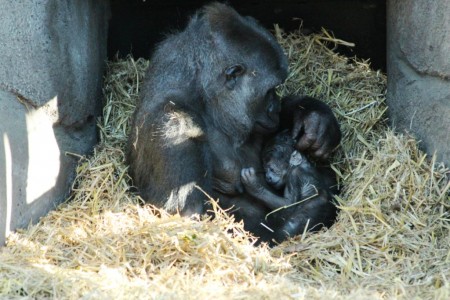 James Mackie, Gorilla Keeper at Chessington Zoo, said: “We’ve been waiting for what seems like forever for Asili to give birth, but it seems that – thanks to the unseasonably warm weather – spring has finally sprung.

“Damisi is turning out to be something of a stud in the gorilla enclosure. We introduced him as a new breeding male in 2008, and he immediately successfully bred with Buu. Now, only three years after the birth of Mbula, he has fathered a second baby following a romance with Asili.

“The Western Lowland gorilla is a vulnerable species which reproduces slowly”, he continued. “Females tend to produce only one baby every five years on average, so for Chessington to have welcomed two babies in three years really is cause for celebration. We’re expecting an influx of visitors keen to catch a glimpse of our new arrival when the resort opens for the new season on 23rd March.”

The new arrival is the ultimate birthday present for Chessington, which celebrates its 25th anniversary as a theme park this year.

Tags:  attractions baby gorilla free event for kids
This entry was posted on Monday, February 27th, 2012 at 2:05 pm and is filed under Attractions, Blog. You can follow any responses to this entry through the RSS 2.0 feed. You can leave a response, or trackback from your own site.