London girls to ‘walk the world’

SCHOOLGIRLS in London are set to take part in one of the biggest UK charity walks ever attempted.

Eight schools in the capital have so far signed-up to the World Wide Walk, covering routes across the country on International Day of the Girl, 11 October 2013. 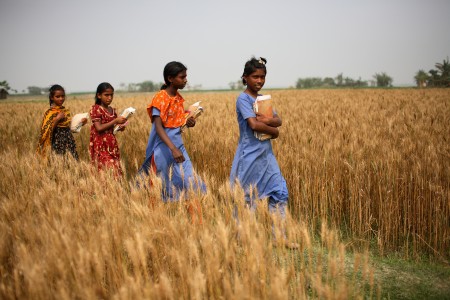 The walk will raise money to help educate some of the world’s poorest girls through global children’s charity Plan UK’s Because I am a Girl campaign.

“We’ll be walking in solidarity with the 66 million school-aged girls around the world who are missing out on an education,” says Plan UK’s chief executive Tanya Barron.

“Poverty, discrimination and child marriage are among the many barriers keeping millions out of school.

“Plan UK is using its campaign to make a positive, lasting difference to the lives of four million of the world’s poorest girls.”

The Girls’ School Association is partnering Plan UK for the day, with more than 30 schools already signed-up for synchronised walks across the country.

Joining schools across the country are North London Collegiate, Heathfield School for Girls, St Helen’s and Queensmead, all in North West London.

Each girl will walk 10km, adding up to more than 40,000km, equivalent to the circumference of the globe.

Organisers hope to raise £250,000 through sponsorship (£50 each) to help girls access quality education, healthcare and prevent abuse such as early and forced marriage.

“We’ll be walking side-by-side to raise awareness of and funds for some of the world’s poorest out-of-school girls,” says GSA President Hilary French.

“To walk the equivalent distance of the circumference of the globe is a massive undertaking but one we’re excited to be part of.

“We’re proud to be supporting Plan’s vital work and hope world leaders hear our message – that girls everywhere have the right to a quality education.”

Plan’s ‘Because I am a Girl’ campaign aims to support four million girls to get the education, choices and support they need to move themselves from a life of poverty, to a future with opportunity. To find out more visit: www.becauseiamgirl.org

Plan is a global children’s charity and works with children in the world’s poorest countries to help them build a better future. It was founded by British journalist John Langdon-Davies in 1937 to rescue orphans and other vulnerable children from the Spanish Civil War.

For more than 75 years the charity has been taking action and standing up for every child’s right to fulfill their potential by:

· giving children a healthy start in life, including access to safe drinking water

· securing the education of girls and boys

· working with communities to prepare for and survive disasters

· enabling families to earn a living and plan for their children’s future.

This entry was posted on Saturday, September 21st, 2013 at 9:00 am and is filed under Blog. You can follow any responses to this entry through the RSS 2.0 feed. You can leave a response, or trackback from your own site.