My son Diego, who is a big Lego fan, absolutely loves this tree! It must be the most original xmas tree ever! Visitors to St Pancras International in London are sure to stop in their tracks when they see the station’s epic Christmas Tree design for 2011. Revealed at the station today (Thursday 24 November), St Pancras International can guarantee there is no other Christmas tree like this one anywhere! It stands at 12.2 metres high and is made entirely out of LEGO bricks, the tallest tree ever to be made from LEGO. 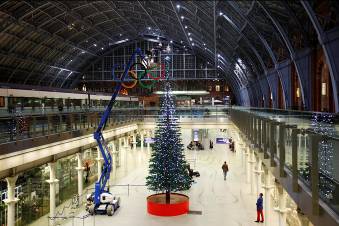 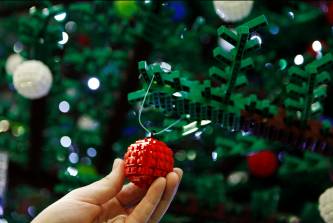 The giant LEGO tree is the centrepiece of a festive extravaganza at St Pancras International, featuring musical performances, a LEGO competition, theatrical showcases, retail promotions and much, much more. 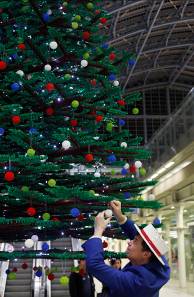 Located in the main Arcade area of the station, the imposing Christmas tree is made with 600,000 LEGO bricks and 172 LEGO branches. Of course, no Christmas tree is complete without Christmas baubles and LEGO sought the help of children from Edith Neville Primary School, Camden, and Copenhagen Primary School, Islington, as well as the Harpenden Explorer Scouts Unit to make the 1200 LEGO baubles that adorn the tree. 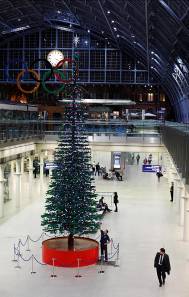 The LEGO Christmas tree was created by Duncan Titmarsh of Bright Bricks, who undoubtedly has one of the coolest jobs in the country, he is the UK’s only Certified LEGO Professional and there are only 13 in the world! Duncan has turned his passion for LEGO into a full time job and has built all sorts of weird and wonderful things out of LEGO over recent years. The St Pancras International LEGO Christmas Tree is his most ambitious project to date. 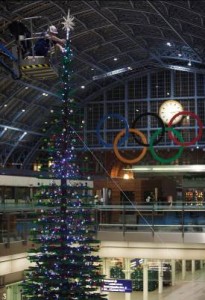 David Buxbaum, Marketing Director at LEGO comments: “The LEGO brand is all about play and creativity and Christmas is the time for celebration and fun. This magnificent Christmas tree is a shining example of these values and shows that with LEGO bricks you can let your imagination run wild and build anything.” 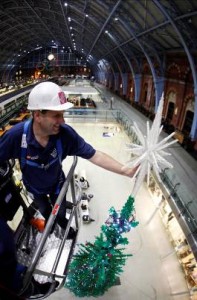 The LEGO Christmas tree will be at St Pancras International from 24th November until 3rd January 2012.

For further information on the LEGO Christmas Tree, visit
www.facebook.com/LEGO#!/LEGOGROUP

– The company name LEGO was conjured up by its founder Ole Kirk Christiansen from the Danish phrase leg godt, which means ‘play well’

– There are about 3,900 different elements in the LEGO range, comprising 58 different LEGO colours

– Approximately 23 billion LEGO elements are made every year in Billund – equivalent to 24 million every hour of 40,000 per minute

– If you laid all the LEGO bricks sold each year end to end, they would reach more than ten times round the world

This entry was posted on Thursday, November 24th, 2011 at 9:59 pm and is filed under Attractions, Blog. You can follow any responses to this entry through the RSS 2.0 feed. You can leave a response, or trackback from your own site.