Did you know that today is Rosh Hashanah, the Jewish New Year? I find Great Britain so fascinating as it celebrates so many New Years, Christmasses, Carnivals. The melting pot in our Capital is to be appreciated as it celebrates different cultures and religions. Rosh Hashanah is a two day celebration which begins on the first day of Tishrei, the seventh month of the Jewish calendar. The day is believed to be the anniversary of the creation of Adam and Eve, the first man and woman, and their first actions toward the realization of mankind’s role in God’s world. 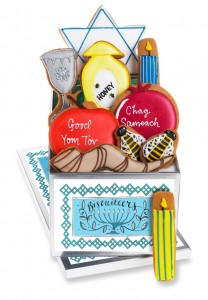 Rosh Hashanah customs include sounding the shofar (a hollowed-out ram’s horn) and eating symbolic foods such as apples dipped in honey to evoke a “sweet new year.”

The common greeting on Rosh Hashanah is “Shanah Tovah“, which, in Hebrew, means “have a good year”!

As in all best religious festivities, in the Jewish New Year there are yummy sweets to party with.

We have come across a special Rosh Hashanah biscuit tin by Biscuiteers containing all the classic symbols of the Jewish New Year: the star of David, a cup of wine, a pomegranate, a shofar, candles, an apple, along with buzzing bees and pot of honey.

This sweet tin is bound to usher in a happy new year.

The tin contains 16 biscuits and is priced at £38.50 plus p&p. These biscuits are made without any animal fat.

This entry was posted on Wednesday, September 4th, 2013 at 9:00 am and is filed under Blog. You can follow any responses to this entry through the RSS 2.0 feed. You can leave a response, or trackback from your own site.