How to go green: Top tips for a cheaper, greener home

With the Government Green Deal launched on 28 January 2013, now is the time to start thinking about home insulation and investing in future resources. The Green Deal offers households loans of up to £10,000 to support the instalment of these energy-saving home improvements which will help cut fuel costs in the long run. 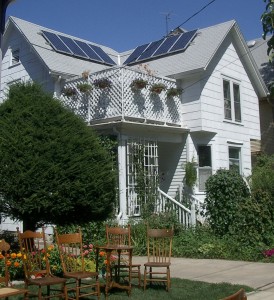 Household energy bills are set to be £600 higher each year in the coming decades if families continue to rely on gas, but only increase by £100 if the UK turns to renewable power generation. Eco- expert Tim Pullen believes it is important for homes to start cutting their energy consumption and in the process to becoming more sustainable.

Turn the heating down

You may not realise that the central heating is running at a higher temperature than it needs to. The room or radiator thermostat is usually on a wall and the centre of the room could be as much as 4 degrees warmer. The Energy Saving Trust has shown that each degree you turn it down will take up to 10 per cent off your heating bill. A 1 degree drop in temperature will have no appreciable impact on comfort, it just saves money.

The cheapest, easiest and most effective way to reduce your energy bill is to seal gaps around windows, doors, floorboards, skirting boards, loft hatches and pipes through walls. Fireplaces can make a huge difference. In a typical house 15 per cent of the heat is lost to draughts and if you have an unused fireplace with an open flue this figure can rise to over 65 per cent. Draught proofing the whole house will typically cost less than £200, and this could be recovered in the first year.

Ensuring your house is properly insulated will minimise heat loss. Both loft and cavity wall insulation is included in the Green Deal Scheme however bear in mind that 35 per cent of heat can be lost through walls but only 25 per cent through the roof. Houses built before 1920 are most likely to have solid walls and can still be insulated either internally or externally. Loft insulation should be 270mm of mineral or sheep’s wool or 140mm of rigid foam.

Double glazing is good, but replacement units are not always the answer. Secondary double glazing can come in at a tenth of the price and will be just as useful. Remember, we only lose 10 per cent of the heat through the windows so be budget aware.

As the proliferation of electrical equipment has increased, so has the amount of electricity used by the average household – a steady rate of 2 per cent per year since the 1960’s. Minimise electricity consumption by using things like low-energy lighting, power-down plugs and A-rated appliances.

Tim says: “We are often sold the big, expensive, sexy products but the most effective measures are often the smaller, cheaper, less interesting ideas.”

For more advice, visit The National Homebuilding & Renovating Show at the NEC Birmingham from 21 – 24 March 2013 and see The Eco Home Show.

Tags:  green home living green london living
This entry was posted on Monday, February 18th, 2013 at 9:00 am and is filed under Blog. You can follow any responses to this entry through the RSS 2.0 feed. You can leave a response, or trackback from your own site.