Families called on to help orphans in flood-stricken Thailand

Mums and dads in the UK are being urged to help orphans in flood-stricken Thailand by taking part in The Big Give online fundraiser from 10am on Monday 5 December 2011. 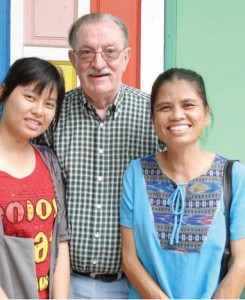 All donations made to Thai Children’s Trust – the largest UK charity helping disadvantaged Thai children – will be doubled by the Reed foundation – a charitable foundation set up by Sir Alec Reed of Reed Specialist Recruitment. They will be matching funds donated to Thai Children’s Trust and all other charities taking part in the Big Give, an online fundraising drive that lasts for one week from Monday 5 December, 10am.

The Trust aims to raise £50,000 in total to feed some 200 children at Sarnelli House, an HIV/Aids orphanage in Nong Khai, north east Thailand, every day for seven months.

This will go towards the purchase of arable farmland to grow rice, vegetables and raise livestock. In addition to providing a balanced diet, it will teach the children essential life skills in subsistence farming and animal husbandry and free up funds to pay for vital anti retroviral medications.

Donations made online will help poor families like Ying, 19, and her mother Fai. When Ying’s father died of Aids, they were ostracised from their community and forced to live in a small shack without running water or electricity. Fai was suffering from tuberculosis and could not afford to send her daughter to school.

Ying came to Sarnelli House when she was nine and was immediately started on a course of life-saving medication. Father Mike, who set up and runs Sarnelli House, organised for Fai to see a specialist and receive treatment for tuberculosis.

Ying is now in her final year of school and is doing extremely well and Fai has been helped to find work making handicrafts. Both have benefited immensely from the care they received at Sarnelli.

But now the country is dealing with the after-effects of the worst floods in living memory, and so the need for a sustainable source of food is becoming more urgent as supplies available at the local markets are erratic and prices high.

“In our 30 years of helping some 4,000 children across Thailand, we have rarely seen a greater need,” says Thai Children’s Trust Director, Andrew Scadding. “The focus is on a very poor part of the country where problems have been exacerbated by severe flooding. We do hope people will go online from 10am on Monday 5 December and give generously.”

To learn more about Sarnelli House and the Big Give, watch a short video and see how you can help at www.thaichildrenstrust.org.uk/thebiggive.

Thai Children’s Trust was founded over 30 years ago and is now the largest UK charity focusing solely on Thailand, supporting projects in Pattaya, Rayong, Nong Khai in the north, the Tsunami area in the south and Burmese refugees in the west of Thailand. Thai Children’s Trust helps children at risk, children with disabilities, children with HIV/Aids and refugee children, providing a home, an education and a future for some 4,000 children, and reaching out to thousands more through health and nutrition projects.

This entry was posted on Wednesday, November 30th, 2011 at 9:58 am and is filed under Blog. You can follow any responses to this entry through the RSS 2.0 feed. You can leave a response, or trackback from your own site.