Exclusive interview with comedian Vikki Stone on her 10,000+ hours of musical training & the secret British crushes

Vikki Stone is a multi-talented comedian, actress, singer and musician and winner of The Soho Theatre One Night Stand Up Award. Her unique mix of stand up and musical comedy has made her one of the fastest rising stars of British comedy. She performs regularly across the country at major clubs, festivals and theatres as well as appearing regularly on television.

I interviewed her during the Cadbury Crispello campaign for which she has performed funny songs and videos.
Cadbury Crispello have been encouraging the British public to share their cheeky little stories online and also asked women around the country to reveal their secret ‘funny man’ crushes and our very own Vikki Stone has made a cheeky little song about it. Erm… Phillip Schofield, apparently! Check some of the hilarious videos here:

Here is the full interview:

Q: What was your dream job when you were a child? 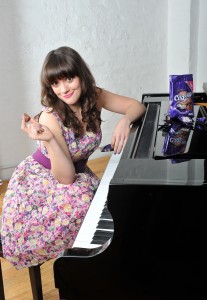 VS: I was a professional performer from the age of about 13, so I was very lucky in that I kind of got to do what I set out to do from very early on. I was never headed in an academic direction, so my mum really encouraged me to follow a career in performing.

What would you recommend to a child or parent who wants to learn a musical instrument, how would you promote enthusiasm for music?

VS: I was very lucky as managed to get a completely free scholarship to a specialist music school based on my talents, but I think the main reason that I did so well was because my mum was really insistent that I practised lots in order for me to be the best that I could be – she was great at coming up with various clever incentives to get me to practice. Like with anything that requires a lot of practice, you have to have discipline and you need a lot of discipline for music, I used to do 2 hours before and 2 hours after school every day Monday- Friday. Apparently they say that if you want to become an expert at something it takes 10,000 hours. I put in 4 hours a day, 5 days a week from the age of 11. 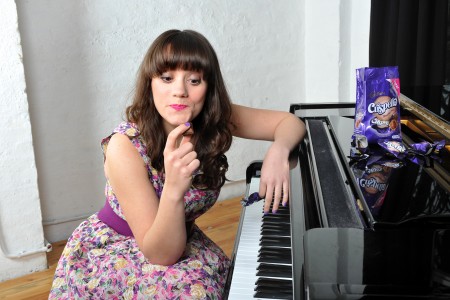 Q: What skills do you need to keep up with the slightly male dominated comedy field?

VS: I really just try and be as good as I can, and if it’s possible- the best. I try not to fixate about being a female comedian, I just try and do comedy and be funny. Comedy is generally funny whatever sex you are, there are much fewer female comedians out there than there are male ones so that may be why people tend to think there aren’t so many really great female comics.

Q: What are you up to next, after this campaign?

VS: Obviously the first thing that’s coming up are the ‘Crispello Gigs’ for the winners of the competition, which I’m really looking forward to. Then next Wednesday I’m at the Udderbelly festival on London’s Southbank, then I’m going to the Edinburgh Fringe festival and then finally I’m going on tour from September to November- So very busy over the next few months! 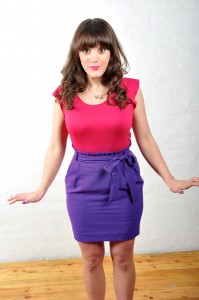 Q: If you were mayor of London for the day, what would you do to improve life in the capital?

VS: I would make the tubes run 24 hours, I just don’t understand why they don’t, it’s a really busy city and they need to make transport like tubes a 24hour thing. A lot of problems would probably be solved if the tubes ran all the time.

Q: Would you like to have kids one day?

VS: I currently have a dog so he is like my child for the time being. As a comic I’m very aware of how important timing is, and right now is not the right time for me. I work a lot so I wouldn’t be able to juggle my career with a baby at this moment.

As musically talented and exciting as she is funny, expect big laughs from this girl with a big voice.

Tags:  celebrity celebrity interview comedy
This entry was posted on Saturday, July 20th, 2013 at 9:00 am and is filed under Blog. You can follow any responses to this entry through the RSS 2.0 feed. You can leave a response, or trackback from your own site.