The Very Hungry Caterpillar by Eric Carle has come under attack for being too greedy. The award-winning authors of Mission:Explore have renamed the larval character as the Very Wasteful Caterpillar for leaving too many leftovers. 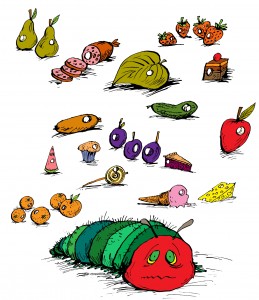 London author and parent Daniel Raven-Ellison explains why they are launching the attack. “The tale of the caterpillar munching its way through a fictional diet of a single sausage and fifteen other kinds of food is one of waste. Clearly Carle’s caterpillar is not aware of its environmental impact, but kids should think about this forgotten side of the story. One of the activities in our forthcoming book labels the caterpillar for being wasteful and challenges children to investigate how long it takes for different types of food to waste away”.

All going well, with over 300 other activities and recipes Mission:Explore Food will be hitting our shelves and digital devices this spring with a launch at the Hay Literary Festival. The authors are looking for help with crowd funding the book. Anyone can give as little as £1 and will receive rewards for their contributions including the opportunity to have themselves depicted in caricature in the missions. If the authors reach their target they promise to give a digital version of the book to every school in London and the UK (with a print on demand capability to reduce paper wastage).

“We’re making Mission:Explore Food to help kids and indeed many of their parents learn about growing, harvesting, cooking, eating, waste and soil. Too few children understand where food comes from and how to eat both healthily and ethically. This book will help children to discover food in playful ways while tackling these issues.”

Other missions in the book challenge children to grow and eat cress mazes, forage for food, identify endangered fish, make their own ketchup, get as far as they can on a banana, try and map taste to their tongue, investigate how their diet changes their poo and build soil zoos.

Controversy is not new for the guerrilla geographers at The Geography Collective who won a National Trust & Hay Festival Outdoors Book of the Year Award 2011 and were runners-up for Education Writer of the Year Award. In one of the Mission:Explore books they challenge children to find something unsustainable next to an illustration of BP’s Deepwater Horizon up in smoke and a pelican covered in oil. Unlike most children’s activity books the authors also audit their books to ensure girls and boys are equally represented, something that has earned them a rare Pink Stinks stamp of approval.

You can contribute to the crowd funding of Mission:Explore Food at http://bit.ly/MEfood.

Pleasefund.us is being used to raise the money needed to publish the book. If the full amount is raised contributors will receive a wide range of benefits including signed copies of the book or being illustrated into it. For a contribution they will also visit schools to give inspiring food workshops. The authors have promised to send a digital version Mission:Explore Food Taster, a PDF printable 150 page version of the book, to every school in the UK. This book will allow teachers to print and adapt mission activities for their classes for free. www.pleasefund.us/projects/missionexplore-food

Tags:  books books' reviews children's books' reviews social media magic
This entry was posted on Saturday, February 11th, 2012 at 1:37 pm and is filed under Blog, Books. You can follow any responses to this entry through the RSS 2.0 feed. You can leave a response, or trackback from your own site.