COULD QUEST TO BE ‘A PERFECT PARENT’ LEAD TO ‘POST CRADLE DEPRESSION’?

Research recently released by parenting website Yano.co.uk reveals that more than six out of ten parents say that the pressure to be the ‘perfect parent’ has made them feel low or depressed. 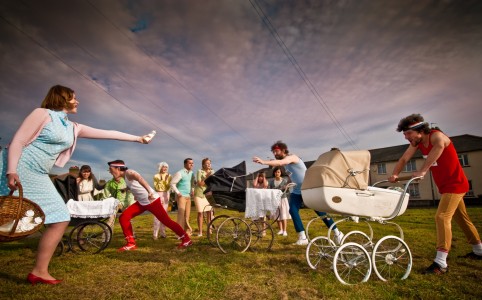 According to the study, more than six out of 10 mums and dads say the ‘pressure to be perfect’ has made them feel low or even depressed, with one in ten experiencing these feelings on a daily basis. The survey has lifted the lid on life for British parents, revealing that concerns about ‘the right way to parent’ are a huge burden on a majority of families in Britain today.

Dr. Penelope Leach, Psychologist and parenting expert comments: “The roles we women are expected to fill – mother, partner, worker, daughter, sister – are an overload for almost everyone. One mum told me her life was like being on a tightrope: gloriously exciting when all went well and completely disastrous if the least thing went wrong. A child being ill or a childminder taking a day off was enough to bring her whole life crashing down.”

Parenting expert Liz Fraser says, ‘The competitive parenting thing is so destructive. It’s strange that a subject that should be so bonding and human and one for which the sisterhood should really pull together, can be so hurtful too. I have wonderful mum friends who I go to, to talk about parenting. You need good friends who can laugh and say “this is a bit of a nightmare isn’t it?” If someone is pushy and competitive I say you don’t need them in your life.’

Whilst mothers perhaps unsurprisingly tend to worry the most, fathers were not far behind with 50% admitting to feeling low or depressed about not being ‘the perfect parent’. Worry about the issue was greatest in the South West (70%) but lowest in Scotland (20%). However, despite this, it is the Scots who are the most likely to compare their parenting styles to others (over 75%).

46% of parents admit to buying their children gifts such as toys and clothes to make themselves feel that they are doing a good job. A further 38% say they pay for expensive activities or extra tuition or sports coaching in their quest to be the ‘perfect’ parent.

Tags:  parental advice parenting parenting skills
This entry was posted on Friday, May 25th, 2012 at 2:02 pm and is filed under Blog, Parenting Skills. You can follow any responses to this entry through the RSS 2.0 feed. You can leave a response, or trackback from your own site.