From Saturday 11th February 2012, the Science Museum is to display the Chilean rescue capsule – Fénix 2. So exciting, thinking at the incredible story we all watched on TV only a couple of years ago. 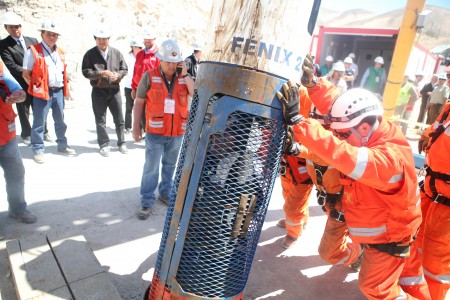 The capsule was specially built to rescue 33 miners who were trapped underground at the San José mine, Chile in October 2010. The 3.9m capsule is made of steel and measures 54cm wide. All of the men were rescued from the mine 700m below after being trapped for 69 days – surviving longer underground than anyone on record.

Katrina Nilsson, Contemporary Science Manager, Science Museum, said; “We’re honored to display the Chilean rescue capsule at the Science Museum – it’s an icon of the unprecedented rescue mission of the 33 miners. I’m sure we can all remember the moment when the first miner was pulled to the surface after being trapped for almost ten weeks. By showing the capsule at the museum, we hope to draw attention to the technical and engineering challenges that the rescue team tackled during this extraordinary operation.”

The capsule was fitted with enough oxygen-enriched air to last the 20 minute journey to the surface, as well as communication equipment and retractable wheels to help it run smoothly up and down the mine shaft. It weighs 460kg, is painted red, white and blue (Chilean flag colours) and is fitted with an emergency release mechanism so if the capsule got stuck, the miners could winch back down into the mine. It was designed by the Chilean Navy and built by Chilean Navy engineers. 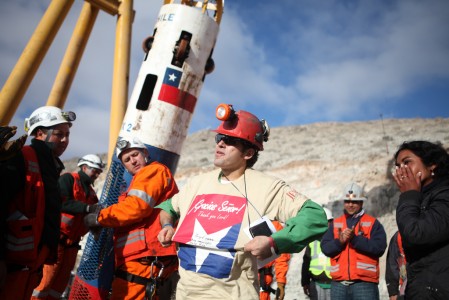 The capsule will be on show at the Science Museum until 13th May 2012. The display highlights the extraordinary technical challenge of the rescue, which involved hundreds of engineers, technicians and scientists.

During February half term (14-16th February), the Science Museum will also have a rescue robot on display, as part of a Search & Rescue event.

Designed by Warwick Mobile Robotics, the robot can overcome challenging terrains, look for victims and produce a map of the environment. Nicknamed ‘Pinky’, the robot is remote controlled and has two pairs of flippers enabling it to climb over stairs, ramps and uneven terrain. Equipped with a gripper and a head on a robotic arm, Pinky has a multitude of sensors for search and navigation.

The Warwick Mobile Robotics team will be on-hand to demonstrate the robot’s skills, answer questions and lead discussion on the future of rescue robotics.

Science Museum’s inventor in residence, Mark Champkins, explains his ‘Black Hole Light’: “I rather liked the idea of uniting the technology that led to the discovery of sub-atomic particles, and in turn, to the birth of quantum physics (in the form of a Geissler-inspired neon tube) with a form that is representative of the path light would take spiralling into a black hole. Mixing Cosmology with Quantum Physics, I’ve tried to reconcile them in one artefact. It’s something of a metaphor for his work, especially his identification of Hawking Radiation and I hope it can also serve a practical purpose in his home or office.”

The Science Museum’s collections form an enduring record of scientific, technological and medical change from the past. Aiming to be the best place in the world for people to enjoy science, the Science Museum makes sense of the science that shapes our lives, sparking curiosity, releasing creativity and changing the future by engaging people of all generations and backgrounds in science, engineering, medicine, technology, design and enterprise.

Tags:  free event for kids free london freebies science science museum social media magic
This entry was posted on Wednesday, February 8th, 2012 at 10:36 am and is filed under Attractions, Blog, Central London, Great Indoors. You can follow any responses to this entry through the RSS 2.0 feed. You can leave a response, or trackback from your own site.