Children’s bedrooms house £1,200 worth of toys

Though many families are feeling the pinch, new research has revealed that the average 3-10 year old’s bedroom is filled with a whopping £1,200 worth of toys – almost five times the value of toys parents had when they were youngsters. 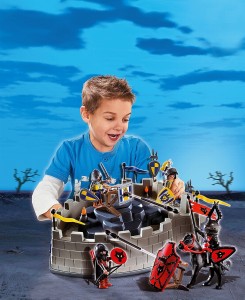 According to the poll of 1,000 UK parents of children aged between 3 and 10 years of age commissioned by Playmobil and conducted in November 2012 by OnePoll, one of the driving forces behind the steep increase in the value of children’s toy chests is the popularity of expensive tech and gadgets designed for children. Over 30% of parents surveyed admitted their child owns a games console, whilst one in seven aged under ten owns a tablet.

With the lure of electronic toys becoming increasingly harder to resist, parents are struggling to find the perfect present for children and strike a balance between tech and tradition. Almost a third of the mums questioned said their child’s favourite toy doesn’t require batteries, and the toys their child loves to play with the most are classics such as cuddly toys, bikes and play sets.

Commenting on the research, Mirella Cestaro, Editor of Toys n Playthings Magazine said: “It’s a parent’s worst nightmare to give a child a Christmas present that they get bored of within hours. Every toy has its place, right from the latest gadget and gizmo to traditional knights, pirates and princess play sets. The key is to shop smart and choose a toy that will allow children to develop and, most importantly, provide hours of fun.”

Tags:  Christmas Christmas gift guide
This entry was posted on Monday, December 10th, 2012 at 12:56 pm and is filed under Blog, Parenting Skills. You can follow any responses to this entry through the RSS 2.0 feed. You can leave a response, or trackback from your own site.