The findings emerged in a poll of 2,000 people, and shows that despite being in a committed relationship, couples are spending just TWO PER CENT of a normal day enjoying each other’s company.

Indeed, three in 10 people believe their relationship is suffering because they don’t see their other half enough. 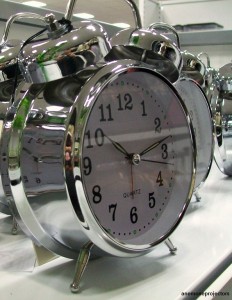 A resounding 89 per cent reckon they would get on far better if they indulged in more quality time – and half of people would simply be happy with a nice meal together at home, with the chance to catch up on the events of the day over a simple bite to eat.

But factors such as the household chores, work, the children and even the television prevent couples from communicating regularly.

A spokesman for www.eatwelshlamb.co.uk, which conducted the study, said: “Quality time for many people simply means time alone their partner to relax – without the stresses and strains of everyday life, interruptions or the chores.

“Incredibly, 16 per cent of people polled say they don’t get any quality time together at all – which means they don’t chill out on the sofa, rarely eat dinner together or go out and have fun away from the home.

“We would encourage couples to make more time for each other, scheduling in a few minutes each day to cook a quick and easy meal which they will actually eat together, or if this isn’t possible, just make sure there is enough time at the end of the day for a meaningful conversation.”

The study shows six in 10 couples would simply welcome the opportunity each day to talk to their partner and find out if they are okay or not.

Ideally, couples would like to have at least one hour and 25 minutes alone together daily, that’s just under 10 hours a week.

Two thirds of those polled say they would relish the chance to spend time enjoying each other’s company, and 50 per cent say quality time for them is just cuddling up on the sofa together.

Other ways people would like to spend their quality time include watching a film together (50 per cent), doing something new together (42 per cent), or doing everyday tasks together such as the shopping (29 per cent).

If given the choice, couples would like to have dinner together more often, take country walks, visit the pub or the cinema, watch stand-up comedians and go to the beach.

But 49 per cent of disgruntled people say their partner doesn’t even make romantic gestures anymore, instead taking them for granted or being too busy.

Unfortunately for many couples, dinner is only eaten together four times a week, and for 15 per cent, cuddling up on the sofa at the end of the day is the only time they get in each other’s company.

A third of those polled acknowledged that once the working day is over, and the children are in bed, they probably spend far too much time finishing off the household chores.

But 54 per cent wish they could spend less time cooking and cleaning and more time with their partner.

The spokesman for Welsh Lamb continues: “This survey shows people have a fair idea of how they would spend their time together given the choice.

“And rather than opting for extravagant romantic occasions such as dinner out, trips to the theatre and big night’s on the town, the majority of those polled would be happier within simpler options in the home – such as eating together or watching the television.

“In some households things really have hit rock bottom, as more than a third of couples admit they even consider doing DIY as quality time – believing that if they are working on something together, whatever it is, it counts.”

This entry was posted on Wednesday, November 30th, 2011 at 10:36 am and is filed under Blog. You can follow any responses to this entry through the RSS 2.0 feed. You can leave a response, or trackback from your own site.