The Thames Diamond Jubilee Pageant: all you need to know to be in the right place

Lots of people have asked me recently if I know where the Pageant is starting from, where it goes etc etc. Then I researched and I found this amazing iPad app that will help getting people to the right places at the right time during the Pageant journey. 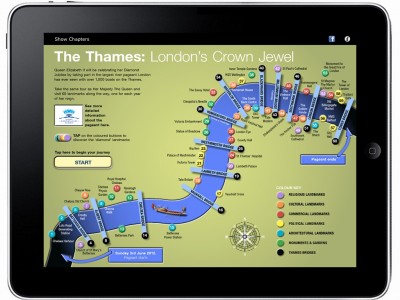 The great thing is that this is the only official Thames Diamond Jubilee Pageant iPad App with the approval from the Queen. So it is official information and proceeds will go to charity.

The app is educational and allows users to follow the official
route of the pageant, which is taking place on Sunday
3rd June 2012. Starting upriver of Battersea Bridge,
finishing downriver of Tower Bridge, and taking in 60
landmarks along the way, The Thames: London’s
Crown Jewel takes users on an interactive multi-media
journey along London’s widest, longest, and most
famous “street”.

Taking in contemporary buildings, historical landmarks
and modern architecture along the route and ending
with the iconic 126 year old Tower Bridge, the App
navigates the river and its historic surroundings. 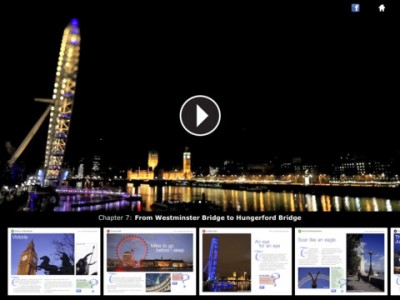 With an
interactive map and visual table of contents, over 90
stunning full screen images, music and audio clips, and beautiful time-lapse videos that bring the river to life, this
really is an engaging experience for all ages.

With content including stunning photography from Putney-based photographer, Ricky Leaver, poetry from the likes of
Shakespeare and Wordsworth read by Fulham residents, and music from the London Philharmonic Orchestra, the
App is a truly London affair.

Launching the iPad App, Phil Smith of the Thames Diamond Jubilee Foundation said: “All eyes will be on London on 3rd
June 3rd for what promises to be the most exciting river pageant of modern times with over 1,000 vessels including
the Royal party on the Thames. By downloading the App, people all over the world will be able to navigate the same
journey – while they watch on television or listen on the radio – clicking on famous landmarks as they go, and joining in
the day of celebration.”

River Art Productions will donate 50% of the profits from the App to the Thames Diamond Jubilee Foundation.

The Foundation is a privately funded charitable trust which aims to raise funds for charitable projects that have a link
to The Queen and her Diamond Jubilee, with a particular focus on areas such as the Commonwealth, youth and
education, as well as supporting the wider charitable sector.

Founder of River Art Productions and Thames enthusiast, Seymour Banks, has worked with local businesses and
individuals to create this unique digital memento of the Diamond Jubilee: “The Thames: London’s Crown Jewel, was
born out of a lifelong love for the river Thames and a desire to create a lasting legacy for the Queen’s Diamond
Jubilee. In the spirit of Roald Dahl, our ambition was to create an App, which is as fun as it is inspiring for both
children and adults alike.”

Sally Down, Creative Director of River Art Productions says: “The App is fun, entertaining and educational. We have
created something that people of all ages and from all over the world can enjoy on the day and after the event.
Whether you’re a Londoner wanting to know some interesting facts about your own city, or a viewer from afar, the App
showcases the Thames at its best – a true Crown Jewel for one of the world’s leading cities. We are delighted to be a
part of this world-class spectacle.”

With approximately 55 million iPads sold to date, River Art Productions are confident that royal watchers from Putney
to Perth and beyond will be able to join the Pageant from the comfort of their own armchairs.

Fun facts found in the iPad App include:

– 1685 saw the first Italian opera ever performed in
England, hosted by the wife of Charles II, Catherine of
Braganza, at Somerset House.

The Thames: London’s Crown Jewel iPad app is available for download from the iTunes App Store for £1.99.

Tags:  Diamond jubilee Jubilee jubilympic year london 2012 party tips street party The Thames Diamond Jubilee Pageant
This entry was posted on Thursday, May 24th, 2012 at 2:58 pm and is filed under Activities, Blog, Party tips. You can follow any responses to this entry through the RSS 2.0 feed. You can leave a response, or trackback from your own site.