London Mums magazine reporters were invited to Kew Gardens on Saturday 23rd of July 2022 to watch an outdoor theatre production of Sixteen Feet’s The Jungle Book for families.

This warm and engaging production which follows Mowgli’s adventures following her separation from her family is a delight for younger audiences particularly and the peaceful setting of Kew Gardens is an inspired setting in which it’s easy to imagine that you’re sitting in the jungle itself. 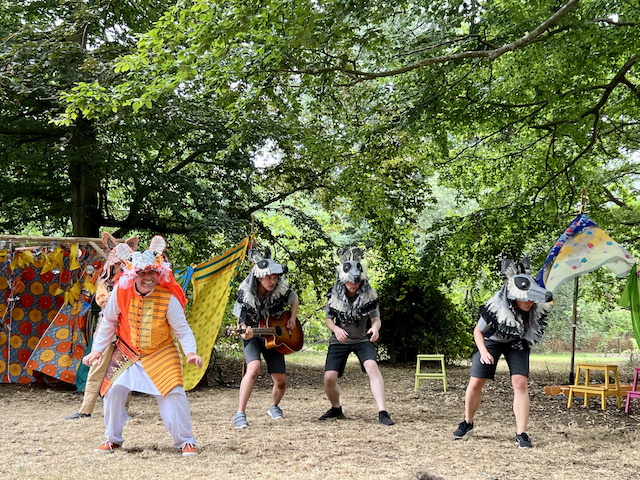 The engaging cast make imaginative use of the trees, foliage and the audience as props and move freely among them all; wolves appear unexpectedly from behind trees, Kaa the python slithers silently through a fascinated group of young children, and the endlessly energetic Baloo encourages participation from the audience throughout. The overall effect is that the play becomes something the audience is both viewing and participating in and the effect is more charming than not. The musical accompaniments, courtesy of Guy Holden, are of sufficient duration and frequency to set and establish the mood without overwhelming the intimacy which the play produces and the actors demonstrate admirable skill on instruments ranging from accordion to trumpet.

The dark themes of fostering and abandonment which characterise the story are, correctly, acknowledged without being addressed in this light hearted production and ultimately it becomes difficult to even dislike Shere Khan whose claim to his prey is engagingly persuasive, at least up to the point where realisation of what the successful claim would entail, while it’s positively impossible to rail against Tabaqui the obedient jackal, whose endearing sycophantic devotion to her malevolent oppressor invite a response to assist rather than despise.

In this production, Baloo dominates as central character but the show stopper role undoubtedly belongs to Kaa whose softly spoken presence, and intelligent use of sibilants, make her the longer lasting memory in children when the last ebullient boom of Baloo has echoed its last among the appropriated area of Kew Gardens.

There are no messages, winks to the adults, or deeper meanings to this production. It’s honest entertainment and certain to be enjoyed by adults and children alike.

Tags:  #baloo #kaa #kewgardens #sixteenfeets #thejunglebook
This entry was posted on Tuesday, August 2nd, 2022 at 9:00 am and is filed under Great Outdoors. You can follow any responses to this entry through the RSS 2.0 feed. Both comments and pings are currently closed.