After two years of being forced to give up live music, we all seem to be suffering from FOMO (fear of missing out) now. Summer of 2022 will be remembered for the biggest music festival in London of all time.
London’s festival is back for THE celebration of the summer. After two years away, American Express® presents BST Hyde Park returns for the 8th edition for more unique shows and unforgettable music moments, and a huge and eagerly awaited celebration for the nation. The festival has been at the centre of London’s summer since 2013, and London Mums magazine has been covering this festival since the very beginning. BST Hyde Park has brought the world’s biggest artists to the greatest outdoor venue in the world over consecutive weekends with a host of free family-friendly activities and entertainment during their midweek programme, Open House. 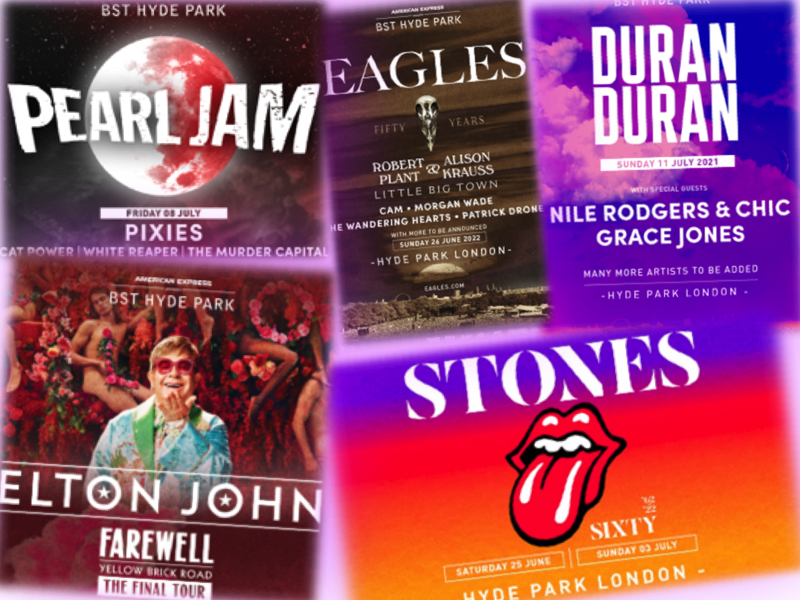 This year BST Hyde Park is returning bigger and better than ever. The line up is extraordinary: Elton John (24 June), The Rolling Stones (25th June and 3rd July), The Eagles (26 June), Adele (1-2 July), Pearl Jam (8-9 July), Duran Duran (10 July).
For us parents these acts are absolutely perfect as they feed our insatiable palate for oldies. But BST is also a great family festival too, and an opportunity to take our children to the best live music and share our love for good songs and vibes. 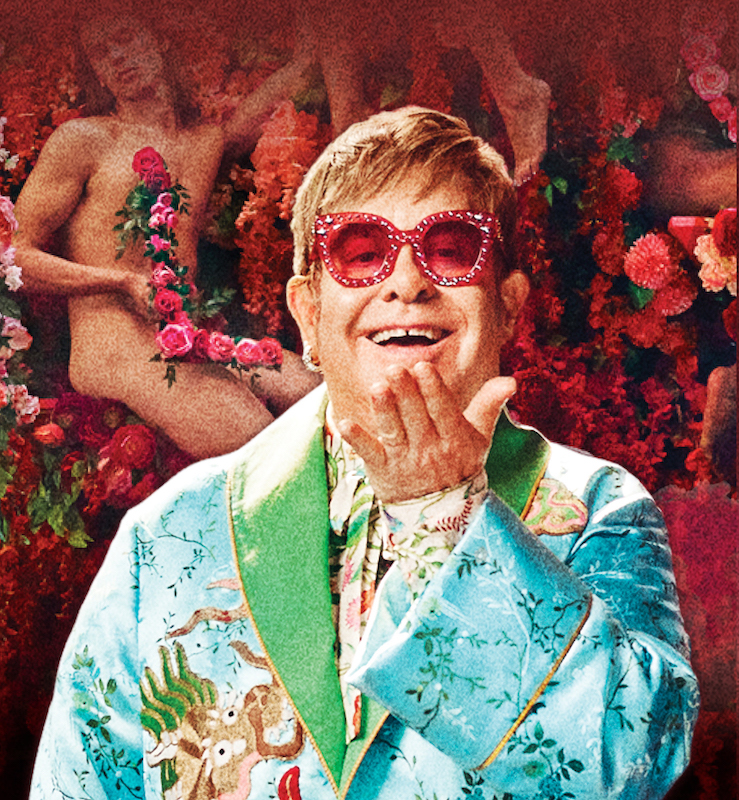 Elton John will open the celebrations with his ‘Farewell Yellow Brick Road – The Final Tour’ on Friday 24 June, 2022 followed by the Rolling Stones on Saturday 25th June and the Eagles who will conclude the first weekend.

Tickets to Elton John’s ‘Farewell Yellow Brick Road’ show at BST Hyde Park are completely sold out.
Elton John’s list of accomplishments are unsurpassed in their breadth and longevity. Encompassing 5 continents, and over 350 dates, this 5-year-long Farewell Yellow Brick Road tour will end in 2023 and marks his retirement from touring after more than 50 years on the road. In 2019 it was named Billboard’s Top Rock Tour and Pollstar’s Major Tour Of The Year. In the UK, he has scored 7 Number 1 Albums, and 7 Number 1 Singles (and 31 UK top 10s). Elton is one of the top-selling solo artists of all time, with 1 diamond, 40 platinum or multi-platinum, and 24 gold albums, over 50 Top 40 hits, and he has sold more than 300 million records worldwide. ‘The Lockdown Sessions’, an album of collaborations recorded during the COVID-19 Pandemic, was released in October 2021 and went straight to number 1 in the UK album Charts, becoming Elton’s 8th UK number 1 album in the process. Its lead single “Cold Heart (PNAU Remix) with Dua Lipa” became a bona fide global hit, reaching number 1 in the UK and Australian singles charts. Its success meant that Elton became the first ever solo artist to score a UK Top 10 hit single in 6 consecutive decades. In America, he holds the record for longest span between Billboard top 40 hits at 50 years.

2019 also saw the release of ‘Rocketman’ and global bestselling autobiography, ‘ME’. An epic fantasy musical motion picture of Elton’s life, ‘Rocketman’ has been a commercial and critical hit, taking close to $200m at the box office, winning Elton his second Oscar in the process. 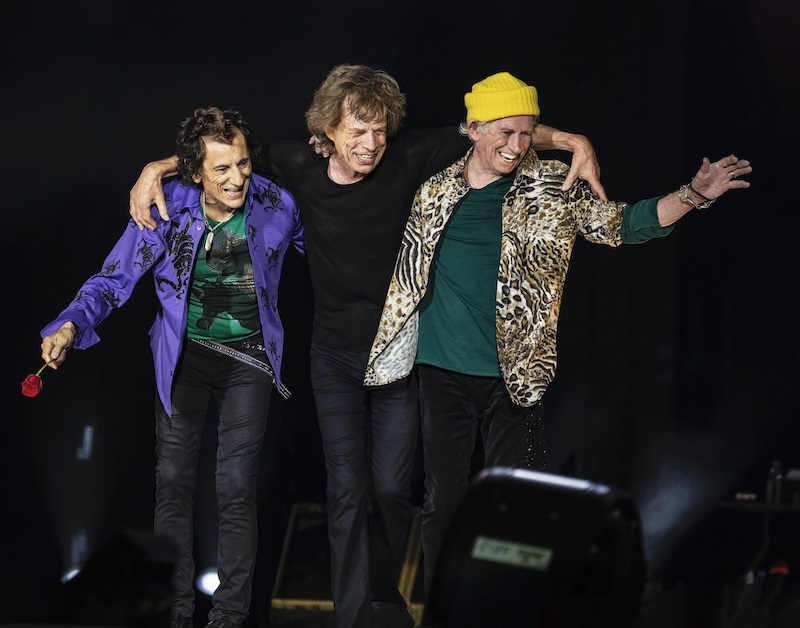 The Rolling Stones will perform on two nights (25th June and 3rd July) and will celebrate their 60th Anniversary. In fact, they return 60 years on from their first ever show at the legendary Marquee Club in London. Mick Jagger, Keith Richards and Ronnie Wood return to the Great Oak Stage this summer, once again joined by Steve Jordan on the drums, who will replace Charlie Watts who sadly passed last summer.

Fans of The Stones will be treated to a set list packed full of classics such as ‘Satisfaction’, ‘Paint It Black’, ‘Tumbling Dice’, ‘Sympathy for the Devil’ and ‘Gimme Shelter’ but each night at Hyde Park they will include surprises from half a century’s worth of their classic hits. As always, when the Rolling Stones come to town, they bring an incredible production and state of the art stage design.

The Rolling Stones and Hyde Park have a rich history to say the least. Their 1969 show Stones in the Park is one of the most famous concerts of all time. The concert was a magical moment in history, though the true number was never known, between 250,000 and half a million people came to see the band return to where they truly belong, back on the live stage.

They then returned just once in 2013 to open BST Hyde Park where they played two sold-out shows to 130,000 fans, resulting in an award-winning concert film ‘Sweet Summer Sun: Hyde Park Live’, directed by Paul Dugdale. This show kick-started a long line of once in a lifetime moments at the festival, including iconic performances from Celine Dion, Stevie Wonder, Tom Petty, Barbra Streisand, Carole King, Bon Jovi, Kylie Minogue, The Who, Blur, Kendrick Lamar and so many more. There is no doubt that this year’s Stones show will go down in history as well.

All the iconic bands of my youth are performing in London this summer and while listening to their music this week I feel tearful at the idea to see them live. 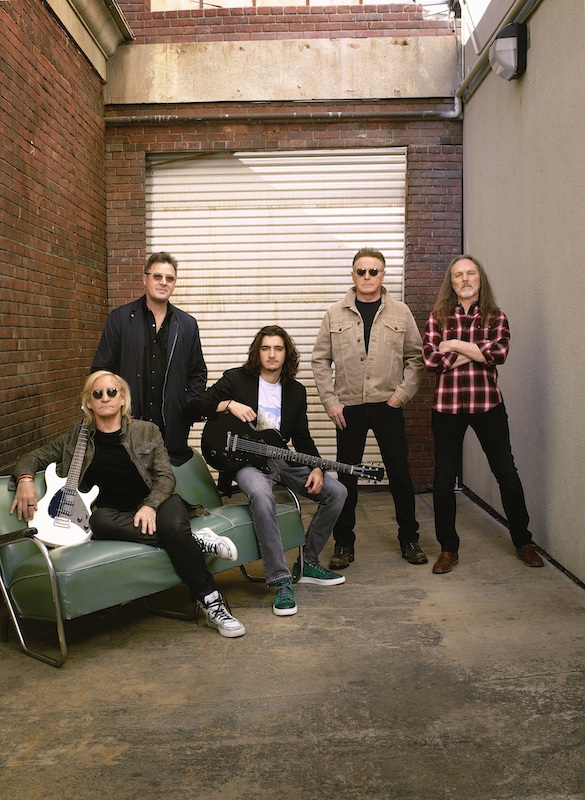 The Eagles – Photo by George Holz

Iconic, timeless, and unmissable, The Eagles will close the first weekend at BST Hyde Park on Sunday 26th June celebrating 50 years of their career.

For BST Hyde Park show, The EAGLES – Don Henley, Joe Walsh and Timothy B. Schmit, with Vince Gill and Deacon Frey – are joined by special guests Robert Plant and Alison Krauss. Performing classics spanning across their career, including “Hotel California,” “One of These Nights,” “Life in the Fast Lane,” “Desperado,” and many more.

In today’s faddish, fractured, rock landscape, the Eagles retain an appeal that transcends both generation and genre, cementing the band’s role as enduring musical icons. As the best-selling American band of the ’70s, and one of thetop-selling acts of all time, the Eagles have sold more than 200 million albums worldwide, scored six #1 albums and topped the singles charts five times. They have won six GRAMMY® Awards, were inducted into the Rock & Roll Hall of Fame in 1998, in their first year of eligibility, and received the Kennedy Center Honors in 2016. The RIAA recently certified Their Greatest Hits 1971-1977 as the best-selling album in history (38-times Platinum) and Hotel California as the third best-selling album (26-times Platinum).

This entry was posted on Thursday, June 9th, 2022 at 10:00 am and is filed under Great Outdoors. You can follow any responses to this entry through the RSS 2.0 feed. Both comments and pings are currently closed.