When you talk about British people with foreigners, what immediately springs to mind is Tea Time. It might be a stereotype but it is very truthful. At 4pm a genuine English person needs a  cup of tea and a biscuit 🙂 Well, as an Italian, I have totally bought into that habit and I feel more British in that respect than some native folks. That attitude helped me feel at ease when I met Mr Stephen Twining in person a week ago for my Quintessentially British experience week. 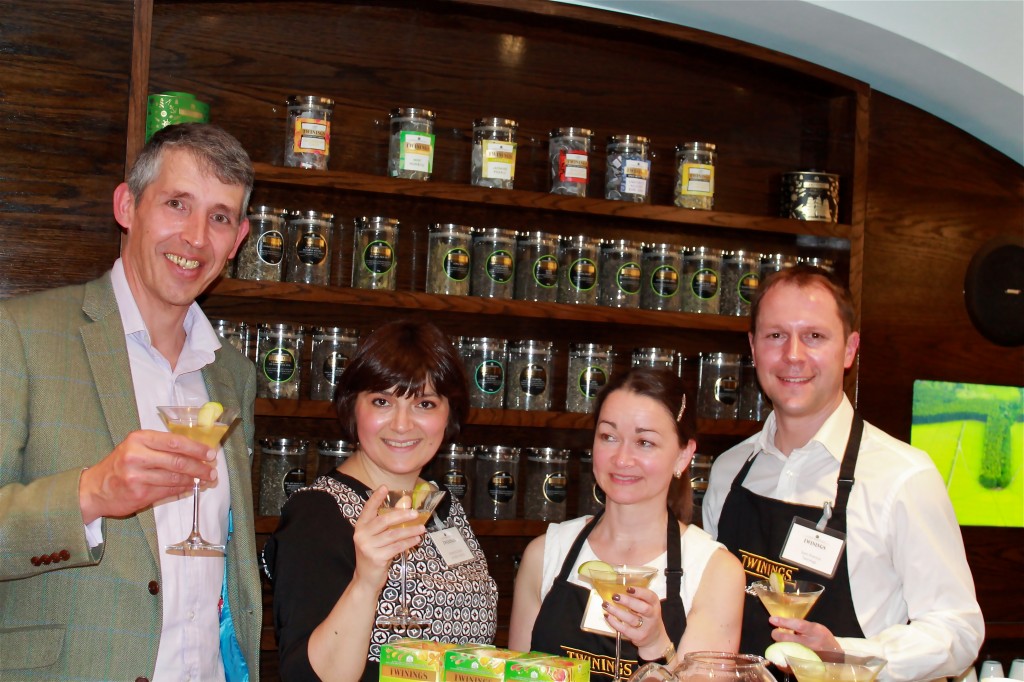 In true English style I arrived in time at the Twinings tea shop which t is a proper museum showcasing the history of Tea Time. I recommend you pay a visit to it conveniently located in front of the Royal Court of Justice at 216 Strand – London WC2R 1AP. Thomas Twining bought this shop in 1706 and has been selling Twinings teas for the past 300 years. The shop has lots of historical memorabilia to impress all tea time fans and is a sort of museum of tea history.

The location of the shop was perfect as it straddled the border between Westminster and the City of London, an area that was newly populated with the aristocracy displaced by the Great Fire of London. By this time Coffee houses were a popular feature of London life.  Men – but never women – of all classes would gather there to drink, gossip and to do business. Coffee shops gathered a loyal clientele by specializing in particular products or by encouraging customers with common interests. Poets for instance would go to one establishment, army officers to another.

Competition between coffee houses was stiff. Fresh ideas and unusual promotional twists were what kept the business alive. The difference at Tom’s was tea. Despite efforts to repress tea-drinking through punitive taxes, tea became increasingly fashionable during the early part of the 18th C, especially among the upper classes, and they flocked to buy tea from Toms Coffee House. In fact, soon he was selling more dry tea than wet – we think it was probably the world’s first dry tea and coffee shop.

When I told some friends that I would meet Mr Twining in person they said that he would not actually exist and that Twinings is just a name of a tea brand. But I proved them all wrong.

The history of tea time

In fact, the history of tea would be completely different if there hadn’t been a Mr Thomas Twining, who bought Tom’s Coffee House at 216 Strand, London from D’Aethback in 1706 and in addition to coffee, also started selling tea, and soon got a reputation for having the some of the finest blends in London. Soon he was selling more dry tea than brewed. By 1734, Twining focused almost exclusively on tea, having given up coffee. One of the reasons could be that ladies were champions of the tea as they could not go into coffee houses. So unthinkable these days but it was a reality between 1706 and 1734.

The Twinings firm’s logo was created in 1787 and is the world’s oldest in continuous use.

When the tax on tea was high, people were putting leaves and other herbs to make tea. Richard Twining lobbied to the Prime Minister of the time and convinced him to decrease the tax. The tea was sourced from China and this is still reflected in the Strand’s door logo. The 4th generation of Twinings made customised tea such as Earl Grey tea to important people such as the Prime Minister. In 1837 Queen Victoria appointed the company as the official royal suppliers of tea. The export of tea from the UK reaches now 150 countries.

There are legends and myths around the origin of tea. A great story is the one about the China Emperor who was sitting close to a boiling water bowl when suddenly a leaf from a tree fell in it. This is supposed to be how tea was born. Chinese get the credit for tea. Initially tea was found in China but then also in Assam. A lot of the tea we drink comes from Asiatic regions other than China.

The porcelain pots are also called China because they came with the tea in the ships from China and often arrived cracked.

The art of tea blending 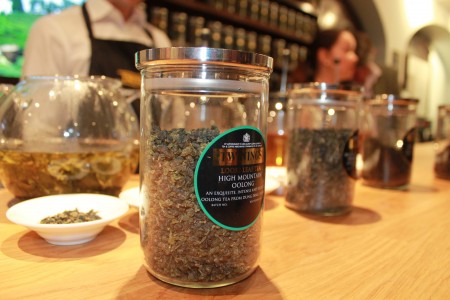 The company sells a variety of regional and flavoured teas such as Lapsang Souchong, Lady Grey, and Darjeeling, as well as infusions, coffee, and hot chocolate. Earl Grey tea, a tea infused with bergamot, is probably the most famous blend.

I learnt a lot about the art of tea tasting and the art of creating a flavoured tea.

Master blenders receive 5 years of training and they finally get a spoon with their name engraved. They travel  15 different countries to source the teas that is then used for the blending. The process is complicated and each blend can contain up to 40 different teas. I did not expect that at all. The blenders follow a recipe which would contain certain ingredients and flavours depending on the blend required.  Single origin is important to determine the taste. Each tea has unique characteristics:
Altitude from where the tea grows and the factory where it is produced can make a difference too. There are different type of bergamots you can get and they would taste different from each other.

Oolong tea is like rose wine fermented towards the green end of the scale and is from Taiwan. Its aroma is natural and comes from the soil that gives it a thick full flavour – between green and black tea.

First flush Darjeeling is aromatic and is a type of black tea despite its greenish colour.

Keemun Mao feng has a nutty flavour and is ideal for afternoon tea because it is refreshing  and I dare say that is a quintessentially British tea.

Second flush Assam is a nice rounded malty smooth thick brew – it has a more robust flavour and is also a very English tea. I mean that you would be offered such a tea in every traditional British home.

1. Traditional Black tea requires 3-5 minutes sitting is freshly boiled water – not reheated water otherwise it’s less oxigenated and does not taste as good. I did not know that and since finding out I tried it and really noticed the difference.

2. Let the water cool it a bit before putting the tea bag – this is especially important for green tea which might loose its antioxidant properties if the water is too hot.

3. With good quality leaf tea, you can re-brew it a few times. I use a Bodum tea pot and it works well to re-brew the tea. Green tea is particularly suitable for re-brewing.

4. It is historically correct to put the milk first and then the black tea.

5. Have you ever asked yourself what is  a great tea to drink with a bar of chocolate? Well, Mr Twining suggested that with milk chocolate, the best tea is Assam as it counteracts the sweet cocoa flavour. Lady grey or Rose garden teas also good with chocolate, in my personal opinion.

6. Traditional afternoon tea is Stephen Twining’s own favourite tea and also the most popular choice in Britain.

7. Leave the boiling water for 5 minutes before adding the flavoured green tea bag – then brew it for a maximum of 2 minutes.

8. Only if you have very large tea leaves you should leave them for longer because it takes longer for the water to filter through the leaves.

9. If you make your tea-based alcoholic cocktails remember that any alcoholic drink that has tea in it would go into blood stream faster and would make you feel merry quicker. I can confirm that and the alcohol level cannot be tasted much so it is quite a dangerous mix if you are not used to drink 🙂 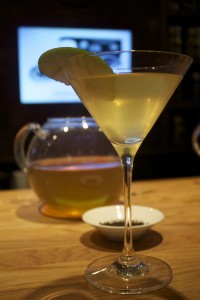 It emerged from the conversations with the master blenders that it is now popular to create flavoured green teas and other blends based on flavours’ trends. Tea companies oursource this to trend spotters across the world who also carry on research on behalf of perfume and food companies. The current trends show people’s inclination towards green and natural types of teas due to health concerns.

The task faced by the blend masters are to often create new teas based on a trend. Flavour companies also supply perfume companies right at the end of fashion.
One of their task might be to create a tea flavour based on the latest fashion on the catwalk based for example on Pastel trends from the Fifties.
When you choose a blend you look at the colours, the style of the dresses, the element of retro, 50s trend cocktails. The tea also needs to reflect that soft delicate taste.
One of the flavoured teas that was based on this 50s retro trend is for instance the peach flavoured green tea and the cherry blossom one. I found it extraordinary especially because I discovered that I have the exact profile of the customer defined by this research.

New flavoured green teas are also created to appeal to non green tea drinkers using flavours that are attractive to the consumers and give the impression on sweetness
such as the new caramelised apple tea with a bit of Cinammon in it – the flavour is with extracted oils created in laboratory from natural flavours – Salted caramel green tea and the Ginger bread green tea.

This entry was posted on Tuesday, June 3rd, 2014 at 12:00 pm and is filed under Great Indoors. You can follow any responses to this entry through the RSS 2.0 feed. Both comments and pings are currently closed.