A new landmark exhibition dedicated to JMW Turner (1775-1851) at Tate Britain called Turner’s Modern World explores what it meant to be a modern artist during his lifetime. Personally I believe that Turner is one of the most innovative artists of all time, ahead of his time and crucial to the inspiration of Impressionists and other artistic movements that started a century after he created some of his most famous artwork. Turner’s Modern World is absolutely unmissable for anybody including children of all ages. 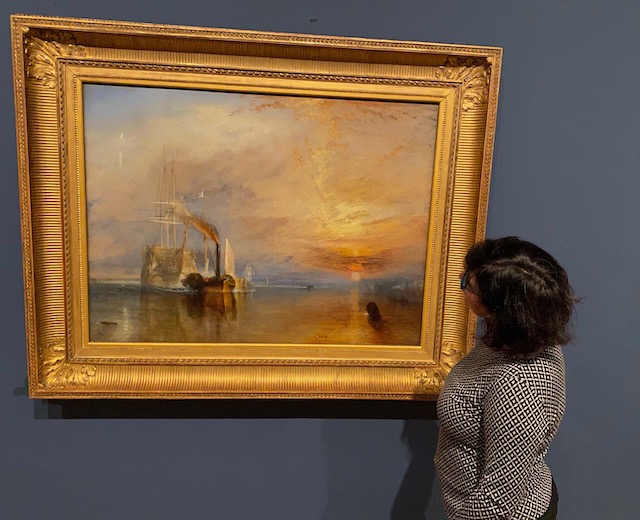 The fighting Temeraire tugged to her last berth to be broken up (oil paint on canvas, 1839) – I was impressed by this painting and how modern it is considering it was painted in 1838. Unsurprisingly, Turner later described it as his ‘first, almost prophetic idea of smoke, soot, iron and steam’. Turner called it his ‘darling’ and refused to sell it. He intended it for the National Gallery, which sits in Trafalgar Square, named after the battle in which the Temeraire had served.

Turner’s Modern World reveals how Britain’s greatest landscape painter found new ways to capture the momentous events of his day, from technology’s impact on the natural world – the industrial revolution was happening during his lifetime – to the dizzying effects of modernisation on society.

The exhibition brings together 150 key works, including major loans as well as paintings and rarely seen drawings from the rich holdings of Tate’s collection and others, including The Fighting Temeraire 1839 and Rail, Steam and Speed 1844. It’s rare to see so many Turner’s paintings under one roof and displayed following sociological themes. I’ll probably visit the exhibition again before it goes away. It’s on between 28 October 2020 and 7 March 2021. 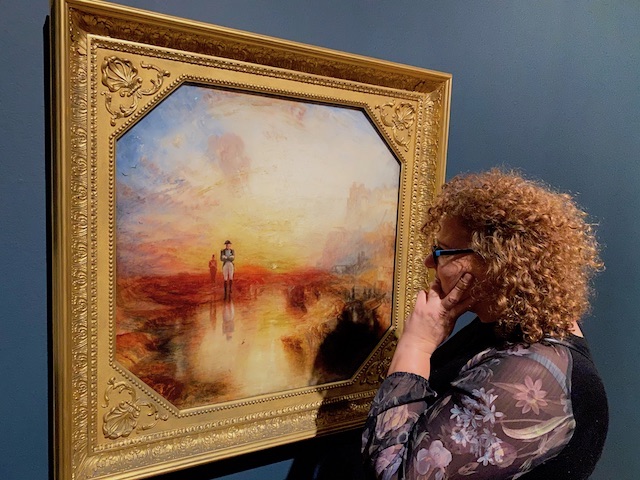 London Mums’ contributor Laura reflects on Turner’s ‘War. The Exile and the Rock Limpet‘ (1842). The painting represents Napoleon in exile on St. Helena, watched over by a British sentry. Perhaps painted as a response to the pomp of Napoleon’s state funeral in December 1840, Turner shows him instead meditating on his fall from power. Even a mollusc has more self-determination than the former emperor. The lurid sky and a sluice gate in the shape of a butcher’s cleaver bring carnage and bloodshed to mind, the deaths of thousands being the price of Napoleon’s ambition.

J.M.W. Turner is possibly Britain’s greatest artist. He lived and worked at the peak of the industrial revolution at a time in which steam replaced sail, machine-power replaced manpower, political and social reforms transformed society.

Many artists ignored these changes but Turner faced up to these new challenges. This exhibition shows how he transformed the way he painted to better capture this new transforming world. This is what actually made Turner’s work so modern and innovative. 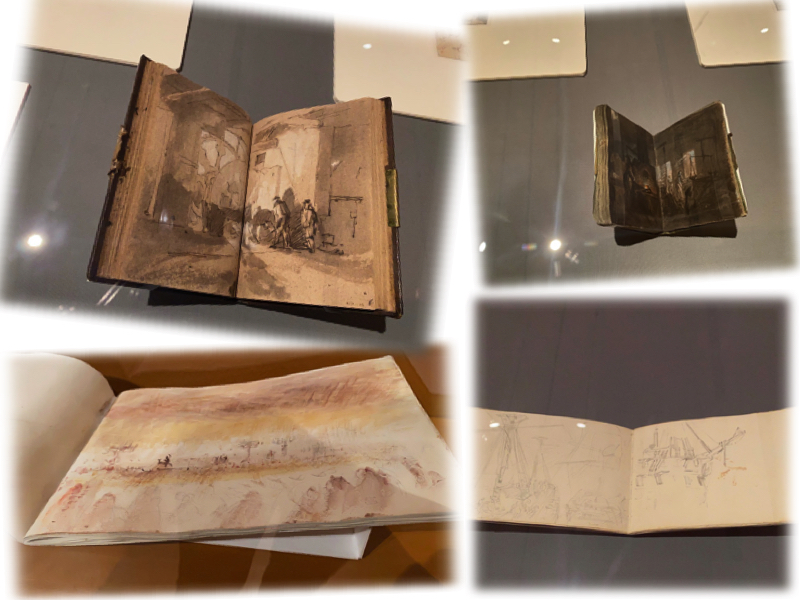 I was fascinated by Turner’s sketchbooks on display. They reveal insights into his incredible talent and observation skills.

Beginning in the 1790s, when Turner first observed the effects of modern life, the exhibition follows his fascination with the impact of industrialisation. It shows how he became involved in the big political questions of the time: campaigning against slavery and making paintings that expressed the horrors of the Napoleonic Wars. 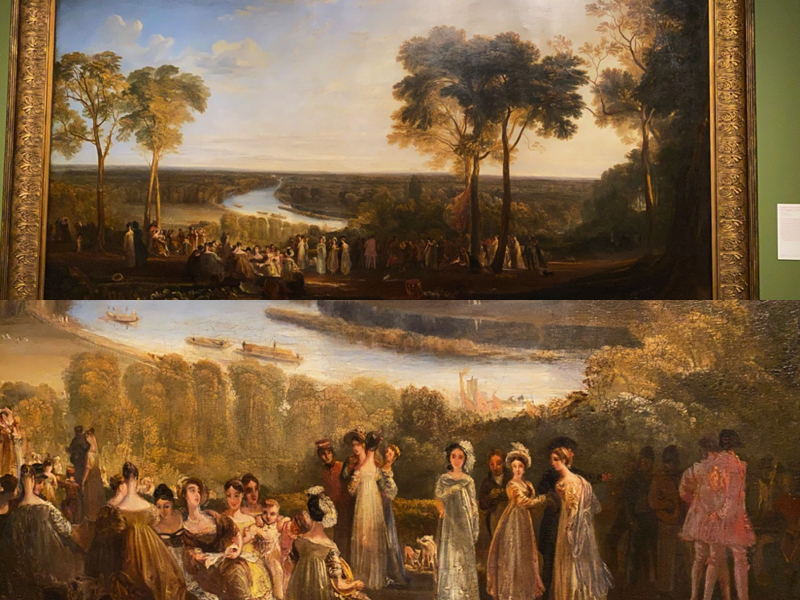 Being a local in Richmond, I was impressed by this massive oil paint on canvas called ‘England: Richmond Hill, on the Prince Regent’s Birthday’ exhibited in 1819. This was Turner’s largest painting yet when he exhibited it in 1819. It shows him making an unambiguous bid for royal patronage. As its title makes clear, the painting celebrates both the birthday of the Prince Regent (later George IV), and the splendour of the English Landscape. The river Thames, a potent symbol of national identity, is at the centre. Despite Turner’s best efforts, the painting went unsold, and it remained in his possession until the end of his life. 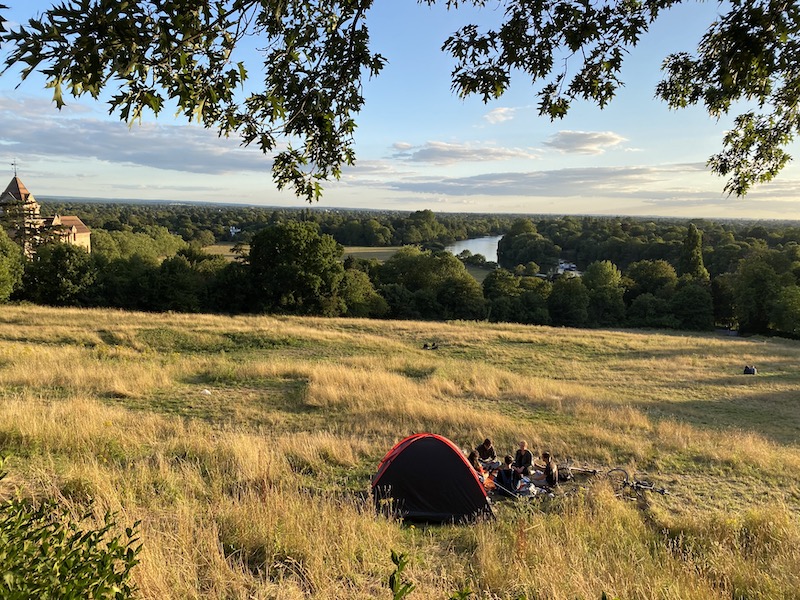 During the pandemic, there’s little to no entertainment in London and museums like the Tate galleries are doing a sterling job at boosting our art knowledge with so many new inspirational shows.  We should support their effort and attend as many exhibitions as we can bringing kids along. They are all Covid-safe but you need to book your slot in advance to guarantee safety. You can do it by calling +44(0)20 7887 8888 or via the website tate.org.uk.

This entry was posted on Wednesday, October 28th, 2020 at 7:00 am and is filed under Great Indoors. You can follow any responses to this entry through the RSS 2.0 feed. You can skip to the end and leave a response. Pinging is currently not allowed.