There are many activities to get the kids busy with over the Christmas holidays. The Snow Queen: An Online, Storytelling Adventure, adapted and directed by Natasha Rickman, presented by the Iris Theatre has plenty of interactions for the families with very young children (for ages 4+) and runs until 26 December. It is recommended for a very young audience. As a parent of a teenager I could not relate any longer. But I could see children on zoom very intrigued by the stoy and involved in the activities. 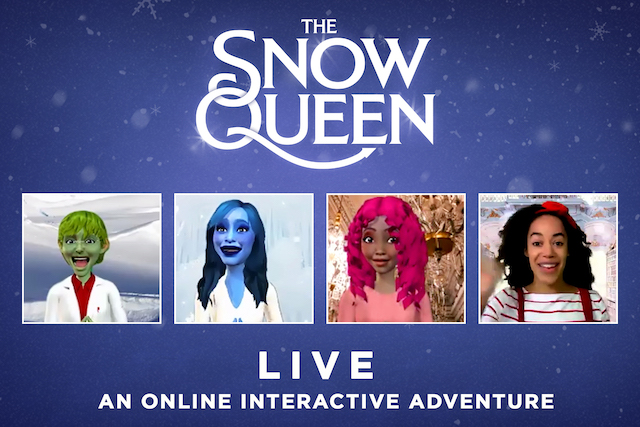 Stories get delivered to Holly’s door and then…she tells them. Easy! Right? Except today a new story has been delivered but it’s freezing cold, so cold in fact that Holly can’t even open the pages. She’s going to need a bit of help with this one…and that’s where you come in!

From the comfort of your home, kids and grandparents can join Holly this Christmas for a magical, snow-filled adventure, inspired by the classic fairy tale ‘The Snow Queen’. I loved watching families clap their hands, make some magic and join in with the whole family, wherever they are in the world.

Created especially for Zoom and using brand new technology from Loom.ai, the show will mix live performance with interactive 3D avatars for a fun filled, festive storytelling adventure. Audiences can join in to help bring the classic fairy-tale to life and families can download a free activity pack filled with fun games and craft ideas based on the show.

The technology for the production is coordinated by early career Tech Operator Orion Slater, and Sound Design is by Matt Eaton.

Matt Eaton is a sound designer and composer. His credits as a sound designer include All’s Well That Ends Well (Guildford Bard/ Jermyn Street Theatre – for which he won the Off West End Award for Best Sound Design), Everything I See I Swallow (for which he also composed, Edinburgh Festival Fringe) Brave New World (Creation Theatre Company), Furious Folly (14-18 NOW), Pool Panic (Nintendo Video Game),  Everything Must Go (Friction Arts, Birmingham), The Crucible, Orlando (The University of South Florida), and Pyar Actually (Rifco Arts). As composer, his credits include A Page of Madness, Faust (Flatpack Film Festival), Nosferatu (Warwick Arts Centre), The Cabinet of Doctor Caligari (Midlands Arts Centre), and The Picture of Dorian Gray (Trafalgar Studios).

Orion Slater is a theatre technician and designer. As an intern for Creation Theatre, he rigged and operated sound and video for Time Machine: A Virtual Reality, and was Tech Operator for the Zoom production of Merry Wives of WhatsApp. Slater is part of the National Youth Theatre for 2021.

To get tickets check the Box Office link.

This entry was posted on Monday, December 21st, 2020 at 2:31 pm and is filed under Activities. You can follow any responses to this entry through the RSS 2.0 feed. You can skip to the end and leave a response. Pinging is currently not allowed.