FREE LONDON: A Bowler Hat, A Tin Soldier and some Misunderstood Monsters

FREE LONDON alert! There is something quite extraordinary about to come to the City of London.  A giant inflatable Bowler Hat will shortly be found beside St Paul’s Cathedral in Paternoster Square.  It is something we are bringing for this years’ City of London Festival and it will be in place from 23 June to 17 July. 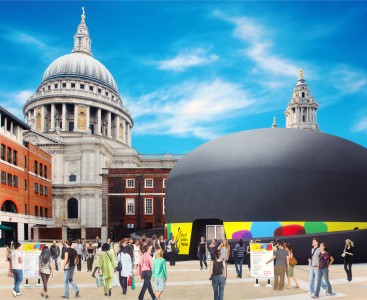 Inside the Bowler Hat will be a theatre which will host comedy, cabaret, circus but also lots of children’s theatre.

The Festival has for many years had a Children’s parade which sees hundreds of school children walk from The Guildhall to St Paul’s Cathedral but this is the first time we have had a run of children’s theatre performances.  We love seeing children in the City and are delighted that we will be able to see more heading to our new venue.

We really hope you will come and give our shows a try, after all it’s not everyday you get to see a show inside a giant Bowler Hat.

Tags:  children's theatre LONDON FOR CHILDREN
This entry was posted on Wednesday, June 18th, 2014 at 12:15 pm and is filed under Central London. You can follow any responses to this entry through the RSS 2.0 feed. Both comments and pings are currently closed.