The enchanting world of CBeebies’ hit animated series Sarah & Duck will be brought to life on stage for the first time this Spring. Featuring a host of wonderful characters from the BAFTA Award-winning show, embarking on a brand new adventure, Sarah & Duck’s Big Top Birthday will play at Polka Theatre from Thursday 6 April to Sunday 14 May 2017, with a UK Tour launching from Eastbourne Hippodrome on Monday 29 May 2017. 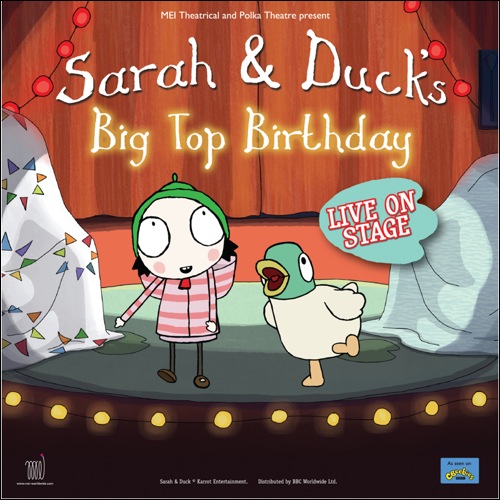 Join Sarah and Duck, along with all their favourite friends including The Ribbon Sisters, The Shallots, John and Flamingo and Umbrella, as they plan a circus-themed birthday party for Scarf Lady in their garden. But when the weather turns windy and the big top is blown away, will Sarah and Duck be able to save the day? Told through a fantastic blend of inventive puppetry, charming storytelling and toe-tapping music, Sarah & Duck’s Big Top Birthday will take families and children on a magical theatrical adventure.

Venue: Premiering in Wellingborough on 1st April, heading to the Polka Theatre from 6th April – 14th May then across the UK at a venue near you!

Following the gentle adventures of a wide-eyed, 7-year-old girl and her feathered best friend, Sarah & Duck has been a huge hit since its debut in 2013, regularly appearing in CBeebies’ Top Ten programmes (BARB) and Broadcast’s Top Ten shows for viewers aged 4-15. Not only did the series scoop a BAFTA for ‘Best Pre-School Animation’ in 2014, it also came second in the Radio Times & BFI’s favourite BBC children’s characters of all time poll in the 2000s + category. Internationally, the series is now shown in over 100 countries airing on CBeebies global channels as well as other key international broadcasters including Sprout and Netflix in the USA, ABC Australia, Canal + in France, Kika in Germany, Disney Jr in Canada and NHK Japan.

Sarah & Duck is a Karrot Entertainment production for CBeebies UK and BBC Worldwide. It was co-created by Karrot Entertainment’s Creative Director Tim O’Sullivan and designer/writer Sarah Gomes Harris – based on her own love of ducks as a child. The producer is Jamie Badminton and the executive producers are Alison Stewart, Chris White and Henrietta Hurford-Jones.

This entry was posted on Wednesday, March 29th, 2017 at 12:21 pm and is filed under Activities. You can follow any responses to this entry through the RSS 2.0 feed. Both comments and pings are currently closed.