Go on, be ExpeRimental and get stuck into science!

I have what I believe is the best job in the world, I spend my days as the Science Learning Manager at the Royal Institution (home of the famous CHRISTMAS LECTURES) coming up with ideas about how to get people excited about science. My goal is to make science accessible, enjoyable and meaningful for everyone, regardless of their background, location or previous experience with the subject.

I’m also a London mum of two girls, Viola aged 6 and Elodie aged 3, and I find it incredibly satisfying to help them explore their natural curiosity about the world around them and how it works. This makes me especially passionate about supporting parents to get stuck into science at home so that they too can enjoy the same experiences. 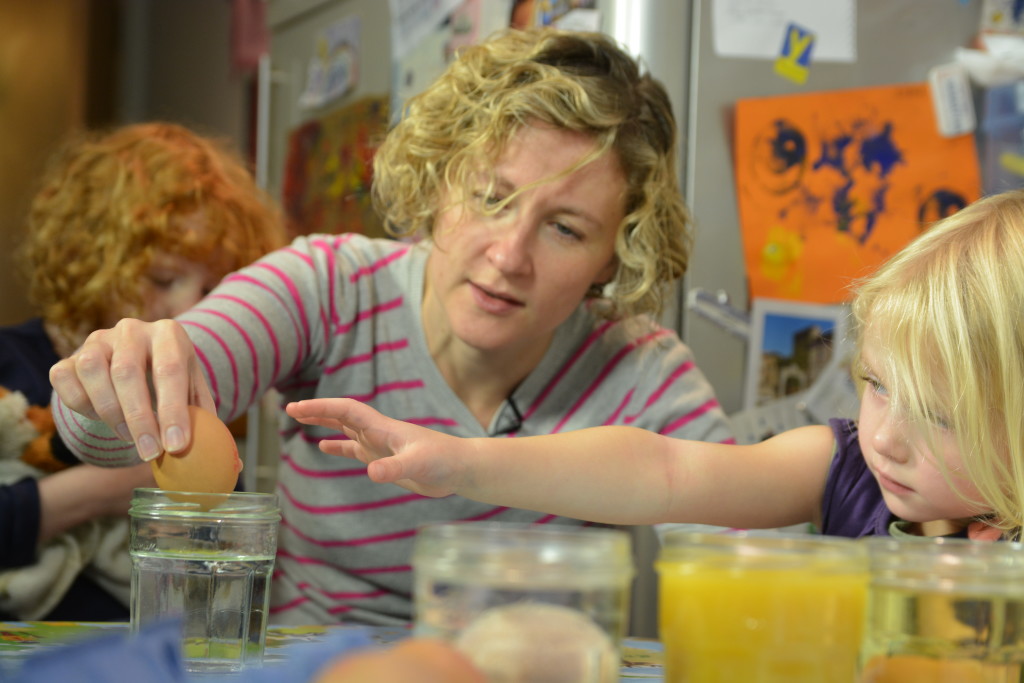 That’s why I’m so proud of our latest project, ExpeRimental.

ExpeRimental is a series of free on-line videos presented by real families, mine included, that provide parents of children aged 4-9 with a huge range of simple, fun and cheap science activities to do with their children in the kitchen, the bathroom, the garden or the park down the road.

The films and accompanying resources explain key scientific concepts in everyday language and show you how to investigate and test these concepts with your children in a very hands-on (and sometimes messy!) way. What makes Experimental films stand out from other ‘how to’ resources is that they encourage and support you to go a few steps further than just the activity by asking your child a series of questions. We want parents to have the confidence to prompt their children to approach a problem or phenomena in the way a real scientist would – to look more closely at the activity, to make predictions, and to think more deeply about the scientific concept the activity investigates and how it applies to the world around them. And this can be easily achieved regardless of how much or how little science you’ve done before.

I wanted to start ExpeRimental because I believe that science is an integral part of our cultural and social make up, and that it should be introduced to children from a young age by parents or grandparents in the same way that art, crafts, drama or cooking are. Science isn’t a subject that can only be tackled by teachers in a school environment, it doesn’t need to be put off until the children are ‘old enough’, and a reliable science experiment certainly doesn’t always need expensive or complicated bits of kit.

I’d love to see more adults take ownership of science and feel in control of the subject, rather than shy away from it as something that is scary, alien, difficult or simply boring. I hope ExpeRimental reassures parents that it’s okay not to know the answer to every question, and that all parents get tripped up or surprised by what their children say. I had my own experience of this with Viola in the Home-made lava lamps film we made together with her unexpected response to my question at 4:48. Even professional scientists get stumped and it’s the ‘not knowing’ that drives them on!

There is a wealth of evidence that shows that the attitude shown towards science at home is a major factor on children’s likelihood of wanting to study science related subjects in the future. According to the 2014 IPSOS Mori report ’Public attitudes to science’, 84% of the UK public agree that science is such a big part of our lives that we should all take an interest, but only 41% of adults and 51% of 16-24 year olds feel informed about science.

An independent report by authors Goodhall and Vorhaus for the Department of Education in 2011 found that parental engagement has a large and positive impact on children’s learning, but only a third of parents feel confident in helping with their children’s homework. Worryingly, according to research by the Wellcome Trust, science is now mostly taught by non-specialists in primary schools and nurseries and the amount of time devoted to science in the primary phase has declined in recent years. So choosing to ‘save science for school’ may not be the most risk-free approach for parents to take.

If children are put off studying science and mathematics then they risk missing out on a phenomenal range of rewarding, exciting and challenging adventures in their future career. But even for children who choose not to go into a science-related career, if everyone had a better understanding of some basic scientific principles, it would navigating modern life easier. Everything from understanding technological and medical advances, reading stories in the newspaper, to choosing who to vote for can be helped by understanding and appreciating a bit more science.

I really hope other mums reading this blog are inspired to have a go at an ExpeRimental activity and enjoy the same sort of quality moments I have had with my girls, like when Viola dropped an egg on herself and we couldn’t stop laughing or seeing the astonished expressions on their faces when they discovered the egg had turned soft when we made the film Eggsperiments. It’s incredibly satisfying finding out how much of what we’ve done together has ‘stuck’ with them too, they often ask me if we can do the activities again and during a recent family fish and chips night they remembered that it was vinegar that made the bicarbonate of soda fizz. That activity is in our film ‘Fizzy cubes’ which will be out soon.

Hopefully ExpeRimental will be the start of whole new revolution of parents doing science at home, I do hope you join us!

Find out more about ExpeRimental at www.rigb.org/experimental, share your feedback and photos on the Ri’s ExpeRimental Facebook page and on Twitter @Ri_science, and get in touch with Oly via @olydbrown. Subscribe to the Royal Institution’s YouTube channel to the first to watch the latest ExpeRimental films and more.

Olympia Brown is The Science Learning Manager responsible for running the CHRISTMAS LECTURES at the Royal Institution working closely with the television production team in the selection of both the theme for the lectures and the Christmas lecturer themselves. She manages the process from start to finish; working with a large team of TV producers, script writers, demo designers and a whole host of others to create the 3-lecture series. In her role, Olympia deals with a wide range of scientists, including Nobel Prize winners, as well as lots of children and various animals, all while ensuring the lectures are delivered on time and within budget!

Tags:  little scientist experiments science science for kids science museum
This entry was posted on Tuesday, March 3rd, 2015 at 11:30 am and is filed under Activities. You can follow any responses to this entry through the RSS 2.0 feed. Both comments and pings are currently closed.