Harry Potter fans of all ages will love the Harry Potter Studio Tour at Warner Bros Studios. This behind-the-scenes walking tour immerses guests into the world of film-making. The Tour features authentic sets, costumes and props that showcase the British artistry, technology and talent that go into producing all eight Harry Potter films.  Highlights include walking through the Great Hall where so many famous scenes were shot, seeing the treasures stored in Dumbeldore’s office and strolling down Diagon Alley. 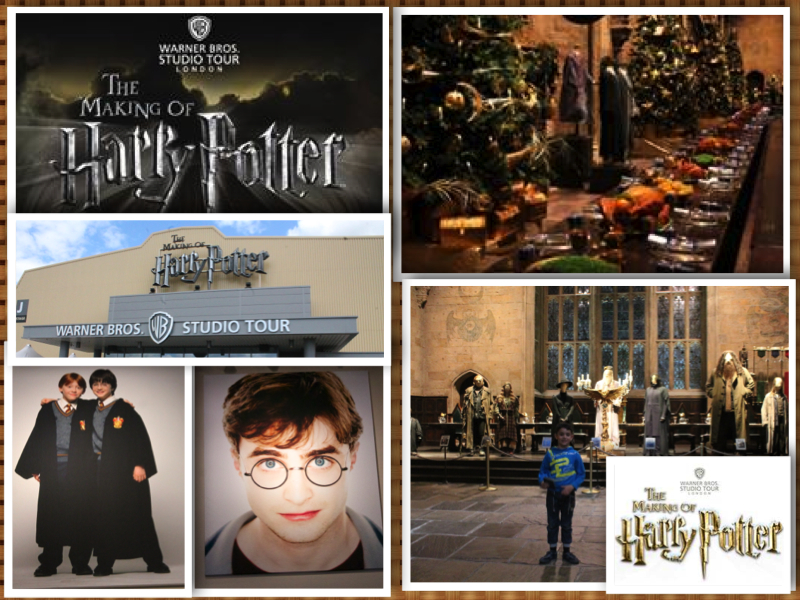 The visit requires at least four hours but we could have easily spent a whole day inside the studios hadn’t our tour been scheduled for 1,30pm. If you are keen to go, you should book in advance as it is always sold out.

The Warner Bros Studios Tour is very long and filled with lots of details, props, movie sets. For us the highlights of the tour were:

1- The Hogwarts Great Hall – it is exactly as big and majestic as we imagined it. Diego looked really tiny next to Hagrid! 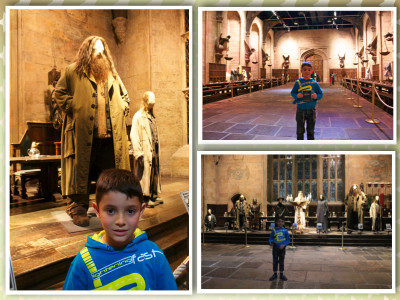 2- How the spellbinding special effects of flying brooms are done as well as all flying effects. 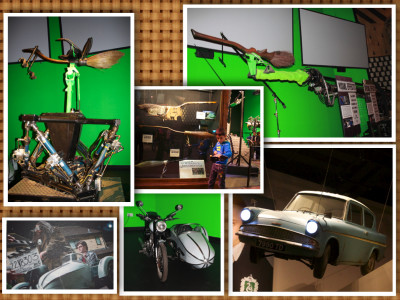 3- The Hogwarts Express steam engine has been included in the Harry Potter Studios Tour from 19th March 2015 so we have been lucky to have seen it as it is simply stunning. The train is an original working steam engine parked at a recreated station platform which is really realistic. You can board the train and take lots of photos and footage. Entrance to the recreated Platform 9 and 3/4 is included in the ticket price. 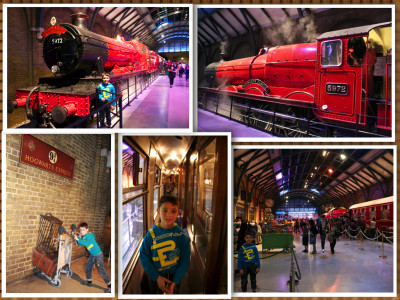 One of the facts we learnt is that most of the snow used on the Hogwarts castle model throughout the Harry Potter film series was a mixture of paper and dendritic salt.It was used because it clumps like snow and even squeaks when walked on. 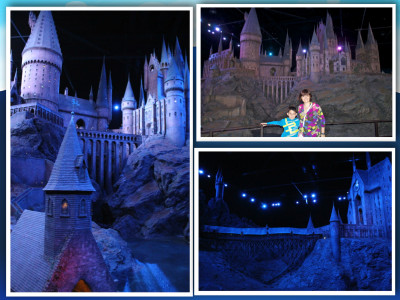 During filming, a member of the crew climbed aboard an elevated work platform and sprinkled the mixture onto the model by hand with a sieve – like dusting sugar onto a cake.

5- The Props and Special Effects 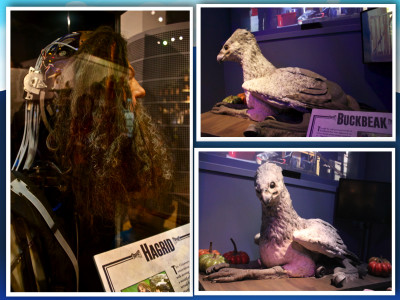 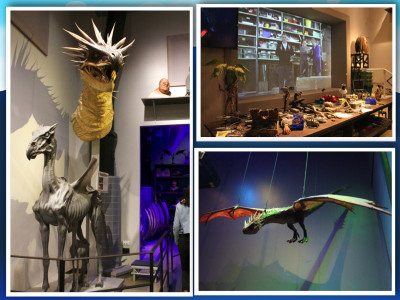 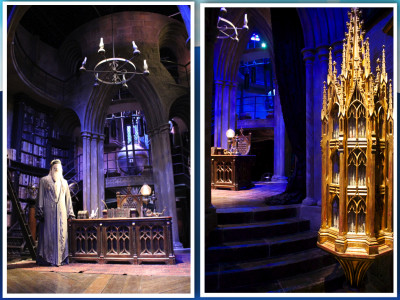 The Potions classroom is full of the real contents of the potion jars used during the films. Over 500 of the original jars are displayed all with handwritten labels. While on the tour, you realise the level of details that has gone into these movies. 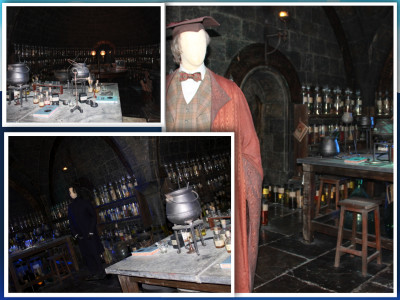 We heard that the directors wanted the sets to look real even if not everything was in the shots to ensure accuracy and adherence to the books.

The interior of the famous ginger family residence is all so neatly decorated and interactively connected to buttons that children can press to activate magic to all house tools. Brilliant!

You can see the hand-knitted jumpers that Molly Weasley gave Ron and Harry for Christmas in Harry Potter and the Philosopher’s Stone. 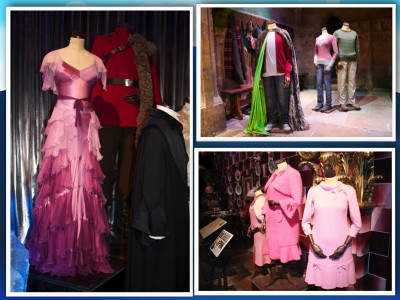 Other costumes on display include one of the first Christmas presents Harry ever received at Hogwarts, his Invisibility Cloak, and the dress Luna Lovegood wore to the Slug Club Christmas party in Harry Potter and the Half-Blood Prince.

Make sure you have enough photos in your camera. Call us fanatics, but we took over 300 pictures during the tour! 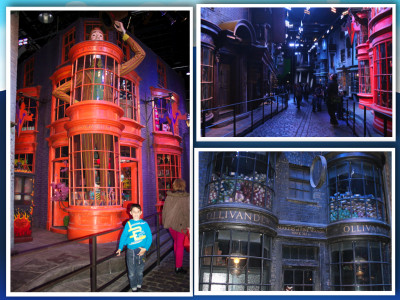 How to get there

The Warner Bros Studios are located in Leavesden near Watford. If to are travelling by public transport – as we did from SW London, the closest station to the studios is Watford junction (if you travel by train). It’s approximately a 40 minutes journey from Clapham Junction.

Ideally you would be driving to the studios but for those who don’t want to dare facing the London traffic, the train connection is good.

Eating at the Studios

We had a Buyagift voucher available from www.Buyagift.com which sells a brilliant experience package called The Making of Harry Potter Studio Tour with Lunch for Two at De Vere’s Hunton Park luxury hotel nearby. Although the hotel is located a mile away from the Studios, you cannot really walk there. Without a car, a taxi booked by the receptionist at the Studios costs £12 for 5 minutes ride (!) while if will only costs £6 if booked from the hotel to come back. Just so you know. As there isn’t much choice of food at the studios I would recommend getting the children to eat at the hotel beforehand before you visit the studios.

The gift shop is amazing but be warned as it is terribly expensive. Make sure you do some research before you visit, if you are particularly interested in buying a particular wand or jumper. There are certain items that can be purchased cheaper on eBay (even the same brands).

Every area of the Studios has photo boots to take fancy pictures but they all cost a fortune and by the time you get to the shop you are poor!

As much as I loved the Gryffindor’s jumpers (which are of very good quality) they cost approx £70 each so we didn’t think we would wear them enough to justify the expenditure.

At the end of the day what we enjoyed the most was the tour itself and learning all about turning a great story into a film. This is really what is worth your money. 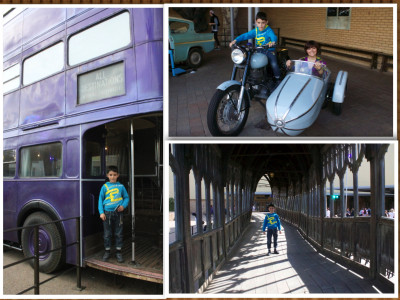 Throughout the tour you discover lots of the secrets behind the Dark Arts and how the Dark Arts were brought to life in the films.

An extra layer of fabric was added to Voldemort’s costume every time he became more powerful. During filming for Harry Potter and the Order of the Phoenix™ over 50 meters of silk were used.

Aragog, the giant spider, was covered by hand with yak hair, sisal and hemp from brooms.

Each werewolf prosthetic was made with real goat hair that was inserted strand-by-strand.

The Prophecy orbs are made of glass and were filled with seed pods, mushrooms, mussels and rubber frogs.

Remember that tickets must be pre-booked at www.wbstudiotour.co.uk and cannot be bought at the attraction.

This entry was posted on Friday, June 19th, 2015 at 8:58 pm and is filed under Attractions. You can follow any responses to this entry through the RSS 2.0 feed. Both comments and pings are currently closed.