West End Show review: THE IMPORTANCE OF BEING EARNEST

Finding yourself totally immersed and laughing out loud in a theatre play doesn’t happen every day, not even in the London West End. Well, for a seriously hilarious night out in London I recommend the latest production of Oscar Wilde’s much-loved classic play, The Importance Of Being Earnest, starring David Suchet (known for his role as Inspector Poirot) as Lady Bracknell. 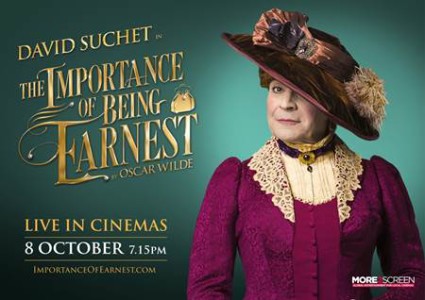 Those who won’t be able to go to the lovely London’s Vaudeville Theatre on the Strand a LIVE broadcast of  this show will be screened across 350 cinemas in the UK and Ireland  on Thursday 8 October 2015, with additional backstage footage and cast interviews exclusive to the cinema event.

With its high farce and witty dialogue The Importance of Being Earnest is one of the finest plays in the English language and Oscar Wilde’s most enduringly popular play. It fizzes with wit as he delights in debunking social pretensions. Two bachelor friends, aristocratic dandy Algernon Moncrieff and the most reliable John Worthing J.P., lead double lives to court the attentions of the desirable Gwendolyn Fairfax and Cecily Cardew. The gallants must then grapple with the uproarious consequences of their ruse, and with the formidable Lady Bracknell.

The play has a truly amazing cast starring David Suchet (familiar to millions of TV viewers as the detective Hercule Poirot), who plays the role of the formidable Lady Bracknell, Michael Benz (Downton Abbey, Mike and Angelo, Little Lord Fauntleroy, Twelfth Night, Hamlet, As You Like It),  Philip Cumbus (A Touch Of Frost, My Hero, Hope and Glory and Our Brave Boys, ‘Tis Pity She’s a Whore,The Macbeth, Much Ado about Nothing), Emily Barber (Billy Liar, Cornelius, The Hired Man, Fiddler on the Roof and Orpheus & Eurydice), Imogen Doel (The Get Out, Gastronauts, Primetime, Collaboration, In the Vale of Health, Serpent’s Tooth), Michele Dotrice (Betty in Some Mothers Do ‘Ave ‘Em, Captain Jack, The Witches, And Soon The Darkness and Jane Eyre, When We Are Married, Richard III) and Richard O’Callaghan (Carry On Loving and Carry On at Your Convenience, Casualty, Red Dwarf, Dalziel and Pascoe).

Following a six week UK tour, The Importance Of Being Earnest opened at the Vaudeville Theatre on 1 July 2015, and is directed by the multi-award winning Adrian Noble, a former Artistic Director of the RSC whose extensive theatre credits range from Chitty Chitty Bang Bang at the Palladium to Who’s Afraid of Virginia Woolf for the Theatre Royal, Bath and a myriad of acclaimed productions in between.

This West End show gets my top rating 10/10 as it ticks all the boxes of how a theatre should be:
– The script is classic, witty and universally appealing.

– Actors and actresses are perfect for the roles they have been chosen for and I don’t only refer to David Suchet’s stellar performance but to all other characters including Algernon’s butler who only appears in the first act.

– The cast’s great energy transpires and you can tell they enjoy working on this play. In David Suchet’s own words: ‘We’re having tremendous fun with the play and look forward to sharing this with cinema audiences too.’

– It’s a great idea to broadcast the play across the UK via cinemas as this gives the opportunities to people everywhere to enjoy this piece of wonderful classic literature which all teenagers and their parents should know (read and see live ideally too).

– This particular production brings back the pleasure of going to the theatre that is often wrongly replaced by special effects movies and excessive isolating video-games. Going to the theatre is a social activity which is extremely educational and should be encouraged in young people.

The Importance Of Being Earnest in UK & Irish Cinemas LIVE by satellite from London’s Vaudeville Theatre:

Participating cinemas include Cineworld, Empire, Everyman, Odeon, Showcase, Omniplex and Vue, plus independent venues across the UK and Ireland.

The play is at the Vaudeville theatre until 7 November 2015. For discounted tickets visit http://londonmumsmagazine.entstix.com/tickets/the-importance-of-being-earnest

This entry was posted on Tuesday, September 22nd, 2015 at 11:08 am and is filed under Attractions. You can follow any responses to this entry through the RSS 2.0 feed. Both comments and pings are currently closed.