Last night I attended one of the coolest shows in the West End right now, Elements of Freestyle, created by the Netherlands’ ISH Dance Collective and hosted at the Peacock Theatre / Sadler’s Wells. Elements of Freestyle is an adrenaline-fuelled explosion of extreme urban sports, breath-taking dance, music and theatre. It’s a must-see show suitable for the whole family. The artists performing are at the top of their game both physically and creatively. They skate, rollerblade, breakdance and even football/ basketball skills within the show. In a spectacular fusion of breakdance, inline skating, skateboarding, freestyle basketball, BMX and free running, the audience discovers the artistry behind the trick. 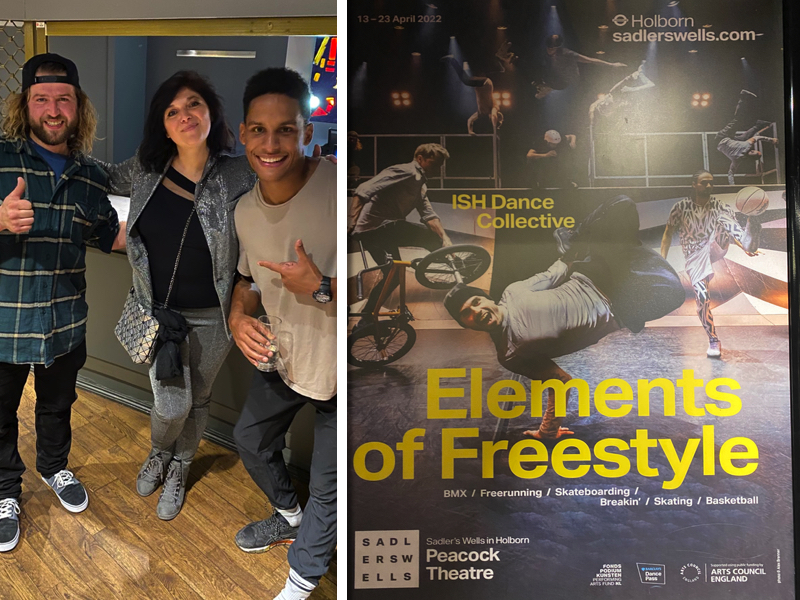 The Breakdancers reminded me of the guys I used to see on the streets in the ‘80s and that same urban street male culture but taken to a new level of perfection. Think Cirque du Soleil meets street dancing. It’s all coming together without any need for elaborate sets. It’s interesting that the dancers and skaters were all male dancing (the only two females were the live musicians – a cellist and a violinist), which is quite unusual. They are so in tune and in sync with the live music. The violin at times sounds like a heavy metal electric guitar. At the after-show party, I was told that the music chosen for the show has been especially written by them for them, specifically heavy on the bass with a very powerful rhythm.
These guys are at their physical prowess capable of beautiful movements in harmony. While one balances on one hand, his torso horizontal and legs folded, behind him, two roller skaters head for a steep ramp, and another one balances a football on his toes, and a trick cyclist stands on one wheel of a bike. Simultaneously three dancers balance on the top of the ramp. The show is intense and very energetic. 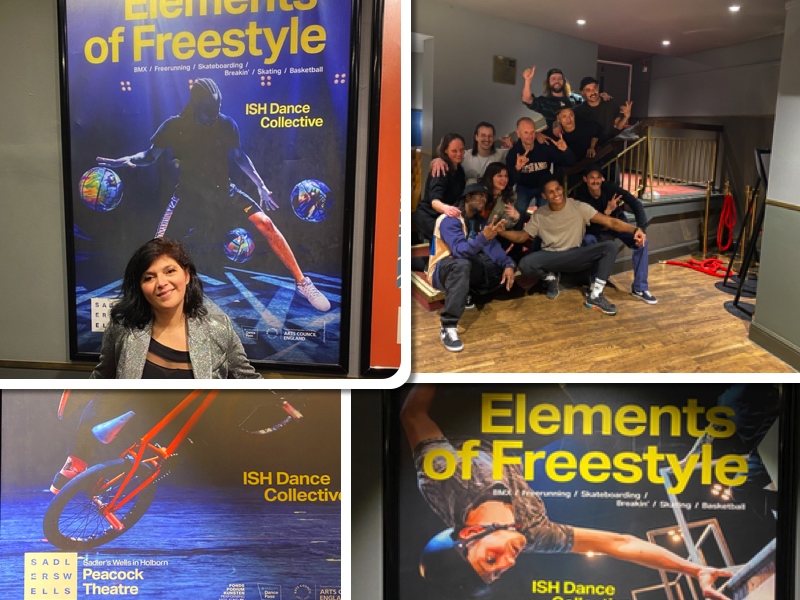 The whole scenography looks like a skate park – an environment that you would normally associate with a deprived urban environment. The choreographer managed to distil the best art form that comes from that and turned it into an excellent performance.
Elements of Freestyle is about those redeeming seconds that make a complicated trick ultimately succeed; the freestylers’ total focus on the moment, the ecstasy and the feeling of complete and total freedom.

Over Easter weekend children and their families are invited to take part in Family Weekend. This is a jam-packed festival including exciting performances and activities. balletLORENT present a new Sadler’s Wells Co-Production The Lost Happy Endings. Xenia Aidonopoulou and Georgia Tegou bring their new multi-sensory dance theatre piece Underwater, for babies aged 0 to 24 months. Children can also get involved in activities including workshops, games and arts and crafts.

The Lost Happy Endings features 18 famous fairy-tale characters including Snow White, Pinocchio, Cinderella and Goldilocks. The engaging new production takes audiences deep into the forest to meet Jub, a fearless girl with six fingers on each hand, who has been tasked with guarding all the happy endings. But one day a Witch steals them, and at bedtime the stories are destroyed. As the Witch disappears with the stolen Happy Endings it is up to Jub to save the night, encountering many beloved fairy tale characters and woodland creatures in her quest. Packed with spirit, adventure and glorious surprises, this fantasy family show will delight generations both old and young.

Choreographer Liv Lorent established balletLORENT in 1993. She enjoys working with performers with a range of ages and experiences. Dramaturg Ben Crompton is an actor, writer and stand-up comedian. He was a regular in several TV shows including HBO’s Game of Thrones. Scenario Writer Carol Ann Duffy has written for both children and adults, and her poetry has received many awards. She was also the scenario writer for balletLORENT’s Rapunzel, Snow White and Rumpelstiltskin.

Narrator Joanna Lumley OBE is a multi-BAFTA award-winning actress best known for her role as Patsy Stone in Absolutely Fabulous. The show has an original score composed by Murray Gold, who composed the famous music for Doctor Who. He has also collaborated with balletLORENT for Rapunzel, Snow White and Rumpelstiltskin. Set Designer Neil Murray is an award-winning theatre designer. He is Associate Director/Designer at Dundee Rep and Northern Stage. He has won an Evening Standard Award, two Critic’s Circle Awards and was nominated for an Olivier Award for Best Design for Brief Encounter.

Costume Designer Nasir Mazhar is a British fashion designer. In 2012 he designed the headwear for the opening ceremony of the UK Summer Olympics. Lighting Designer Malcolm Rippeth has been working with balletLORENT since 2002, lighting productions including Rumpelstiltskin, Snow White, Rapunzel, After Dark, The Night Ball, and Love Struck.

Underwater is a new multi-sensory dance theatre piece for babies aged 0 to 24 months, created by mothers and artists Xenia Aidonopoulou and Georgia Tegou. Seated on Family Islands, babies and their grown-ups are taken on a magical journey into the deep blue sea. The show vividly brings to life the journey of a ballerina as she wakes from a dreamy sleep and finds herself in the ocean, a comforting world of blue lights and bubbles. As she explores her gorgeous new home, she meets an octopus and the pair quickly form a loving friendship beneath the waves, dancing a duet to a twinkling soundtrack that features some familiar melodies.

This multi-sensory show engages and stimulates the imagination of babies and there’s plenty for adults to enjoy too. A series of online workshops for babies and grown-ups will accompany the performance.

Co-director Xenia Aidonopoulou is a dance dramaturg, creative consultant and director who has worked extensively in Greece. She is a keen observer intrigued by what cannot be verbally described. As a director she is interested in challenging boundaries between theatre and dance, creating narratives that reflect the human experience.

Co-director Georgia Tegou is a choreographer, creative director and performer. She approaches ‘dance-as-design.’, using physical motion to depict aspects of the human condition. Her performances and installations are created through collaborative processes resulting in experiences that blend contemporary dance, visual physical theatre and performance art.

This performance contains haze and lighting effects. Suitable for ages five and above.

This entry was posted on Thursday, April 14th, 2022 at 1:00 pm and is filed under Attractions. You can follow any responses to this entry through the RSS 2.0 feed. You can skip to the end and leave a response. Pinging is currently not allowed.