West End review: Bat Out of Hell – The Musical

Jim Steinman’s Bat Out Of Hell – The Musical is a romantic adventure about rebellious youth and passionate love, set against the backdrop of a post-cataclysmic city adrift from the mainland.  It gets the full 5 out of 5 stars from me. I personally loved everything about this musical: the compelling dystopian story, the rock music by Meat Loaf, the performances, the choreography and the special effects. It’s a shame it ends in January 2019 because I would have happily gone back to see it again. Read my full verdict here.

Bat Out of Hell is part musical and part gig. Meat Loaf’s songs are energetic and well performed by all artists. Unsurprisingly when you have great original music, the show cannot be bad. The special effects are contemporary mixing digital projections, visible video cameras, laser lighting and various traditional props like a Cadillac, Harley Davidson and glitter shots. I enjoyed the contemporary feel created by the live cameras on stage that projected some of the close action on a big screen turned towards the audience.
The references to Peter Pan’s Neverland story are clear. The Lost is a tribe of young people eternally frozen at the age of 18. The character of Tink reminds of Tinkerbell. On the other hand there are also references to West Side Story / Romeo and Juliet in the love story between Strat, a rocker biker and Raven, a rich girl whose parents hide her in a high tower.

Meat Loaf’s 43m-selling album Bat Out of Hell is full on both in the songs and in the involvement of motorbikes that reminds us to the cover art of the first Bat Out of Hell album. 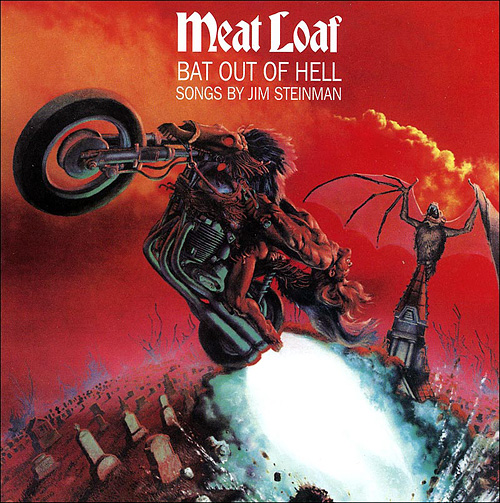 One of the coolest characteristics of Steinman’s songwriting is to choose a phrase from everyday slang such as Bat Out of Hell, You Took the Words Right Out of My Mouth that turns out to be so creative in the contest of this musical. Bat Out Of Hell became one of the best-selling albums in history, selling over 50 million copies worldwide.  16 years later, Steinman scored again with Bat Out Of Hell II: Back Into Hell, which contained the massive hit I Would Do Anything For Love (But I Won’t Do That).

For the stage musical, the legendary and award-winning Jim Steinman has incorporated iconic songs from the Bat Out Of Hell albums, including You Took The Words Right Out Of My Mouth, Bat Out Of Hell, I Would Do Anything For Love (But I Won’t Do That) and Two Out Of Three Ain’t Bad, as well as two previously unreleased songs, What Part of My Body Hurts the Most and Not Allowed to Love.

This musical is a great example of how rock music can be visually showcased with the aid of a compelling storyline, thrilling effects and effective use of technology on a stage.

The cast of Bat Out Of Hell – The Musical at the Dominion Theatre is led by Jordan Luke Gage as Strat and Christina Bennington as Raven, with Rob Fowler as Falco and Sharon Sexton as Sloane.  Also starring are Alex Thomas-Smith as Tink, Danielle Steers as Zahara, Wayne Robinson as Jagwire, Giovanni Spanó as Ledoux and Ryan Andersonas Blake.

Bat Out of Hell is still on for a few weeks. I would not miss it for the world. The Dominion production is currently booking until 5 January, 2019.

In the cafe’ at the bar you can jump on the famous motorbike from Meat Loaf’s album!

Just a final warning for parents of young children: this show is not suitable for children younger than 15 due to sexual references.

This entry was posted on Thursday, December 20th, 2018 at 10:53 am and is filed under Attractions. You can follow any responses to this entry through the RSS 2.0 feed. Both comments and pings are currently closed.