West End play: THE SCARECROWS’ WEDDING based on the book by Julia Donaldson and Axel Scheffler

Diego (9) and I went to watch a new Summer play based on THE SCARECROWS’ WEDDING book by Julia Donaldson and Axel Scheffler and were not disappointed. At the end of the show we even met the illustrator who wrote a lovely dedication on our book, which we have read and treasured for many years. Call me childish or infantile, but I totally loved the way the story was brought to life by just three talented actors. 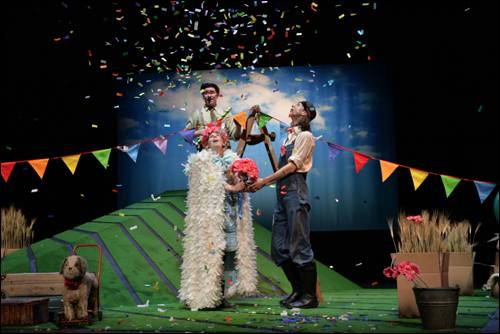 The Scarecrows’ Wedding show is a a truly heart-warming adaptation of a book that will probably surpass The Gruffalo in terms of success among children.

The story is simple like all Julia Donaldson’s books, but yet told in such a way that it becomes memorable. Words can be powerful and Julia can certainly use them wisely. Betty O’Barley and Harry O’Hay are excellent scarecrows (they scare a lot of crows). Harry loves Betty, and Betty loves Harry – so they decide to get married. Harry sets off to search for their wedding day essentials including a dress of feathers, a bunch of flowers and a necklace made from shells. However, when the farmer notices he is missing a scarecrow, he replaces Harry with the devilishly smooth but dangerous Reginald Rake. Dashing, daring and ever so cool, can Reginald persuade Betty that he is the scarecrow for her? Will Harry make it back in the nick of time before Reginald ruins their special day? 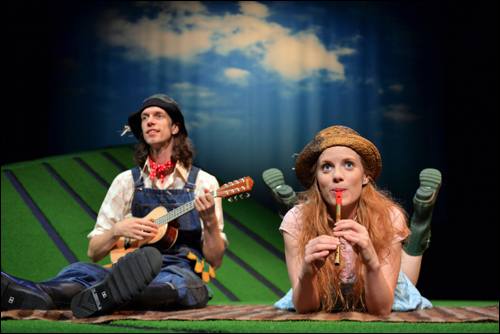 The set was beautiful and colourful. The simplicity of the decorations and the sound effects as well as the live music played and sung by three very talented artists appealed to both children in the audience and their parents. The participation of the audience was not as prominent as in other plays based on Donaldson’s stories like Stick Man and the Gruffalo, but still very engaging.

This show is suitable for kids aged 3+ but Diego also enjoyed it despite being 9. I guess if you as a parent can make reading picture books a pleasant experience for your children they grow up enjoying any sort of storytelling including theatre adaptations. Diego now enjoys looking how a simple story can be transformed in to a play with suitable props. He felt inspired to re-create some of the creative sound effects for the various animals (toad, frog, bird, dog) as well as landscape and water effects. He might use some ideas for his next art and DT (design and technology) project at school. 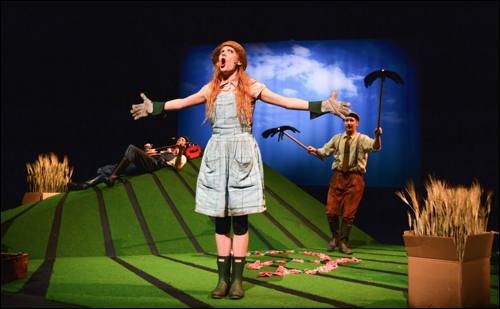 The Scarecrows’ Wedding is directed by Eva Sampson, with design by James Button, lighting by Elanor Higgins and music and lyrics by Darren Clark. It is produced by Scamp Theatre in association with Watford Palace Theatre.

The cast features Matthew Hamper as Harry O’Hay, Lucy Wells as Betty O’Barley and Michael Palmer as The Farmer and Reginald Rake.

The Scarecrows’ Wedding play will be at the LEICESTER SQUARE THEATRE (6 Leicester Place, London WC2H 7BX) from until SUNDAY 4 SEPTEMBER 2016. Don’t miss it for the world! 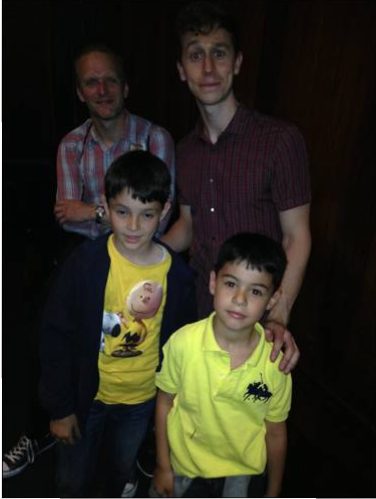 Diego and his friend meet the actors from the play

The author of The Scarecrows’ Wedding

You are probably very familiar with Julia Donaldson already. But let me tell you a bit about this wonderful British writer, playwright and performer, the Children’s Laureate 2011-2013 and prize-winning author of some of the world’s most-loved children’s books, most notably the modern classic The Gruffalo which has sold over 5 million copies worldwide. Julia is best known for her popular rhyming stories for children, especially those illustrated by Axel Scheffler, which include The Scarecrows Wedding, The Gruffalo, Room on the Broom, Stick Man and Tiddler and other Terrific Tales. Their books have sold millions of copies and have been translated into 40 languages. Julia also received an MBE in 2011 for her services to Literature. Julia divides her time between Scotland and West Sussex where she lives with her husband, Malcolm. 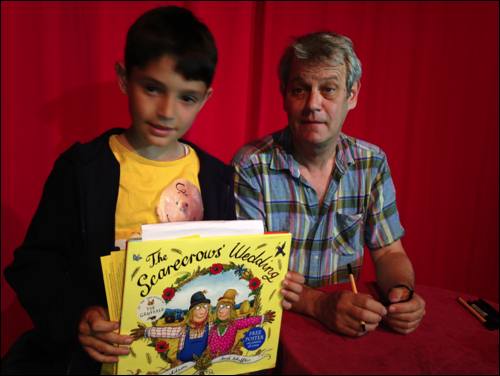 Diego with Axel Scheffller after the book signing

Watch this clip of Julia Donaldson singing The Further Adventures of the Owl and the Pussycat with her husband Malcolm.

This entry was posted on Thursday, July 21st, 2016 at 11:05 am and is filed under Attractions. You can follow any responses to this entry through the RSS 2.0 feed. Both comments and pings are currently closed.