In seven months I have had two fun chats with single dad Simon Bartholomew, the undisputed Funk Guitar master and member of multi-platinum UK soul legends The Brand New Heavies. We covered so many topics including single parenting life in isolation, home-schooling during lockdown, his new 30th Anniversary Funk EP going back to the band’s roots and his upcoming live gig in Global Stream from Jazz Cafe London on Valentine’s day (Sunday 14 February 20:00 UK, 21:00 CET, 15:00 EST – Tickets £20 available from www.streamzy.co.uk and the Jazz Cafe London website). 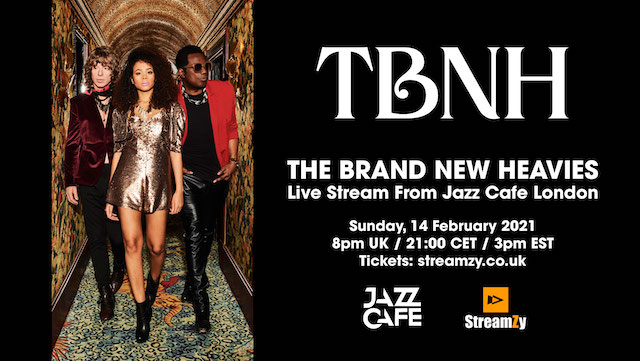 For the first time ever, and in their first performance since last year’s lockdown, The Brand New Heavies, led by Andrew Levy and Simon Bartholomew and featuring stunning vocalist Angela Ricci, take to the stage on Valentine’s Day to stream live to their worldwide fans and lovers of stylish, good-time grooves direct from London’s Jazz Café on Sunday 14th February at 8.00pm UK time. Get ready for some of the best in-close-up funk and soul right in your home! 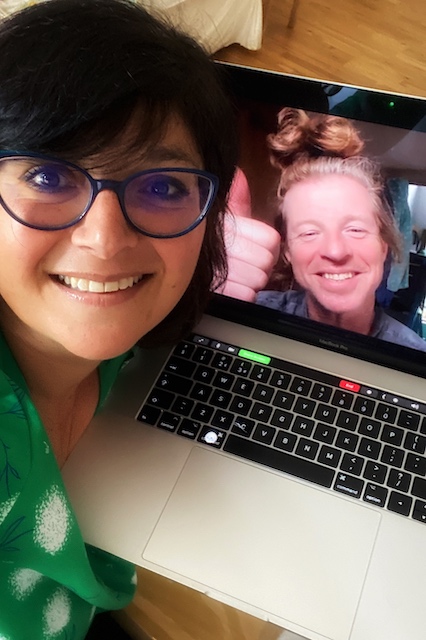 Monica Costa and Simon Bartholomew chatting on Zoom during the pandemic

Because the gig takes place on Valentine’s Day I had to ask Simon what love means for him. And he gave me a beautiful visual metaphor: “Love is the big elusive butterfly, so hard to catch, but easy to loose”. To this melancholic meaning of love I added that we need to create a beautiful garden for our butterfly, and make it appealing enough for her to stay there forever and not fly away. Simon loved it because deep inside he still believes in true love even if the rock ‘n’ roll lifestyle has often damaged long lasting relationships. 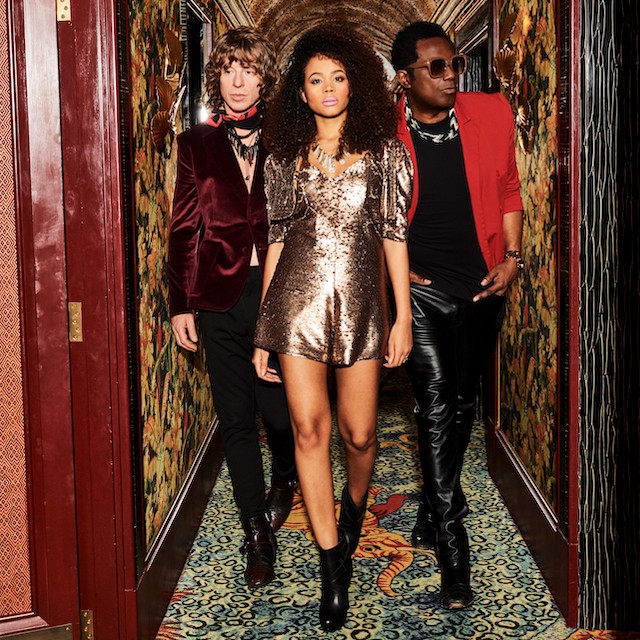 Can it really be over thirty years since The Brand New Heavies’ debut album first strutted its way into the public eye with a winning funky formula that would go on to earn them sixteen Top 40 hits and three million worldwide album sales, not to mention two UK Platinum albums? Emerging at the heart of the Acid Jazz scene, they made an instant impact with audiences on both sides of the Atlantic, and over the last three decades the band have not let up releasing enduring classics such as ‘Never Stop’.  ‘You Are The Universe’, ‘Midnight At The Oasis’ and ‘Dream Come True’. 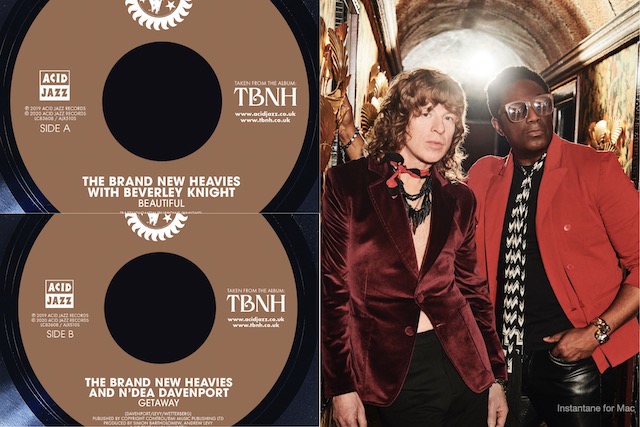 To celebrate these 30 years, during the pandemic The Brand New Heavies have released a limited edition 7-inch vinyl, the first 7-inch since Stay This Way came out in 1992. The 7-inch contains the vocal performances of both Beverley Knight and N’Dea Davenport on Beautiful and Getaway respectively and as well as this they’ve put together a digital only extended player featured unreleased tracks from TBNH plus some wonderful ‘club ready’ remixes.

Not only that but The Brand New Heavies have unleashed a new digital EP The Funk going back to their roots with three tracks recorded at the sessions for the TBNH album. 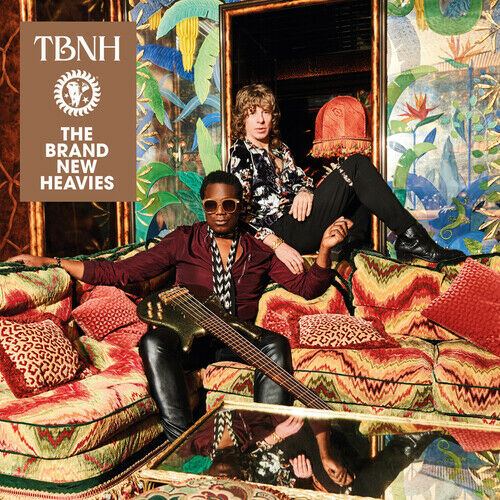 I don’t think I have ever laughed so much during online interviews before. Simon Bartholomew, co-founder of The Brand New Heavies, is the funniest and most charming musician on the planet. Not only he seems to be the one who keeps up the mood within the band, but even discussing parenting he jokes around. Such a lovely guy!

Q: How have you spent your lockdown?

Simon: I’ve been writing music and done media interviews. It’s been a nice time to think about life without having to be somewhere all the time, without hectic schedules and hard deadlines. I am a single dad with two kids (8 and 10) with me 50% of the time. I’m self-employed, so I either work at home or I’m on the road with the band. I’m working very hard all the time. I have had the kids a lot during the lockdown and handling their routine was intense. You make breakfast. Then you wash up. You do some home-schooling and then, with two kids, it’s pretty much lunchtime and outdoor entertainment. In no time it’s dinner again. By the end of the week, it’s really tiring.

Q: What have you missed the most during lockdown?

Simon: I missed going to the pub down the road and have a beer and a chat or just sit around other people. It’s the simplest things, at the end of the day, that I missed the most. I got quite depressed one week and I didn’t see anyone on the screen either. I was getting on with work at my house and I was always busy, but it’s just the not being near other people that upset me. It’s not really natural. I’ve missed the shows and live concerts.

Monica: we needed some sort of going back to basics to start realising and appreciating important things such as meeting people in the park, playing the guitar with friends and doing stuff that we’ve given for granted. Now we’re starting appreciating the basics again, like when we used to live in the Seventies and Eighties when we just didn’t have phones.

Q: What inspires your music writing?

Simon: I write songs in many different ways. Sometimes I get together with the band and just jam as a funky group. It doesn’t always start with the lyrics. Other times you might write something on your own and bring it to the band. Everyone plays their style on it. What you find is instead of getting someone else to arrange the songs, you just take your songs to the band and jam together.

Our fans’ feedback from fans is very positive. Most of them said that our songs have helped them get through really tough times. Our classic songs are especially uplifting as Funk can be. Our general energy or message is one of positivity.

Q: What is your favourite song of all the tracks you’ve written?

Simon: I’m going to ask you that question when you’ve written like 30 songs. Cause it’s very hard to say.

Q: Fair enough. I take that, but there must be a song that audiences always like more.

Simon: I see a gig as a show. We will slow the pace down and build it up again. It’s like going to the theatre. You need the whole play to tell the full story. What’s your favourite bit of a book? You know what? Let’s take the rest of the book out and just read that chapter.

Q: How has the music scene changed for you over your 30 years career?

Simon: The early days of the Nineties had been a time of the big record deal. Then you used to tour to sell a record, but now you tour to make money, and the record is there to get you on the road.

It’s good to see all these big record companies rendered powerless now, because once upon a time they controlled everything. Now anyone can put a record out and get a deal, if they’re good.

These days if you have GarageBand on your computer, you can make a record in five minutes, and anyone can write words down. So, it’s a revolution in that way. There’s so much stuff out there now.

We reached the peak of our popularity with our album ‘Brother Sister’, released in 1994, along with ‘Shelter’, our 1997 release. We did not want to be cool or sound like American funk acts at that time. Our priority was to come up with true Funk. I want to believe that we did that.

Three decades after it all started, I believe that we are not only in our best shape again, but with this new album entitled ‘TBNH’, we are getting ready for our ‘The Funk is Back’ tour which will hopefully commence soon.

Tickets £20 available from www.streamzy.co.uk and the Jazz Cafe website.

My first interview with Simon was published in the Summer issue of the London Mums magazine. 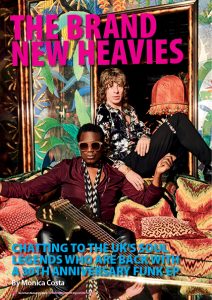 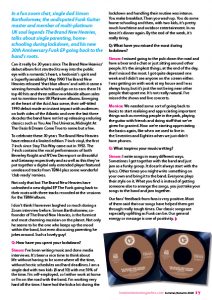 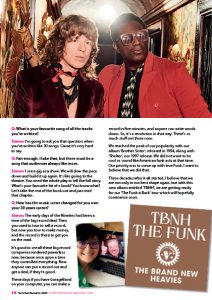 This entry was posted on Monday, February 8th, 2021 at 2:49 pm and is filed under Attractions. You can follow any responses to this entry through the RSS 2.0 feed. You can skip to the end and leave a response. Pinging is currently not allowed.