If you’re after an evening of entertainment and laughter (especially on a hump day), look no further…

We arrived in good time at West Brompton for the casual and colourful Underbelly festival starting off with an outdoor gin tasting masterclass followed by a bite to eat from the onsite vendors and ending the evening with the much talked about show: Unfortunate: The Untold Story of Ursula the Sea Witch ….here’s our take on the experience: 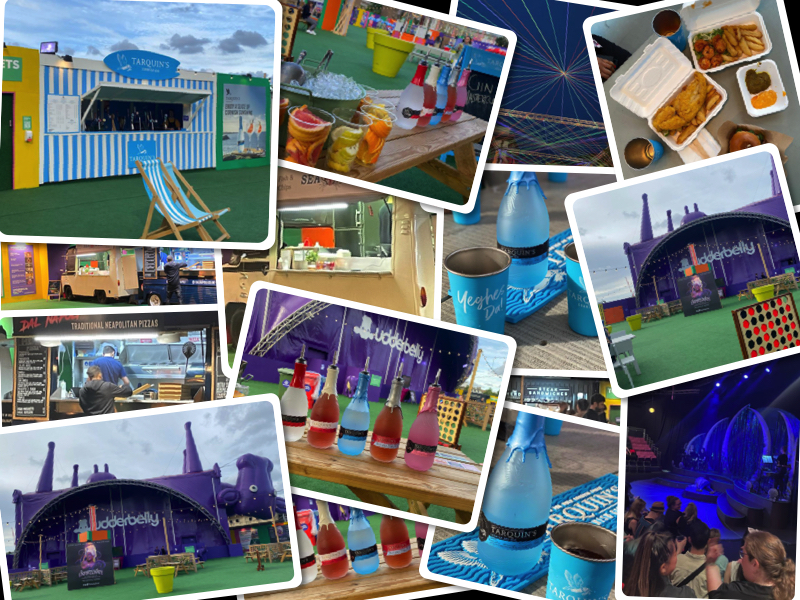 We were greeted on arrival with the famous original Cornish gin mixed with tonic and fragranced with thyme, served in the famous turquoise blue Tarquin metal cup. This set the scene to learn about the history of Gin as well as learning interesting facts about the famous and award winning Cornish gin and the founder, Tarquin Leadbetter.

Following a brief history on how Tarquin’s Cornish gin came about, we were served several generous shots of gin from their exquisite collection of five different flavours. The winner for us was The Cornish Sunshine blood orange gin which we can only describe as “the feeling of summer in a glass”.

All their gins were really well balanced, with a good mouthfeel and wonderful and unusual botanicals. They are bottled by hand and wax sealed.

Did it meet expectations…. Hmmmm not entirely. Whilst we felt a connection with the history and learnt some interesting facts (did you know each bottle was hand signed by Tarquin’s mum!), we were hoping to learn about which pairings would be good for each type of gin. Instead, they were served neat (not that we’re complaining).

There are 3 food vans dotted around the venue and we had to try all of them:

Sea Wise came up trumps. The lightly battered cod, chunky cut chips were authentic which brought back a fresh feeling of being near the seaside. We also tried their famous prawns in their special bang bang prawns. I would 100% recommend this. This place honestly serves the best curry sauce we have ever tasted – it’s not your usual cheap packet sauces that you would find in your local chippy oh no! There’s some serious concoction in the flavours which is a must for any curry sauce lovers out there.

We ordered the Margherita Pizza from Dal Napoli and a Tiramisu. The pizzas were made in a wood-fired pizza oven in Neapolitan style exactly as it would be on the streets of Naples. If you are looking for a cheesy, comforting pizza look no further. To wrap it up, we had the tiramisu which was a creamy deliciousness.

Herd – this could have been better, the seasoned fries were decent however the classic steak sandwich was served a little cold.

As far as drinking goes, the venue boasts an al-fresco Tarquin’s Cornish gin bar, alongside Mardi’s beer bar which provides various types of beer and other beverages.

Unfortunate: The Untold Story of Ursula the Sea Witch

This show was the star of the evening! Who is the woman behind the tentacles? Whilst this musical takes inspiration from the Disney’s Little Mermaid, this is definitely a show not aimed at children with many comical sexual references and innuendos. There are all sorts of surprises for us when we’re introduced to Ursula’s world.

The actors are incredibly talented, all playing more than 1 role, and the songs are catchy, full of fun and often come with just the slightest of nods to the film that inspired it all.

This musical is undoubtedly hilarious and entertaining and thought provoking, which is apt for today’s world, challenging us to think differently about body image and judgement of others.

This show began at the Edinburgh Fringe. With a stellar cast, very comedic script and excellently presented songs, the Fat Rascal Team have done a superb job of turning this limited Fringe show into a full two hour production.

– Arrive as early as you can. The venue is filled with giant Jenga and Connect 4
– You cannot take any food in the show – order early as queues will take up time
– The only place serving desserts is Dal Napoli
– The 20 mins interval of the show may not give you enough time to eat and head back in… so order before the show ready to be collected in the interval.
– Curry sauce from SeaWise is a must
More info at www.underbellyfestival.com/

Tags:  #Streetfood #tarqingin #udderbelly #underbelly festival
This entry was posted on Thursday, July 7th, 2022 at 12:12 pm and is filed under Attractions. You can follow any responses to this entry through the RSS 2.0 feed. Both comments and pings are currently closed.