On the first weekend of 2018 London hosts the first quality antiques fair of the new year, The Mayfair Antiques & Fine Art Fair. The event that is certainly appealing to anyone who loves vintage items and antiques will open its doors for the 6th consecutive year at the five star London Marriott Hotel Grosvenor Square, London W1K 6JP from Thursday 4 to Sunday 7 January 2018 with the support of Wetherell, Bold & Reeves, The Clubhouse, and NFU Mutual Godalming. 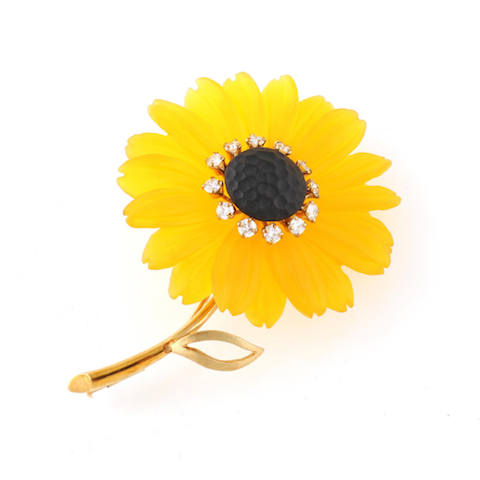 Organised by The Antiques Dealers Fair Limited, this prestigious boutique event brings together some 40 expert dealers, mainly members of BADA or LAPADA The Association of Art & Antiques Dealers. This popular fair had people jetting in from abroad from the start and continues to woo collectors, interior decorators, the trade, Londoners and visitors to the capital at the end of the festive season.

At the beginning of each year, the ballroom area of the London Marriott Hotel Grosvenor Square becomes a cornucopia of eclectic items for interiors and more.

Atelier Limited has a fine selection of paintings, including a mid-18th century Roman School Old Master oil on canvas of The Goddess Diana, depicted as the huntress in a woodland setting, the moon adorning her hair with two faithful hounds beside her. The oil on canvas has an English 18th century, carved and gilded frame, and is priced at £20,000. Atelier has gained a reputation for offering views of London that reveal its hidden past, but convey all its unique atmosphere. 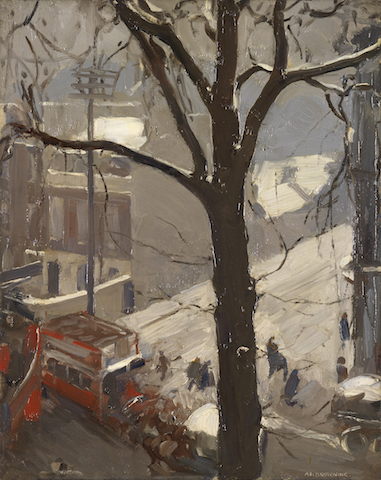 ATELIER Browing The Kings Road Chelsea in the snow The King’s Road, Chelsea in the Snow by Amy Katherine Browning RP, ROI, ARCA (1882-1978 ) oil on canvas Signed lower right ‘AK Browning’ Windsor & Newton canvas stamp Circa 1916 20″ x 16″ £6,500 from Atelier Limited This a bird’s eye view of the junction of King’s Road and Glebe Place, Chelsea showing the group of 18th century houses 213-217 King’s Road which are still there today. The picture is painted from the upper floor of a building on the site of the present Lightfoot Hall on the corner of the King’s Road and Manresa Road. At the time this was painted the house was used as a studio by Amy Katherine Browning and the painter Thomas Cantrell Dugdale (1880-1952). The couple married in 1916. Thomas Dugdale painted this same view on a warmer day with the tree in full leaf and an open topped bus passing beneath the window. That painting is in the Museum of London and was the key to identifying exactly where this picture had been painted.

To this end, Atelier is launching The London List, a quarterly catalogue offering original oil paintings, watercolours and etchings of the different aspects of the 610 square miles of Greater London, some of which will be shown at The Mayfair Antiques & Fine Art Fair, including Whistler etchings. Paul Mayhew Fine Art is returning to exhibit, after a two year gap. Pride of place on the stand will be Venetian Festival, widely regarded as one of Sir William Russell Flint’s best watercolours, priced at £99,000. 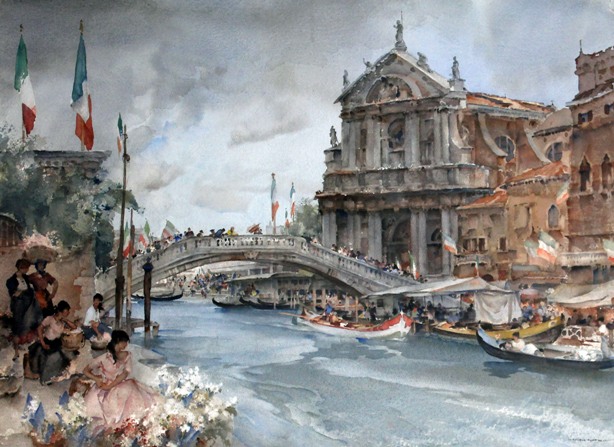 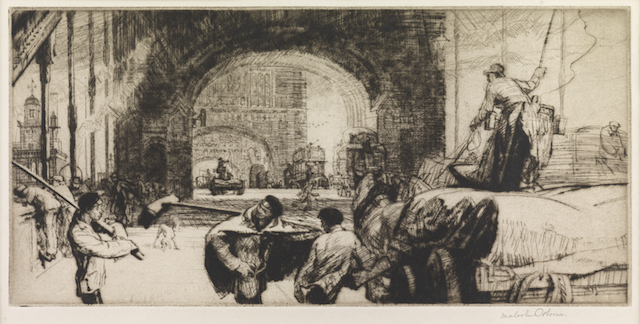 Jewellery from different eras includes a pretty 19th century English tiara with over 20 carats of old mine cut diamonds, with a ticket price of £25,000, from Anthea AG Antiques’ stand, along with pieces from Boucheron, Van Cleef & Arpels, and Pomellato. T Robert has an exceptional 18ct gold enamel and diamond pierced trellis brooch, attributed to Falize, French, c.1900, £4,850 and a rare platinum square cut diamond and emerald ring watch made by Eszeha, the forerunner of Chopard, c.1910, £5,850. An extraordinary fine jewellery art piece: a bow clip in 18ct gold with tourmaline and a large amatrine, was worn by a member of the Andy Warhol set. Signed by Depy Chandris, from the Greek shipping family, it was made in the late 1960s and is priced at £8,750 from Wimpole Antiques. Wimpole Antiques also has a fine collection of jewellery by Oscar Heyman, known as the “jewelers’ jeweler” and the subject of a book of that name by the Museum of Fine Arts in Boston. 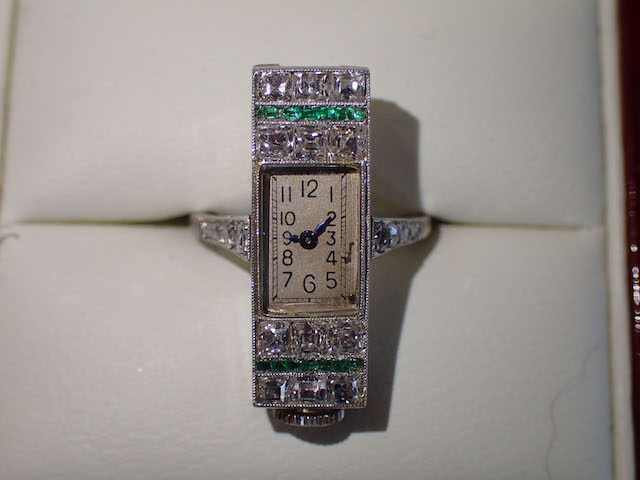 Newcomer, Precious Flora is the brainchild of Cornelia Perquin, who has over 30 years’ expertise with antique jewellery. Based in Antwerp, where she works as a certified appraiser for museums and private collectors, Cornelia has amassed a considerable collection of valuable flowers, foliage, fruit and nuts, some from well known names like Cartier. She cleverly displays them as if a prized exhibit at an RHS show, each in its own little flowerpot. Descriptive labels come complete with the common and Latin names of each plant. Another European first time exhibitor is Galerie Buter from Paris, selling carpets, rugs and unusual objets d’art, including a late 19th century Iranian wool rug and a 19th century Chinese red coral carving, POA. 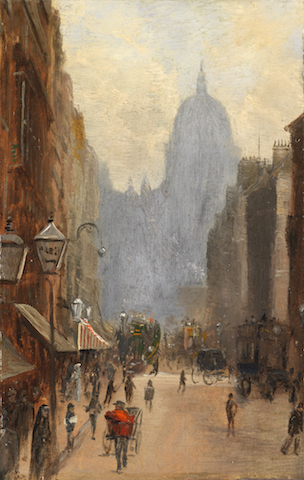 ATELIER Hyde Pownall Fleet Street Fleet Street, London by George Hyde-Pownall (1876-1932) oil on board 9″ x 6″ signed on reverse “Geo Hyde P” and inscribed “Fleet Street”. circa 1890 £5,000 from Atelier Limited Fleet Street has been associated with printing and publishing since the beginning of the 16th century and by the time that this picture was painted in 1890 most British national newspapers were based there. Much of the newspaper industry moved out in the 1980s but some of the former newspaper buildings and the pubs frequented by journalists have been preserved. The artist, George Hyde-Pownell is well known for his beautifully observed and evocative views of London and city life. In 1911 he emigrated Australia never to return.

Other first time exhibitors at the fair include Flying Colours Gallery, dealers in established and emerging contemporary British artists (painters and sculptors), with a good selection of Scottish art, including Lilies and Elephants by Jean Martin RSW (b.1947, Glasgow), mixed media, priced in the region of £8,000 and various bronzes of The Minstrels by Clare Trenchard (b.1956), small versions priced in the region of £5,000 to over six feet at around £25,000; Burlington selling fine 19th and 20th century British and European paintings. Collector turned full time dealer, Richard Hoppé Antiques brings his eclectic mix of antique perfume bottles, glass, tiles and ceramics and objets d’art, including a French Art Nouveau three tile polychrome tubeline panel featuring iris blooms and whiplash leaves on a yellow ground, c.1905, £525. There is also a chance to preview some of the fine oil paintings by Greek artist and idealist, Angelos (b. 1943), on the MaCa stand, in advance of Let there be light, a retrospective of Angelos’ work over the past 20 years, which opens in the Hellenic Centre in London’s Marylebone in April/May 2018. These sizeable works would make a statement on any interior, home or office wall.

Amongst the silver on Mary Cooke Antiques’ stand is a very unusual George III rococo revival silver coffee pot by William Nolan of Dublin, dated 1817 and priced at £5,000. Stephen Kalms Antiques has a good selection of silver mugs, great as christening presents. One notable small tankard style mug is by Omar Ramsden, London, dated 1923 and selling for £2,650. There is also has an attractive micro-mosaic box of flowers with diamonds set in Swiss gold, c.1810, £9,200.

Provenance often sheds light on the previous life of an antique, sometimes adding value and confirming authenticity. Hickmet Fine Arts has three Lorenzl cold painted bronzes from the 1930s that were part of racy romance novelist, Jackie Collins’ collection, bought in the 1970s and 1980s. A letter from a family member of Paul and Emile Nicholas explains that a monumental brown and orange Paul Nicolas cameo vase, c1925, was a gift from Paul to his brother Emile, who was secretary to the Ecole de Nancy. At approx. 13″ tall, it is signed D’Argental with an SL monogram and also marked Château de Tournoël in the cameo. It is for sale on M&D Moir’s stand for £2,500.

Glass in all shapes and sizes from chandeliers to paperweights and drinking vessels can be found on Fileman Antiques’ stand. Highlights include a fine pair of English silver plated and cut glass electroliers by F&C Osler, English, c.1900, £4,950 and an exceptional and highly unusual pair of Victorian opaque glass ormolu mounted decanters by Leuchars of 38 Piccadilly London, English, c.1880, £4,850 the pair. The opaque glass bodies are ormolu-mounted with fine swagged rope decoration with inserted enamel plaques depicting different scenes of wildlife by the waterside. 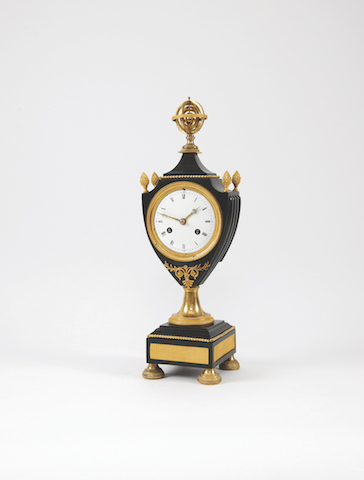 BBC Antiques Roadshow horological specialist, Richard Price, returns with his fine selection of clocks, including a very rare miniature porcelain mounted carriage timepiece of lantern form, dating from around 1880, £8,750 . The movement is signed A. Dumas no. 189, the dial signed Leroy & Fils, London, Paris and is decorated with cupids, the other seven panels painted with flowers against a turquoise ground, all with white beaded jewelling. The purpose of this design was to show the maximum number of panels, at which A. Dumas specialised. Other timepieces come in the form of vintage watches from high-end manufacturers including Rolex, Patek Philippe and Vacheron Constantin on the Timewise stand. This dealer also stocks military timepieces with particular emphasis on watches from the British and German armed forces. One of the few surviving Lemania series III chronographs, issued to Royal Navy nuclear submarine personnel between 1957 and 1970, is priced at £11,000. To ensure safety on board Royal Navy nuclear submarines, the level of radiation was constantly monitored by specialist radiation detection equipment. Since Geiger counter readings would be influenced by conventional military watches with their radioactive luminous tritium, the Royal Navy introduced the non luminous Lemania chronograph.

This entry was posted on Wednesday, January 3rd, 2018 at 3:36 pm and is filed under Attractions. You can follow any responses to this entry through the RSS 2.0 feed. Both comments and pings are currently closed.