London Mums are always on the hunt for Summer fun activities and Legoland does not disappoints even when it’s crowded. The sunshine makes everything perfect. The LEGOLAND® Windsor Resort has opened for its 2018 season with amazing new attractions including: iconic new landmarks in the world famous Miniland, an awesome digital LEGO® Reef, brand new NINJAGO themed hotel rooms; and an exclusive LEGO® NINJAGO® 4D movie. London Mums have taken a look and here are some of our personal highlights: 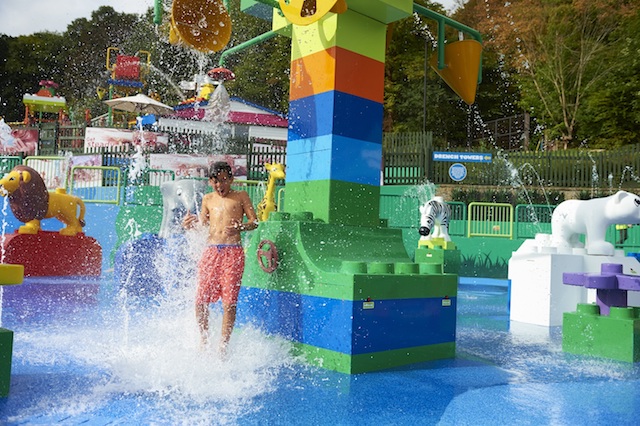 From 07 July– 02 September, the LEGOLAND® Windsor Resort will be hosting its first-ever ‘Summer of Fun’ event, set to thrill families throughout the school holidays. The two-month long event will invite guests to join an awesome Beach Party built just for kids, hosted at the resorts’s all-new 10m long sandy beach, with a host of beach activities for all the family to enjoy. Plus, the LEGOLAND Windsor Resort will be unveiling its first-ever giant sand sculpture. The 20 tonne creation will be sure to wow guests, who can watch the sculptor in action (07 – 10 July) as he builds the spectacle, before the final creation is revealed on 11 July. 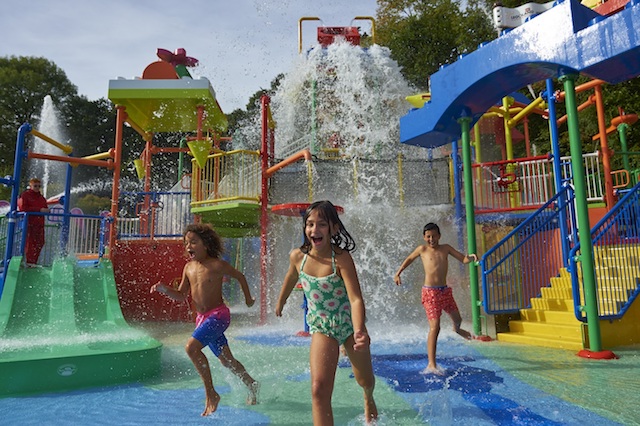 Little builders will be entertained with buckets and spades, LEGO building activities of underwater creatures and beach themed models, and POP music to dance along to with special guests LEGO Shark Guy and LEGO Sea Captain who will be stopping by to join the party. 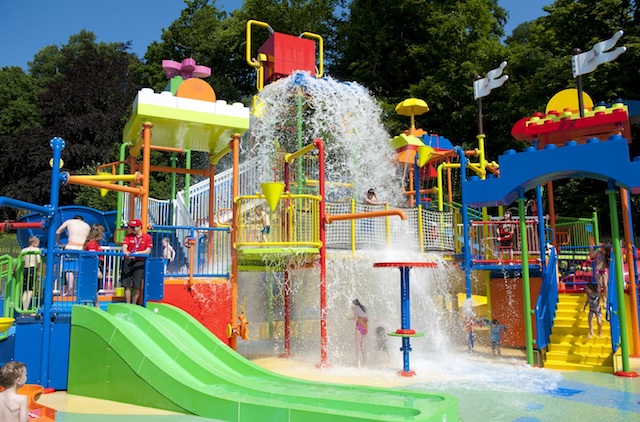 Families can kick-back in deckchairs or borrow a beach blanket and relax on the shores of LEGOLAND, before indulging in their favourite ice-cream from our ice-cream stand, whilst a giant deck chair will give the perfect picture opportunity.

After playing in the sand, little ones can continue the fun by cooling off at Splash Safari, and for the bigger builders we have Drench Towers, the UK’s largest outdoor water play structure complete with slides and the famous giant tipping DUPLO® brick. 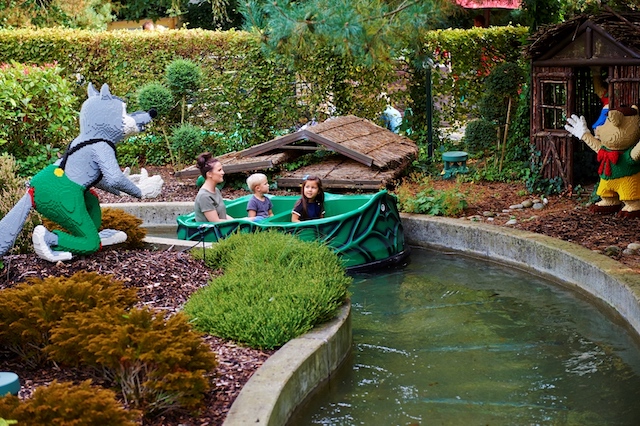 Brand new for this year, guests can enjoy iconic additions from across the globe, as Miniland includes landmarks from India, Russia, Australia, and China for the very first time.

Taking 55 LEGOLAND Model Makers more than 12,000 hours to build, families can now take in the sights at Miniland ‘Explore the World’, from the majestic 47,000 brick Taj Mahal (Agra) complete with a mini LEGO version of ‘Diana’s bench’, to the St. Basil’s Cathedral (Moscow) with its multi- coloured roof, spectacularly recreated with thirteen different colour LEGO bricks. The Forbidden City (Beijing) took a whopping 700 hours to design and build also joins the line-up, along with The Sydney Opera House (Sydney) made up of 204,000 bricks – the most bricks of all the new landmarks – and an impressive three-metre-long LEGO Sydney Harbour Bridge.

Miniland has been at the heart of the LEGOLAND® Windsor Resort since it opened in 1996. Now with twelve countries made from over 40 million bricks, allowing guests to stroll from the UK to Australia in under five minutes, it is better than ever before.

Little ones can now get a taste of the American dream, as a miniature LEGO version of the USA has arrived in Miniland. Iconic American landmarks recreated from hundreds of thousands of LEGO bricks make up the New York City skyline, with the Empire State Building standing at a huge 4.4 metres tall, and the world famous Statue of Liberty made from 44,000 perfectly matched ‘Yoda Green’ coloured LEGO bricks.

Guests can also enjoy an epic journey along the famous Route 66, taking in Chicago and Arizona, as well as LEGO recreations of San Francisco’s Golden Gate Bridge, Times Square, and The WhiteHouse. Eagle-eyed guests will spot tiny details along the way from Area 51 in Nevada to Cloud Gate in Chicago, as well as over 20 iconic yellow LEGO taxis made especially for New York City.

‘LEGO NINJAGO – Master of the 4th Dimension’ – an exciting new 12 minute, 4D film screening at the popular LEGO 4D Movie Theatre will delight NINJAGO fans big and small. Exclusive to LEGOLAND Parks worldwide, the 4D movie will see guests plunged into the action as Master Wu prepares Kai, Nya, Lloyd, Zane, Jay and Cole to take on the teachings of the mysterious ‘Scroll of the 4th Dimension’ complete with 4D effects including water, wind, fire and snow.

New LEGO NINJAGO® themed rooms are now open at the LEGOLAND Windsor Resort Hotel, giving guests the exciting chance to sleep like a ninja. The four new rooms, filled with bright LEGO NINJAGO wallpaper and LEGO models bring the awesome world of the LEGO NINJAGO heroes – Nya, Kai, Cole, Lloyd, Zane and Jay – spectacularly to life. With separate sleeping areas for two adults and up to three children, families can discover 10 new LEGO models in their room – from impressive LEGO throwing stars, to a magical hatching dragon made up of 2,852 LEGO bricks, and a bricktacular LEGO dragon’s egg. Wannabe ninjas will delight in solving the clues hidden around the room to unlock the LEGO surprise that waits in the LEGO safe. Plus, there’s a LEGO building station, two TVs, and a premium en-suite bathroom complete with more LEGO NINJAGO twists and flourishes.

The LEGO NINJAGO themed rooms are available to book from £135 per person per night for a family of four including breakfast and Park tickets for two days.

An awesome digital aquarium, LEGO Reef, also joins the line-up of exciting new attractions at the LEGOLAND® Windsor Resort for 2018. Families can dive deep under the sea and build colourful fish out of virtual LEGO bricks using touch screen technology.

Bursting with interactive fun, little ones can use touchscreens to create their very own personalised virtual LEGO fish using 15 different LEGO colours – including Clown Fish, Angler Fish, and Piranhas – before casting them off into the ocean and watching them swim through the interactive floor to ceiling coral reef. Guests can then ‘feed’ their hungry new LEGO creations at the press of a ‘feed me’button! What’s more, they are also able to explore their imagination and build LEGO starfish, crabs and submarines at the free building stations.

HOTELS AT THE LEGOLAND WINDSOR RESORT

With all of this and over 55 rides, live shows and attractions to enjoy at the LEGOLAND Windsor Resort, those who opt for a short break can stay at the unique LEGOLAND Hotel or the enchanting new LEGOLAND Castle Hotel located right on the edge of the park.

Stay in a brand new LEGO® NINJAGO® room or opt for a LEGO Friends, Pirates, Adventure, Kingdom, Knights or Wizards themed Room, all jam-packed with fun features and separate sleeping areas for children and adults. The Hotels are brimming with LEGO surprises, including the splash-tastic LEGO Pirates Splash Pool, full evening entertainment programme and even a smoke breathing LEGO Dragon as you enter the Park.

Kids Club: What to expect from Legoland Windsor

This entry was posted on Wednesday, July 11th, 2018 at 10:57 am and is filed under Attractions. You can follow any responses to this entry through the RSS 2.0 feed. Both comments and pings are currently closed.