Space Shifters exhibition review: Art like you have never seen before

The Hayward Gallery’s new exhibition Space Shifters is open from today until the 6th January 2019 and is an absolute MUST visit. The artwork represents works by 20 international and well-recognised artists such as Anish Kapoor, Yayoi Kusuma, Fred Eversley and Richard Wilson, who have brought to life the rooms in the gallery by using art to change or dislocate the visitor’s sense of space. 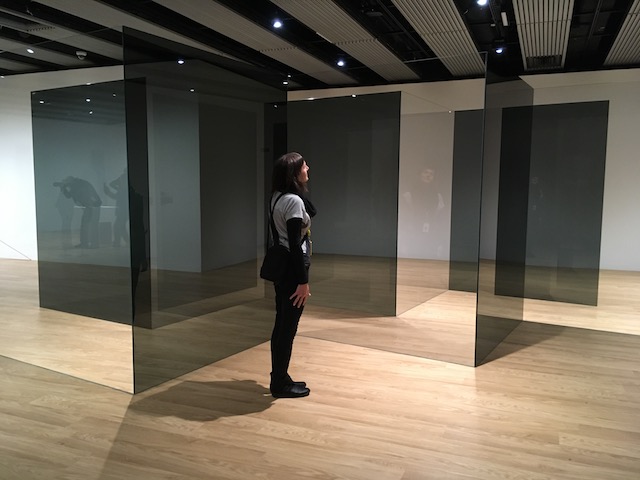 The masterpieces which I’ll remember for a while after visiting the gallery are many, but here I want to try and describe the ones that caught my eye most of all. The first piece is the one that most probably best describes the meaning of illusion and space shifting without much effort on one’s behalf. 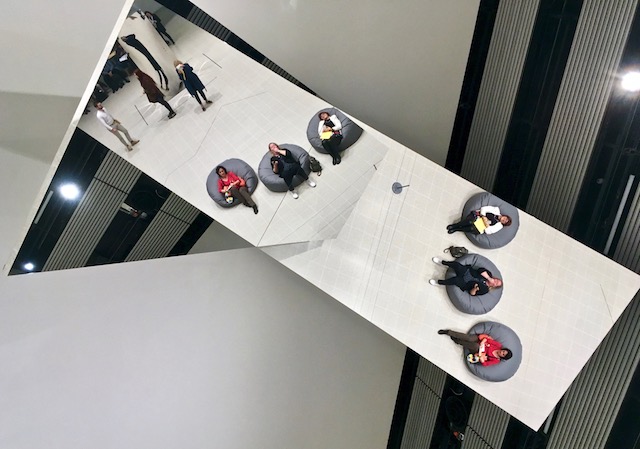 The view of a huge double mirror steel piece, which seems to float and turn in space made by Jeppe Hein. Looking at his artwork suspended in the air, lots of feelings and thoughts come across, especially those of feeling and thinking to yourself as being either inside or outside the artwork. By admiring the mirrors you are just not quite sure where you stand in life. I would say that this piece could be not only an illusion but also an enigmatic piece of art.

Fred Eversley’s untitled work is a large violet, amber and blue parabolic lens that draws you towards it using an innovative spinning casting process. 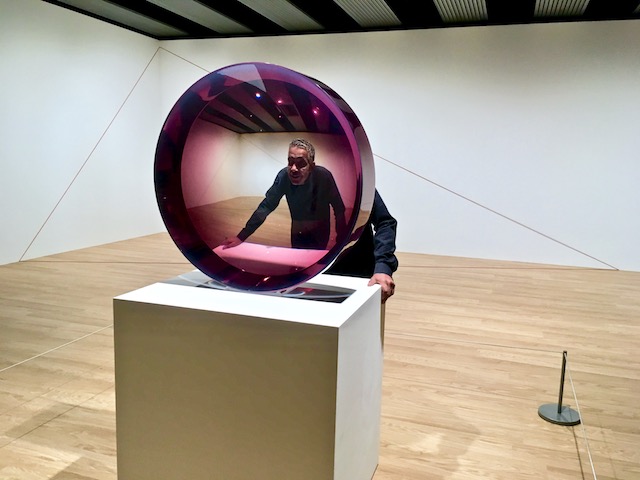 Thanks to a combination of lights and people movement, it brings the terms ‘fascinating’ and ‘speechless’ to another level. One must walk around this piece of work to try and get as much of a perspective as possible. Fred Eversley creates sensuous coloured lenses through which viewers can witness the world anew. He was there for the unveiling of the exhibition and it was great to take this photograph of him with his artwork.

Stepping into another of the gallery rooms you will find a vast number of stainless-steel spheres: this is the Narcissus Garden, by Yayoi Kusama. 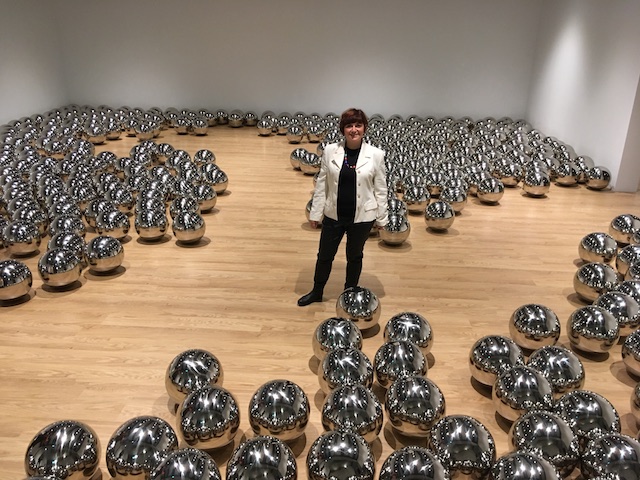 It’s not difficult to see why this work of art has the title it has, as you are literally surrounded by mirrored huge spheres and it’s very difficult to not be tempted to take a photo where you are not in it. 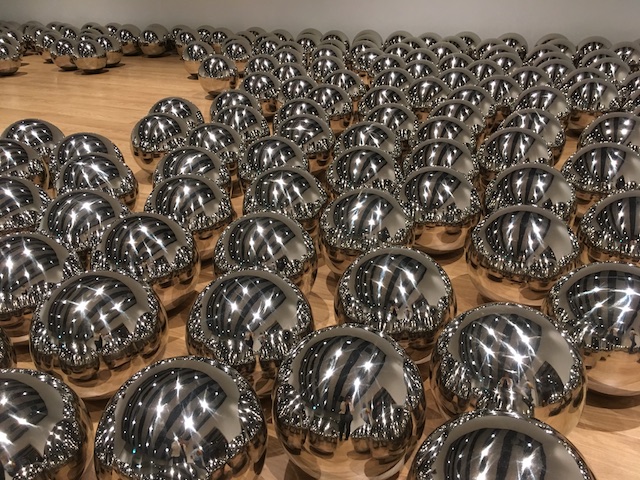 I can describe it as another kind of selfie obsessed illusion that may take over mankind!

Roni Horn’s Untitled work piece captivated my eyes and mind for a while! What was presented was a giant purple solid cast glass with a glass surface that looked ‘alive’, or better at first glance, it looked like a huge vase full of water! 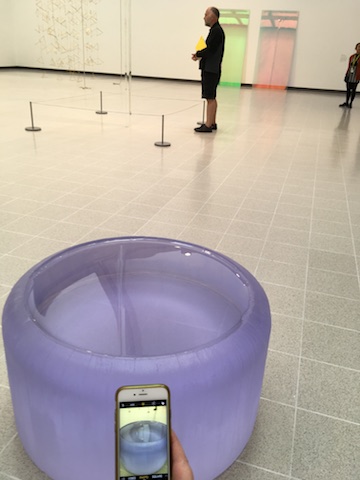 The illusion was right in front of my eyes and what was really concerning was that my eyes where not giving the correct information to my brain! All I could ‘see’ was a liquid effect inside the ‘giant vase’ and in whatever positions I looked at it, the illusion did not stop! Horn demonstrates the diversity of perceptual effects using glass by exploring colour in radically different ways. His large cast-glass lozenge Untitled carried the message “Everything was sleeping as if the universe were a mistake”.

The earliest works in this group show are often associated with the ‘Light and Space’ movement which originated in the mid-1960s in the Los Angeles area. At this time, a number of the American artists included in the exhibition were experimenting with unconventional materials and innovative fabrication processes. De Wain Valentine pioneered the use of resin to create large-scale translucent sculptures including his 1.5-tonne Gray Column (1975–76), shown for the first time in the UK. One of the few female artists associated with Light and Space, Helen Pashgian contributes several epoxy and acrylic spheres and a series of large acrylic columns which use varying degrees of transparency and light to generate optical effects.

Many of the works created by these artists allow viewers to both see into as well as through the material of a solid sculpture. Robert Irwin’s work Untitled (Acrylic Column), 1969–2011 is a monumental and majestic clear acrylic column that rises over 4.5 metres in the Hayward’s upper gallery, yet is almost imperceptible, save for its refractive properties.

Larry Bell, who explores similar concerns through the medium of glass, is represented in the exhibition by his first large-scale installation Standing Walls (1969/2016). 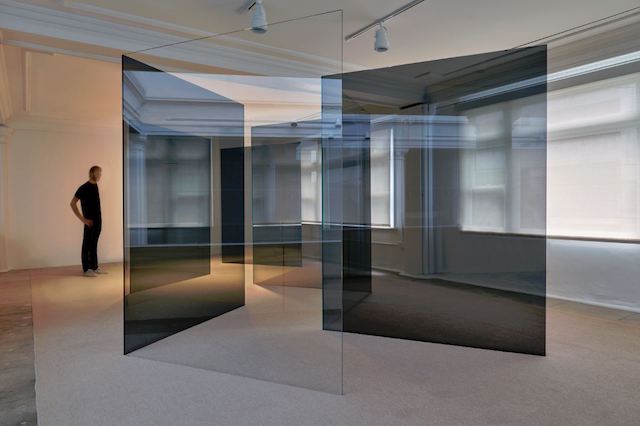 Viewers can enter to experience its compounding reflections and effects whilst seeing themselves within the sculpture.

Last but not least the most impressive and almost shocking installation was 20:50 (1987) by Richard Wilson which occupied an entire gallery upstairs. Thousands of litres of recycled oil form a waist-high horizon that surrounds the viewer as they proceed down a gangway spliced through the inky liquid. The artwork’s glossy surface mesmerisingly reflects the Hayward Gallery’s new pyramid roof lights and the open sky beyond. London Mums’ magazine editor Monica Costa and I walked slowly onto the small gangway surrounded by the oil tank breathing a heavy oily smell and almost feeling the density of the liquid on our shoulders. 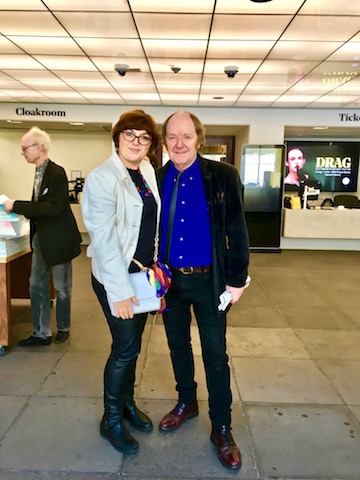 Art is powerful when it awakens such strong feelings and Monica and I were certainly moved by this 360 degrees sensory experience. We were lucky enough to discuss this with the artist in person, who attended the exhibition, and who thought that having these strong ‘negative’ feelings about it was good for him. He compared the experience of his monumental installation to an episode of Doctor Who.

With spatial perception at its centre, Space Shifters is a fitting conclusion to the Hayward Gallery’s 50th anniversary, highlighting and making the most of some of the renovated building’s salient architectural features.

Space Shifters is an exhibition of a kind and I have never seen so many different yet similar works of art that explore the meaning of illusion in such a way. You cannot just watch pictures and understand what it is. This is an exhibition that you need to experience first hand.

This entry was posted on Wednesday, September 26th, 2018 at 3:49 pm and is filed under Attractions. You can follow any responses to this entry through the RSS 2.0 feed. Both comments and pings are currently closed.