PRINCE HARRY IS 30 & AROUND FOR SELFIES AT MADAME TUSSAUDS

Fans of Prince Harry unable to attend the Invictus Games will not miss their chance to meet him as Madame Tussauds London has revealed a new wax figure of the Prince in celebration of his 30th birthday. I am never been a huge fan of wax statues but I attended an exclusive press event in 2011 at Madame Tussauds when the museum was closed especially or us. We truly enjoyed a party atmosphere surrounded by all these ‘celebrities’ then. This seems by far the best wax statue on display. It really looks like the real Prince who should consider using it to please the ladies who want selfies with him. At the end of the day he’s the most sought after bachelor in the world 🙂 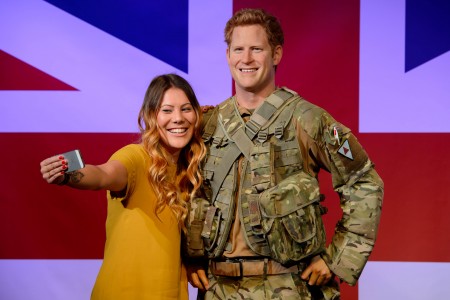 The new figure replaces his previous figure, which wore a traditional blue dress suit and first featured at the attraction in 2006.

The new style is more reflective of the much-loved Prince’s recent career as an Apache Helicopter Pilot and his status as Captain Harry Wales of 3 Regiment Army Air Corps. The figure portrays the heroic young Royal in a relaxed pose, dressed in his army combat fatigues.

The new figure is in the Royal area at Madame Tussauds London, in the familiar company of the Prince’s father and stepmother, The Prince of Wales and Duchess of Cornwall, as well as The Duke and Duchess of Cambridge, Her Majesty the Queen and The Duke of Edinburgh. 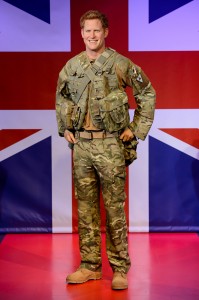 Madame Tussauds Studios London has been making wax figures for over 150 years. Each masterpiece takes four months, and a team of 20 dedicated sculptors, to create.  Over 500 precise body measurements are referenced, real head hairs are inserted one by one, and countless layers of paints and tints are applied to build up skin tones – all to achieve the kind of astonishing realism that has kept Madame Tussauds world renowned for over two centuries.

This entry was posted on Wednesday, September 10th, 2014 at 7:20 pm and is filed under Attractions. You can follow any responses to this entry through the RSS 2.0 feed. Both comments and pings are currently closed.