The Noise Next Door improv show – exclusive behind the scene interview

I am delighted to present this exclusive interview with Sam Pacelli On behalf of comedy group The Noise Next Door who will be performing their brand new tour in London on 19th March 2015. Selling out all their tours and Edinburgh Fringe runs for seven consecutive years there is a phenomenal demand for their incredibly funny improv shows!

They will be splitting sides and breaking hearts as their parade of sharp suits, catchy songs, quick fire wit, enviable rapport, banter and stories roll into towns across the UK. 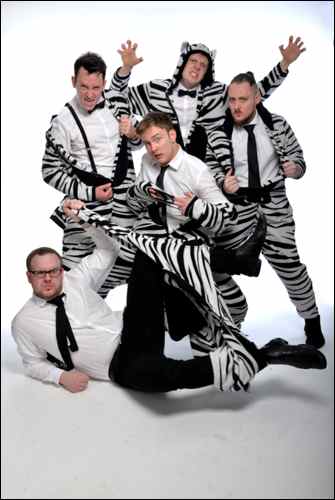 Holding court like modern day troubadours or travelling court jesters, ripples of excitement and delight pass through their excited audiences as the boys stroll onto the stage for an hour of pure entertainment. It is one show not to be missed.

With absolutely no script, they have an uncanny knack of transforming audience suggestions into fantastically funny scenes and songs in the blink of an eye with a perfect blend of ludicrous characters, witty one-liners, epic stories, and explosive physicality, underpinned by their infectious, feel good brand of humour.

Q: Hallo boys!  You are not just a boy band. How would you describe what you do in your show?

Sam: Well we’re not technically a boy band at all! But if we were, we’d definitely be a man band by now… We’ve been told that we’re the boyband of comedy, probably because there’s 5 of us, we do comedy, we’re smoking hot and filthy rich. While a couple of those facts might not be applicable, we’re an improvised comedy troupe, so our show is filled with audience suggestion that fuel scenes and song for a night of raucous entertainment.

Q: How did you come up with this original format?

Sam: We were big fans of ‘Whose Line Is It Anyway?’, and having originally mimicked the show in our very early days, realised there was a place on the comedy circuit for a modernised version. We knew we wanted to include a little more music but also to keep the gag rate as high as possible. Our relationships with each other are also key to the performance, and those have developed organically over time and become an integral part of the show. It’s incredibly inclusive, and we welcome the audience in to the fold to create an immersive experience.

Q: a little bird told me that you have no script and I guess every show is completely different. How do you manage the ‘surprises’ every night? Do you have like a general crisis management to deal with different audiences’ reactions?

Sam: Scripts are a heinous waste of paper. While the content for the show is entirely improvised, there is a certain structure to what we do. We don’t just turn up to a venue and hope! We play short form, improvised games, and within each game there has to be a framework around which the audience suggestions revolve. There’s no crisis management for unusual suggestions, because there’s never really any crisis. However surprising a suggestion may seem, there’s very likely been a worse one at some point. If someone shouts out something offensive, we deal with them, or if an incredibly local reference comes up that we have no clue about, we highlight that fact and make fun of it. We pride ourselves on being able to work with absolutely anything a crowd can throw at us. 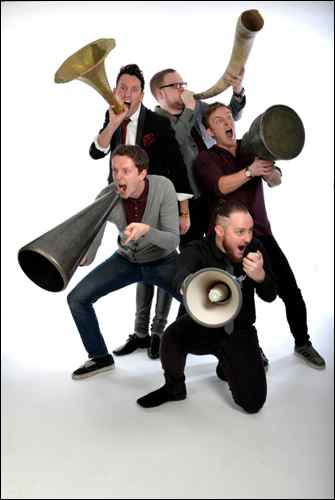 Q: Who inspired your act and music?

Sam: As mentioned, ‘Whose Line Is It Anyway?’ had a huge impact on our genesis, but we’re inspired by an array of comedians from Buster Keaton to Jim Carrey, Tommy Cooper to Tim Minchin.

Q: If you were joint Kings of Britain what would you do first?

Sam: Immediately have the other four executed. You can’t run a kingdom with five Kings. History has taught as that.

Sam: We’d just like to be remembered as a group who could give you a guaranteed night of entertainment. We offer nothing but giggles, and if people recall seeing us and knew they had fun, then we can look back on a successful career.

Q: What are you up next (after the tour is finished)?

Sam: Sleeping mainly. And we have holidays planned. It’s been a long tour! But after that, we’ll be at the Edinburgh Festival for a month running two different shows, and there’s a bunch of exciting projects in the pipeline post Edinburgh.

Q: What sport will you watch during the Rio Olympics this Summer?

Sam: Every. Single. One. We’ve been in Edinburgh for the whole of the last two Olympics, and this year will be no different. It’s constantly on the TV in our flat, and will lead to the inevitable discussion of who of us would win each individual event if pitted against each other.

Q: What is your favourite London attraction and why?

Sam: London has so many attractions. It’s impossible to pick a single one, which is why we’ve always loved walking along the Southbank. The walk from London Bridge to Waterloo is pretty much a walking tour of London’s highlights. You can take in Borough Market, the Golden Hinde, the Globe, the Tate Modern, Millennium Bridge, you can see St Paul’s across the Thames and enjoy the vibrancy of the Southbank area itself, finishing at the London Eye with glorious views of Westminster. On a sunny Spring day, there’s no walk like it.

This entry was posted on Tuesday, March 15th, 2016 at 11:05 am and is filed under Attractions. You can follow any responses to this entry through the RSS 2.0 feed. Both comments and pings are currently closed.