This Christmas at the Olivier theatre (inside the National Theatre at Southbank London), Rufus Norris directs Hex, a vividly original retelling of the Sleeping Beauty fairy tale with music by Jim Fortune, book by Tanya Ronder, designs by Katrina Lindsay and magical choreography by Jade Hackett. 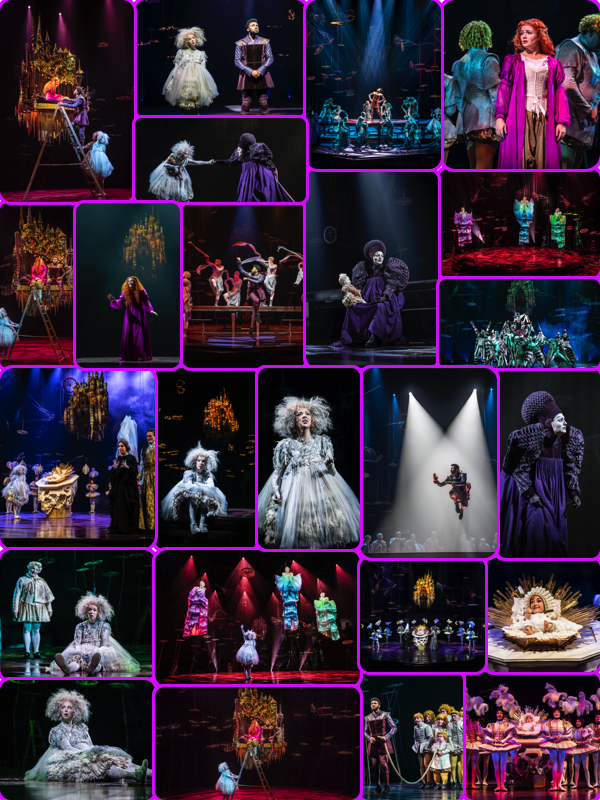 Princess Rose (Scottish speaking Rosie Graham) is a sleepless baby (all mother can relate to this). Her mum, Queen Regina, is so exhausted that she does not think twice and calls Low Fairy (played by Irish singer Lisa Lambe) for the job, who feels lonely in the wood as her fellow fairies have wings and fly high. So longing for someone to bless, when she is summoned to the palace to help the princess sleep, she is very happy. However, her dream turns into a nightmare and her blessing becomes a curse. Soon, she is plunged into a frantic, hundred-year quest to somehow make everything right.

I love classic fairy tales so much that I often hate any revisitation. With one exception, though: Hex. This unique adaptation and new twist on the classic story of Sleeping Beauty is two-hour and 30-minute long but it’s pure joy and fun.

You might think that’s a long run-time for families with young children but I’d dare say that it isn’t. Hex has never dull moments. In fact, there are lots of engaging humorous moments: for instance, when Rose appears as an adult in the cradle; when half-ogress half-human Queenie, played by the super-talented Victoria Hamilton-Barritt, demands humans to eat even if she has to sacrifice her grandchildren.

Prince Burt (Michael Elcock) has lots of hilarious and ironic gags, too.

There are a few dark moments, all connected with Queenie and her cannibalism, but they don’t escalate so the play is safe for children to watch in its entirety.

The illuminated Disney-style palace hanging from the ceiling turns out to serve both the purpose of being the castle from the distance but also Sleeping Beauty’s bed.

The original music is very good, although there is not a song that stands out and is memorable. Highlights include songs such as The One, I Know What I Am and Above It All.

The theatrical effects are breath-taking: ostrich feathers in abundance, dry ice, fairy’s aerial work, and glow in the dark optical illusions give the stage of the National Theatre a Cinematic choreography look and feel. They are beautiful because they are not overwhelming.

Irish singer Lisa Lambe plays the Low Fairy looking more like a Celtic goblin than a traditional fairy. Her voice is lovely and magical at times. The songs are very emotive.

Francesca said: “It is the best and most original show I have ever seen in London. Scenography is essential but yet spectacular. Prince Bert is funny.  Everything is elevated to perfection. This show has the wow or X-factor in theatre land. Quality.”
Mum of three Elaine: “I cannot fault it.  I am Scottish so I love the fact that Princess Rose sings with a Scottish accent. Go and see Hex, if you can.”
Tickets for Hex available from the Olivier theatre, National Theatre, London. The show runs until 14 January 2023. Absolutely unmissable!

Family Christmas activity: The Nutcracker by the English National Ballet at the Coliseum 17 Dec 22 –7 Jan 2023

Mums Day Out: 11 Relaxing things to do in London, minus the kids

Panto in the Pod: Christmas Panto Pod on the London Eye

This entry was posted on Monday, December 19th, 2022 at 11:25 pm and is filed under Attractions. You can follow any responses to this entry through the RSS 2.0 feed. Both comments and pings are currently closed.