It was a real honour for me to chat with Don McLean, who is an iconic sing-songwriter and author of masterpieces such as American Pie, Vincent (Starry, Starry Night), Castles in the Air, Cryin, And I Love You So, Wonderful Baby, Since I Don’t Have you, It’s Just The Sun & If We Try.

During the interview (on Zoom) he briefly sang for me to demonstrate how to control a slow song. He was charming and wise. I learnt so much about music with his thoughts on song-writing. He has inspired so many generations of musicians. Madonna, Drake and Garth Brooks are amongst many artists who have also recorded Don’s songs. He is also an inductee of the Grammy Hall Of Fame, Songwriters Hall of Fame and is a recipient of a BBC Lifetime achievement award.  This year he was awarded a star on the Hollywood Walk of Fame, which can be found in front of The Pie Hole Bakery, between Hollywood and Vine. 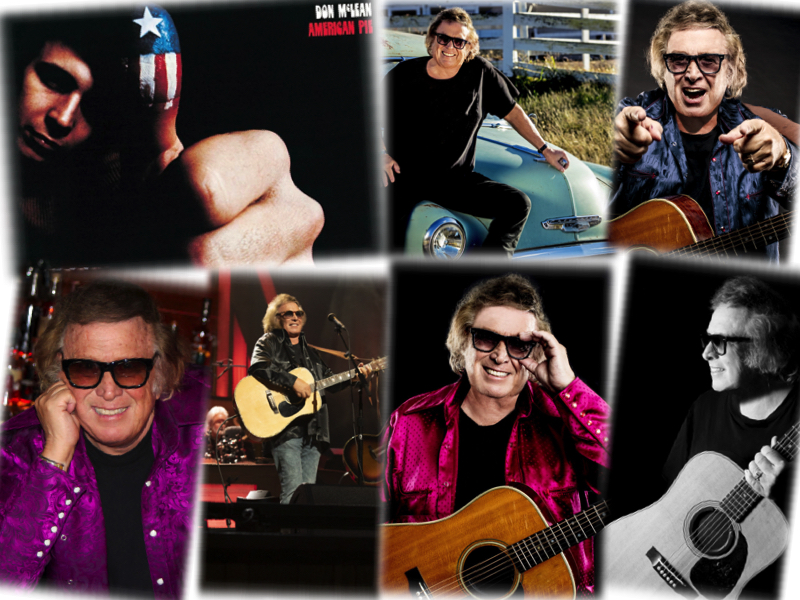 American Pie was released in 1971 as a double-A single and it charted within a month. Interest from the media and public sent the single to #1 in the U.S. and Don to international stardom. Despite decades of attempted interpretations, Don has always remained enigmatic as to the songs meaning & the mystery remains to this day!

Now, 50 years later, American Pie is named one of the top 5 songs of the 20th Century (by the Recording Industry of America).

A New York native, Don McLean is one of the most revered and respected songwriters in American history. His song And I Love You So was the theme for Prince Harry and Megan Markle’s wedding. American Pie appears in the Avengers’ Black Widow and the upcoming Tom Hanks movie Finch. Next up for Mclean is a children’s book expected to be released in 2022. Don is such a genius but yet always humble.

Don: Yes, tickets are going on sale for this tour in Europe, the UK, Ireland and Scotland centred around the 50th anniversary of the American Pie album.

Q: You have written such iconic songs. I don’t think there is a person on the planet who doesn’t know American Pie. Which song is your favourite one out of your huge repertoire?

Don: I have been lucky I have favourite songs that are also my most famous hits. Sinatra, for example, hated Strangers in the Night and that was his number one hit.

Vincent is probably one of the best songs I wrote and I always enjoy singing it. I love performing them all but that is a special song.

What I tried to do when I was starting out at 17 was to walk around at night and sing very slow Nat King Cole and Sinatra songs trying to control them like when a photographer has a control over milliseconds and musicians have to have a fine touch and have control over very small amounts of time. That’s what I was working on. Today everything is fast and that doesn’t require any subtlety. You just yell it out there. I was working on something that was subtle back then and I was lucky to have Vincent and I love you so that became famous despite being slow songs.

Q: What kind of audience do you get at your gigs these days?

Don:  It’s quite a mixture. Whatever you try to do you want to make sure that you do it at your absolute best. You have to always be 100%. That does not necessarily mean that you have to be in perfect health. For example, I love cabaret singer Mabel Mercer from the 1930s who was adored by elite wealthy people of Europe. She would do shows with another wonderful cabaret singer, Bobby Short. They would play Town Hall in Florida, New York City and all the richest people would show up to listen to them. Mabel had a lung removed so she sang in a more breathless way and spoke the words more than singing them. She was actually better in this version than when she was young and used to sing very high notes. She evolved into a new style.

Al Jolson, the greatest entertainer of the first half of the 20th century, used to sing very high notes but when he got older he was frustrated that he could not reach the high notes any more. He went to Korea to play to the boys but his piano player suggested to him to sing the low notes.  And he created a whole new style which was very effective.

You don’t have to sing perfectly as you grow older. You can find a new way of communicating.

Q: So how do you communicate with your audience now that you are more mature? What’s your new trick out of the hat?

Don: I keep writing new songs. I’ve got an album with new songs coming out and I’ll throw three or four of those in a show. When that happens, it changes the chemical value of the other songs. The new song ‘on the block’ stands up against the old songs and creates a new vibe. If you can do four or five of those successfully you’ve got a whole new act.

You can become very stagnant in this business. When artists get older, they get tired and bored of playing the material they’re known for. They try to fake it and do it for the money but it’s not fun.

What makes it fun is if you can create new things all the time and then the old songs are more fun to play because they’re contrasted against new colours.

When older artists play material for 20-30-40 years, sometimes they start to screw around with the songs and they mess up because they’re trying to keep their own interest in it. I’ve never heard Mick Jagger sing any of his songs that way. He always sings them like he always did. He might be bored with it but he knows the audience loves it. Satisfaction is always sung in a certain way.

At the end of his career, Elvis Presley ruined a lot of songs like Don’t be cruel to play them in new ways.

Q: What else would you like to achieve on top of all your successes?

Don: I want to surprise people with a new record. If I can’t do that, at least I want to make an album that, if you look back on 10 years from now, you’d think that they are good songs that some young singer might want to use. That’s all I care about: writing good songs and giving a great performance on stage.

Now I am focusing on the 2022 tour that will begin in September, the new album and a documentary movie.

Q: How has the music scene changed since your beginning?

Don: We have a Black and Hispanic audience now that has created an enormous wealth for their artists. This is the new reality. It’s not a white game anymore, but it’s for all the talented people regardless of where they come from. New kinds of music. New kinds of energy. It’s very good and I’m just thankful that anybody wants to hear anything from me because it’s so different.

Monica: Our time is up and it’s such a shame but the date of your London gig is in my diary (4 October 2022 at the Palladium).

Don:  I won’t forget you, Monica, that’s for sure.

This entry was posted on Monday, December 13th, 2021 at 11:03 am and is filed under Attractions. You can follow any responses to this entry through the RSS 2.0 feed. You can skip to the end and leave a response. Pinging is currently not allowed.