On 8th September 2022, people all joined together, wherever they were in the world, to both celebrate the life of an extraordinary woman, Her Majesty Queen Elizabeth II, and also to mourn her loss. She leaves behind the richest of legacies, and due to her indefatigable spirit and commitment to serve her people, many of us feel as if we have lost someone very close to us. Our family is our lasting legacy, and the Queen was Mother to four children, Grandma to eight grandchildren, Gan-Gan to twelve great-grandchildren, and the mother of the British nation.

There’s no better way to celebrate Her Majesty The Queen’s life and her historic Platinum Jubilee year than a visit to Buckingham Palace. While The Palace can’t guarantee a chaotic tea party with Paddington Bear, this remarkable location offers the ultimate royal experience at the home of the British monarchy. 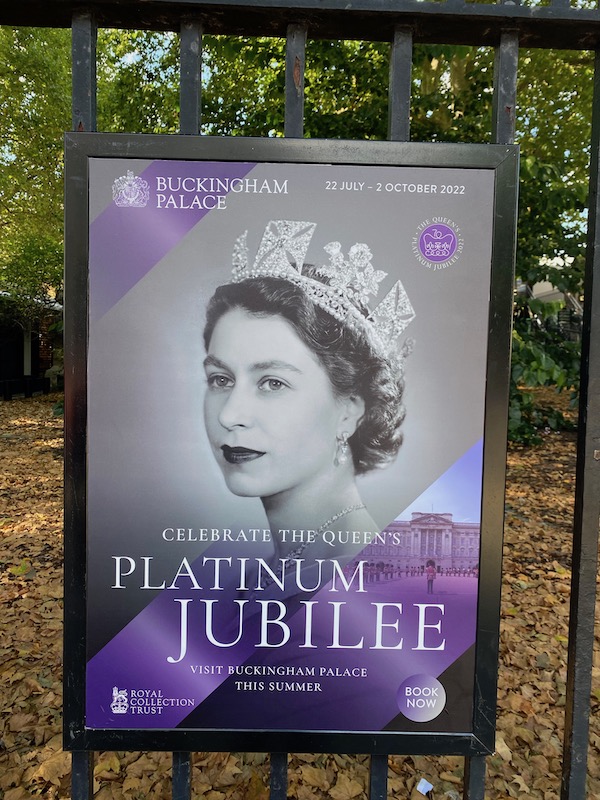 A few weeks ago, before the Queen’s passing, I took teen reporters Alice and Diego to the Palace to visit a special display Platinum Jubilee: The Queen’s Accession celebrating the start of Her Majesty’s historic reign from her Coronation in February 1952 and focusing on 24 official portraits of The Queen taken by the photographer Dorothy Wilding. For the first time, Wilding’s original hand-finished prints are shown alongside items of jewellery worn by Her Majesty for the portrait sittings, some of which have never been on public display before. The remarkable series of portraits formed the basis for the profiles and silhouettes of Her Majesty that we see on stamps and coins to this day. This photographic exhibition comes to life with the real objects next to the photos.

Dorothy Wilding began taking photographs of members of the Royal Family in the 1920s. In May 1937 she became the first official female royal photographer when she was appointed to take the portraits at the coronation of King George VI and Queen Elizabeth. 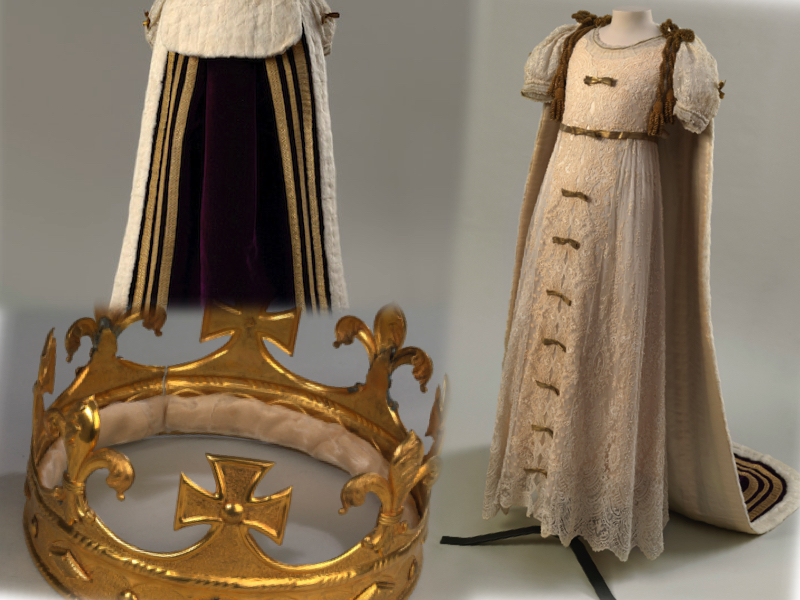 The 11-year-old Princess Elizabeth featured in the photographs along with her sister Princess Margaret, and the display at Buckingham Palace will include the embellished cream dress, purple robe and gold coronet worn by the young Princess for her parents’ coronation. 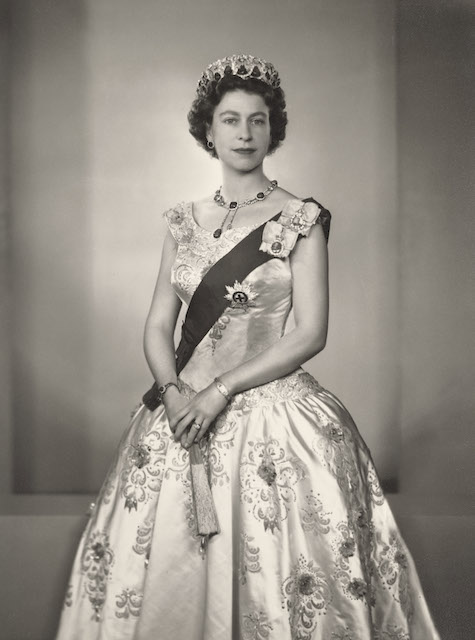 Ten years later in July 1947, Wilding was called upon to capture the official engagement portraits for Princess Elizabeth and Lieutenant Philip Mountbatten, and in February 1952 she was commissioned to take the first official photographs of the new Queen Elizabeth, just 20 days after the Accession. The series of photographs that Wilding took during this session and a second session two months later have become some of the most enduring images of the Royal Family, and of 20th-century Britain more generally, as they form the basis for the profiles and silhouettes of Her Majesty that we see on stamps and coins to this day.

Many of the items of jewellery worn by The Queen for the portrait sittings held personal connections for the young monarch. They included a sapphire and diamond Cartier bracelet, which was given to her by her father King George VI as an 18th birthday present in 1944. Another birthday gift was the South Africa necklace, given to Princess Elizabeth for her 21st birthday by the Government and Union of South Africa. The necklace originally consisted of 21 brilliant-cut diamonds, but in 1952 it was shortened and the six removed stones were made into a matching bracelet, which is  on display.

One of Her Majesty’s most recognisable jewels is The Girls of Great Britain and Ireland Tiara. The diamond tiara was a gift to the future Queen Mary, on the occasion of her marriage to the future King George V in 1893. 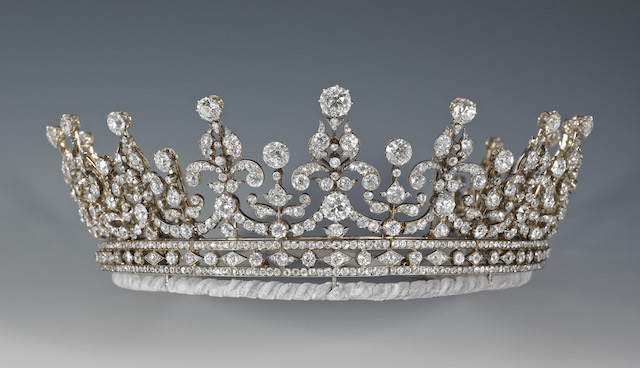 Queen Mary in turn gave the tiara as a wedding present to her granddaughter, Princess Elizabeth, in November 1947, along with the Dorset Bow Brooch and a pair of diamond bangles. The bangles, on display for the first time, are thought to have been made in India, where traditionally one would be worn on each wrist to signify matrimony. 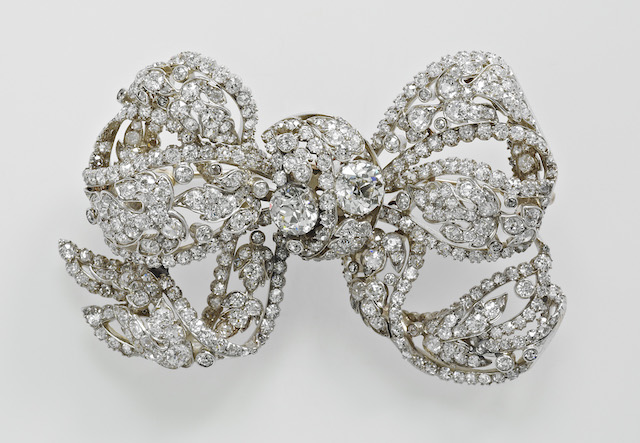 Another wedding gift was the Nizam of Hyderabad necklace. The Nizam (ruler) of Hyderabad left instructions with the firm of Cartier in London that Princess Elizabeth should select a wedding gift herself, and this platinum necklace set with approximately 300 diamonds was chosen. The Queen wore the necklace for her second sitting with Dorothy Wilding in April 1952, and it was these photographs that were chosen to form the basis of Her Majesty’s image on postage stamps from 1953 until 1971.

The second photographic sitting was organised so that additional portraits could be taken of The Queen wearing a coronet, as this was felt to be more appropriate for official use on coins and postage stamps. A crown could not be worn as the Coronation was not to take place until 2 June 1953, and so the Diamond Diadem was selected. 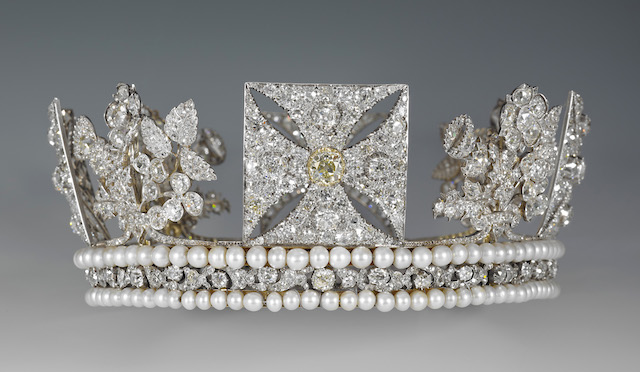 Originally created for George IV’s extravagant coronation in 1821 and set with 1,333 brilliant-cut diamonds, the Diamond Diadem was worn by The Queen on the day of her Coronation and has been worn by Her Majesty on her journey to and from the State Opening of Parliament since the first year of her reign.

I could not take my eyes of these diamonds which were extremely shiny and almost glowing. Photographs don’t give justice to these jewels.

The Queen’s final sitting with Dorothy Wilding took place in May 1956, shortly before Wilding retired. The portraits were commissioned by the Bank of England for new currency, though ultimately the images were not used. The Queen is shown wearing the Vladimir Tiara, which was made for Grand Duchess Vladimir of Russia around 1874 and sold by her daughter to Queen Mary in 1921. Inherited by The Queen in 1953, the tiara is unusual in that it can be worn in a variety of ways, as its pendant emeralds can be removed or substituted for pearls.

Her Majesty also chose to wear the spectacular Delhi Durbar necklace for this final sitting. 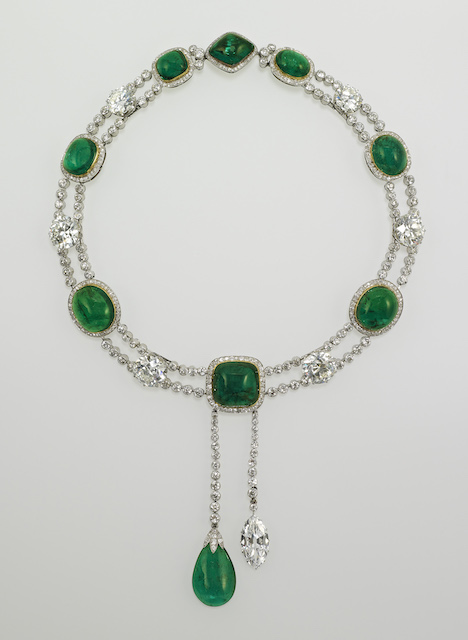 The necklace incorporates nine emeralds originally owned by Queen Mary’s grandmother, the Duchess of Cambridge, as well as an 8.8 carat diamond pendant cut from the Cullinan diamond – the largest diamond ever found. It was made for Queen Mary as part of a suite of jewellery created for the Delhi Durbar in 1911, and was inherited by Her Majesty in 1953. The accompanying emerald and diamond earrings is also on display for the first time.

There is so much to see and do in and around Buckingham Palace and we spent three solid hours inside on top of one hour in the gardens having afternoon tea and scones in the coffee shop open to the public.

Here’s what 16 year old Alice and Diego had to say at the end of the tour. 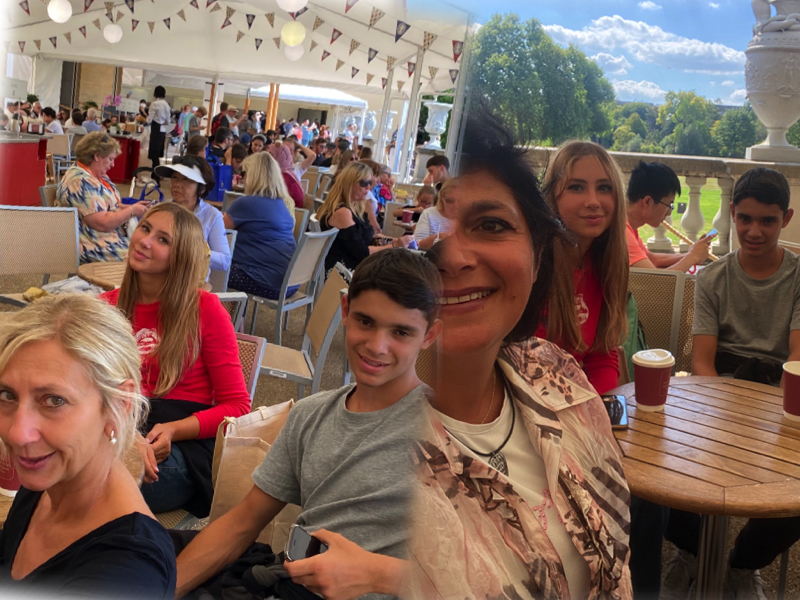 Alice Battistuli: “I had always wondered what the Queen’s house would be like and finally this summer I got the chance to visit it myself.
From the moment I witnessed the changing of the guards, I was astonished by the sheer size of the palace, which was even bigger than what I had imagined.
The tour of Buckingham palace was enjoyable and at the same time really informative thanks to a detailed free audible guide that visitors are given at the beginning of the tour.
If you choose to use the audible guide, you won’t miss any detail and you will learn interesting facts and information. 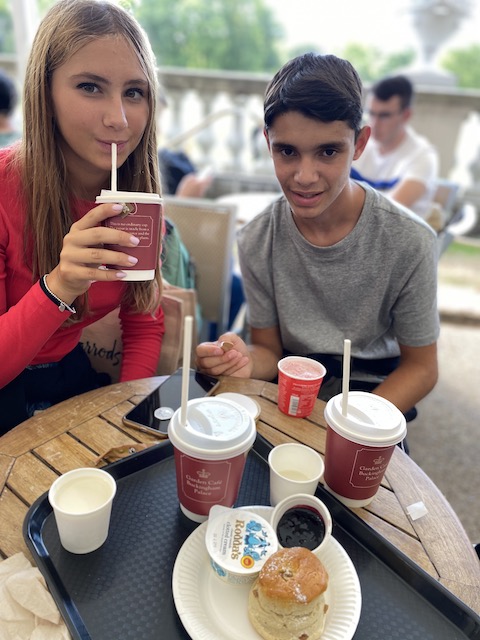 Every single room of the palace is wonderful, but I personally loved the one in which the royal collection of paintings is kept, called The Gallery.
The exhibition of the Queen’s jewellery and photographs is another section inside the palace that you can’t miss. In fact, they’re unique and they will certainly leave you breathless.”
Diego Scintu added: “At the end of the tour, I loved walking around the park that surrounds the palace. I also enjoyed having the typical English scones and pastries sipping hot tea while making the most of the marvellous view! The goodies were a bit overpriced but worth buying if you want to hang out a bit longer in the gardens. Unfortunately, we were not able to view the whole palace as it is a tour of only the official rooms.”
The 19 State Rooms are the public rooms in the Palace where members of the Royal Family receive and entertain their guests on State, ceremonial and official occasions. They reflect the taste of George IV, who commissioned the architect John Nash to transform Buckingham House into a grand palace in 1825. The Gallery includes paintings by Canaletto, Van Dyck, sculpture by Canova, and some of the finest English and French furniture in the world. 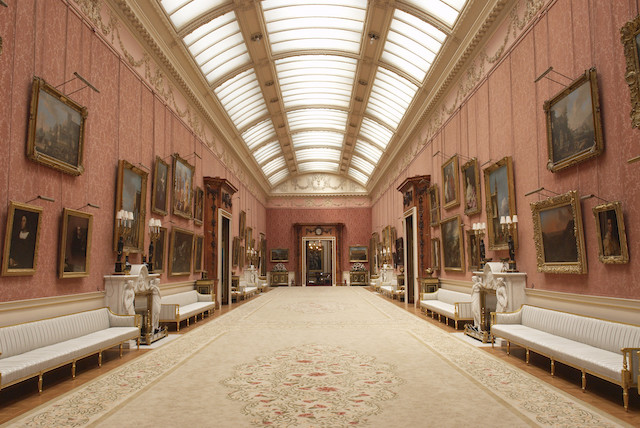 The Throne Room was used by The Queen for court ceremonies and official entertaining, and was the setting for the wedding photos of The Duke and Duchess of Cambridge. Central to the room is the pair of throne chairs which were used for the coronation ceremony of The Queen in 1953. One is embroidered with ‘EIIR’ was used by The Queen at the beginning of the Coronation, up until the point that she was crowned. 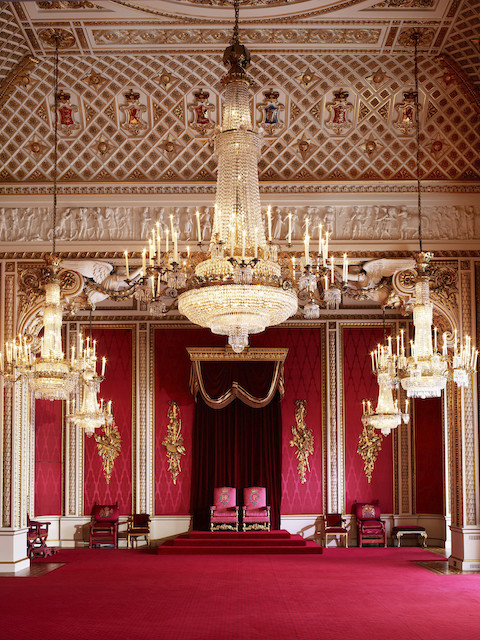 The Ball Room, completed in 1855, is the largest of the State Rooms, and used today for official purposes, including investitures and State Banquets. 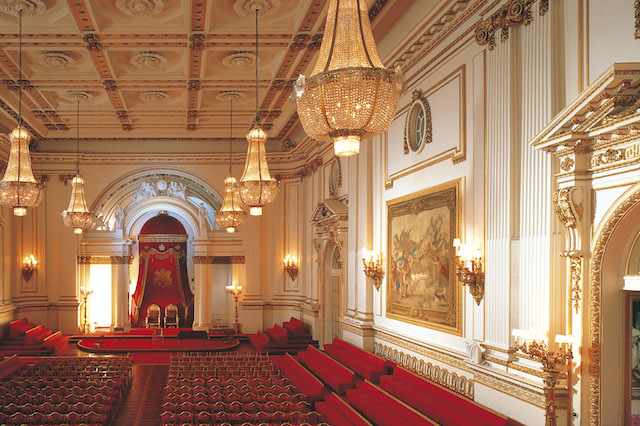 The Music Room, completed in 1831, is where royal babies are sometimes christened – The Queen’s three eldest children were all baptised here in water brought from the River Jordan. 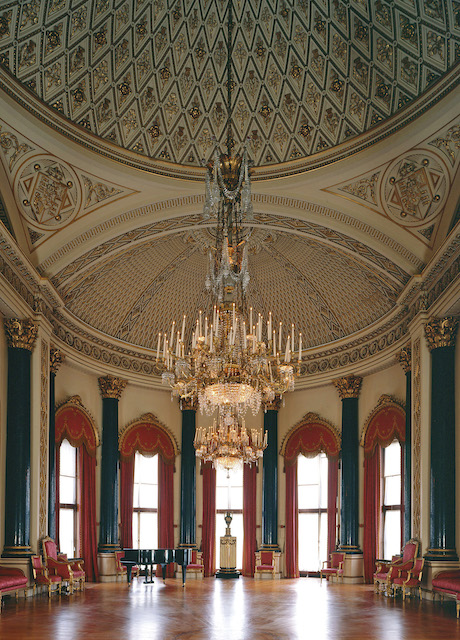 The 47-metre Picture Gallery  displays some of the greatest paintings in the Royal Collection including Italian, Dutch and Flemish works mainly from the 17th century, grouped by subject and artistic nationality. Among the artists represented are Titian, Rembrandt, Rubens, Van Dyck and Claude.

The Picture Gallery has always been used for official entertaining.  Today it is the setting for receptions hosted by The Queen and members of the Royal Family to recognise achievement in a particular walk of life or sector in the community.  It is also here that the recipients of honours wait before being led into the Ballroom for their investiture.

We could not take any pictures inside the State Rooms so we took them while we were in the gardens and in the beautiful shop. 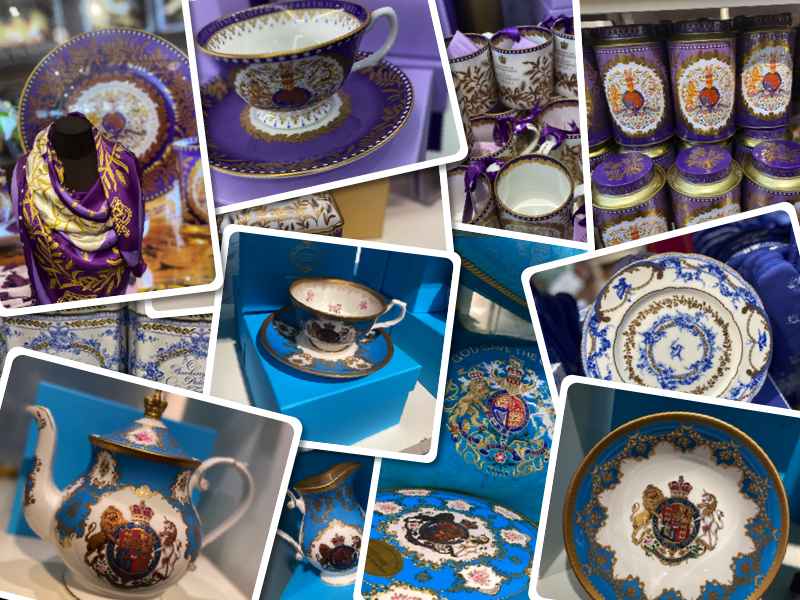 No matter how many times I have visited Buckingham Palace, every time I notice a new detail that I previously missed. It’s a London attraction that families would enjoy visiting regularly and the best way to pay tribute to the Queen. 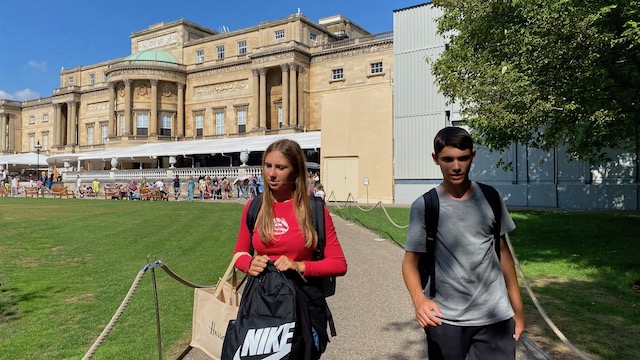 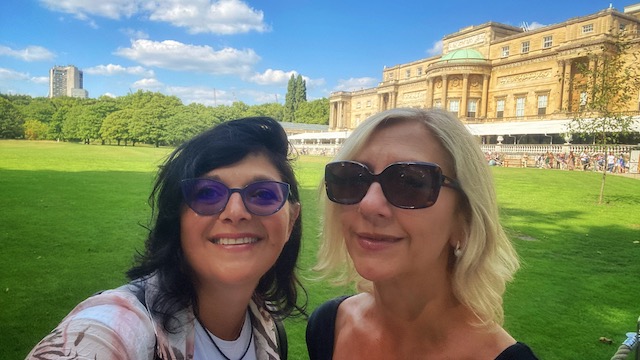 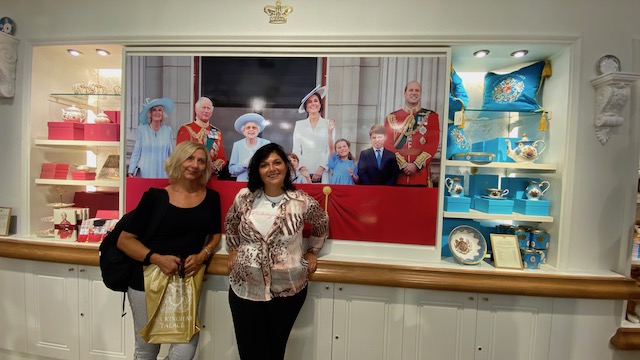 Platinum Jubilee: The Queen’s Accession is included in a visit to the State Rooms at Buckingham Palace open until Sunday, 2 October 2022.

This entry was posted on Tuesday, September 13th, 2022 at 3:29 pm and is filed under Attractions. You can follow any responses to this entry through the RSS 2.0 feed. You can skip to the end and leave a response. Pinging is currently not allowed.